The Girl Next Door 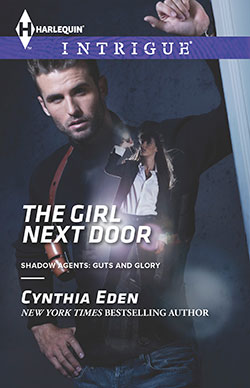 When Gabrielle Harper’s gutsy investigative reporting attracted a serial killer, her new neighbor began keeping an eye on her. But Cooper Marshall was more than his chiseled frame suggested. He was an Elite Operations Division specialist who thrived on adrenaline, who always took risks, whose every instinct was geared to protect. Even if it meant breaking cover. Gabrielle wasn’t the sort to hole up in her Washington, D.C., walk-up, waiting to be the next victim. So when the time came, he’d throw her on the back of his motorcycle and ride with a vengeance to save her life. Until then, he’d watch and wait, and try not to get carried away with attraction to the girl next door….

(Excerpt from THE GIRL NEXT DOOR by Cynthia Eden. © Reprinted by permission. All rights reserved.)

He turned toward her and cocked his head. Then his eyes, a shade of a blue that electrified her, narrowed. “You’re scared.” He stalked toward her.

Gabrielle stiffened at the accusation. “I’m a little shaken. I found a dead body. I get to be shaken.”

He stopped less than a foot from her. “I’m sorry you had to see that.”

“Yes, well, I’m sorry that Mr. Lockwood is dead. Maybe if we’d met earlier, if I’d just gone by his place sooner instead of waiting for our meeting time—”

“Then you might be dead, too,” he said, cutting through her words.

Gabrielle pushed back her hair. “He asked me to meet him. He called and said that he had a tip for me.” So much blood. “I guess someone wanted to make sure he never got the chance to deliver that tip.”

He took her hand.

Her breath rushed out. In four months, he hadn’t touched her. Until tonight. He’d touched her at the crime scene, and now he was touching her here.

She hadn’t expected his touch to unsettle her so much. But it did. Awareness pulsed through her as she stared into his eyes.

“Come with me,” he invited softly. “You shouldn’t be alone after what happened.”

Wait, those words had come out wrong. That was her problem. She was good at writing. When she was talking, Gabrielle had a tendency to say the wrong thing. She cleared her throat and tried again, “What I meant was that I don’t mind being alone. It’s late, and I should be getting upstairs.”

He used his grip on her hand to tug her toward him. “It’s late all right, but I’m betting you’ve got so much adrenaline pumping through your body that sleep is the last thing on your mind.” His eyes glittered down at her. The guy easily topped six foot two, maybe six foot three, and he had the wide, broad shoulders that a football player would envy.

When she looked up at him then, she didn’t see the danger that she normally perceived.

“I know a thing or two about adrenaline rushes. I can help you ride it out.”