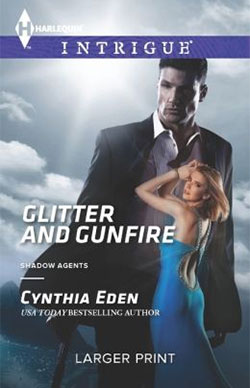 Update: Harlequin has retitled and re-released this book–GLITTER AND GUNFIRE is now listed as BULLETPROOF. It is the exact same story, just with a new title.

He was assigned to protect her—not make her his own—in this installment of USA TODAY bestselling author Cynthia Eden’s Shadow Agents series.

Cale Lane had his orders: keep Cassidy Sherridan alive at all costs. But who sent six armed men storming the Rio ballroom to take her out? The gorgeous party girl wasn’t giving it up. Now he had a more urgent mission: uncover Cassidy’s secrets…one by one.

Cassidy didn’t need the former Army Ranger to play hero and blow her cover. Using herself as bait was the first step in bringing a killer to justice. How could she do that with Cale shadowing her every move…and awakening feelings that tempted her to put her life—and heart—on the line?

Please note: The print version of GLITTER AND GUNFIRE will be available on 8/20/2013, and the digital version will be released on 9/1/2013. The digital and print releases dates are determined by Harlequin.

Give him a dense jungle, the furious blast of gunfire and the adrenaline spike of a deadly mission any day of the week, but stick him in a stuffy ballroom like this—

This too-posh place might as well be hell to him. But, no, it wasn’t hell—it was Carnival. Elaborate decorations streamed from the ceiling in bursts of gold, green and purple. The tables were covered, decked out, and the band played on a stage that shimmered with light.

From his perch near the back wall, Cale shifted slightly in his tux. He was supposed to be blending in with everyone else, and he was trying his best. Blending was normally a specialty for him. He was used to being camouflaged on missions, but most missions weren’t like this one.

His eyes narrowed on the sleek blonde. The far-too-attractive, far-too-tempting Cassidy. He’d been sent down to Rio de Janeiro with the express orders to watch Cassidy.

And that was exactly what he’d been doing for the past five torturous days.

She looked up, then, her dark green eyes catching his gaze on her. For an instant, he thought tension might have tightened her delicate jaw, but then she smiled that slow, flirtatious smile that revealed the dimple in her right cheek.

She started walking toward him. Not that the woman walked so much as glided, and he had to admit she was sexy when she walked. No, Cassidy was sexy—period. The slit in her emerald dress parted, revealing legs that probably could have graced a runway someplace.

Her heels were high, vicious spikes, her dress was strapless, fitting her like a silken glove, and Cassidy…

He couldn’t let himself forget that. He hadn’t been swayed by a pretty face before, and he wasn’t going to start losing his cool now.

Cassidy held a champagne flute in one delicate hand. She nodded her head to a few people as she passed by them and said a couple of polite words while keeping her perfect smile in place. Some of the other guests were decked out in their Carnival masks. The celebration was going full swing in Rio. Earlier, Cassidy had even worn a small, delicate eye-mask.

The mask was gone now.

And she was right in front of him.

Still smiling faintly, she said, “You know, it would probably help things considerably if you stopped looking as if you were being tortured as you stood over here.”

He’d been tortured a few times. Memories that he didn’t want to relive, right then.

“It’s a party,” she continued in that husky voice that reminded him too much of dark bedrooms. “Not a prison.”

What would she know of prison? Or torture? Cale cocked a brow and let his gaze sweep over her. Cassidy Sherridan was a mystery to him. A gorgeous, too-fancy mystery. Her blond hair was swept back in a twist, the style accentuating her high cheekbones and those deep green eyes that made him think of things a soldier should not be thinking about.

Her nose was delicate, her chin a little too pointed. Her skin was flawless, golden, and she—

She was trying to distract him.

“Don’t you have admirers to entertain?” he asked, his voice a rough growl, one that was a direct contrast to the softness of Cassidy’s voice.

She laughed lightly. “And here I believed that I was entertaining an admirer. The way you’ve been staring at me all night…actually, for the past few days, it made me think that I did have an admirer in you.” Now it was her turn to study him. Her gaze sharpened. “Why have you been following me?”

Her scent, light, sweet, seemed to fill the air around them. “Sorry, ma’am,” he drawled, letting his Texas accent slip out deliberately. He’d long ago learned how to ditch and retrieve that accent at will. “But I think you have me confused with someone else.”

Cassidy shook her head. “No, I think it would be very hard to confuse a man like you with anyone else.” Her smile was still in place, but a brittle edge had entered her voice. Then, surprising him, she stepped forward. Her arms came up, as if she were hugging him, and he responded instinctively, wrapping his own arms around her.

Cassidy’s body was slender and warm against his. Because of her high heels and the fact that Cassidy’s own height skirted just above five foot eleven, their mouths were close. Temptingly close.

But she didn’t kiss him. She pushed up onto her toes. Her mouth slipped toward his left ear, and she whispered, “Stop tailing me before you ruin everything.”

He stiffened at her words and at the sudden hard jolt of arousal that knifed through him. Her breath blew lightly against his ear. His fingers tightened around her waist. To onlookers, Cale knew it would appear that they were embracing but, holding her this tightly, he felt the hard tension in Cassidy’s body.

Cassidy Sherridan was furious with him.

“I don’t care who sent you.” She whispered the words. He felt her lips press lightly against his ear. His body hardened. Then she said, “The last thing I need is an EOD agent in my way.”

An EOD agent. She did realize who—what—he was, and that was some very surprising news, mostly because there were only a few people in the world with enough clearance to know about the Elite Operations Division. According to the U.S. government, the EOD didn’t exist.

The Elite Operations Division operated far below the radar. The EOD agents had all been hand selected by Bruce Mercer, the man who seemed to be the EOD. The agents went out on the most deadly missions. They took the cases that others—in the official U.S. agencies—couldn’t handle. Their very success and survival depended on the EOD’s secrecy.

But this woman, who went to a series of parties, night after night, barely sliding into her hotel room past dawn, this woman with a dozen admirers always close to her, this woman who seemed to burn through ridiculous amounts of money in mere moments. She knew about the EOD?

So much for secrecy.

Her fingers pressed against his shoulders as Cassidy leaned back to study him once more. “I didn’t catch your name.”

Because he hadn’t given it to her. “But maybe that’s for the best,” she added with a little nod. “Since this is the end of our acquaintance.”

No, it wasn’t even close to the end.

“When I walk away in a moment, I expect you to do the same,” Cassidy told him.

The woman was giving him orders? Almost cute.

“Head to the back door. It’s ten feet on your right. Go down the stairs there. That’s the entrance and exit used by the staff at this event. None of the guests will notice when you leave.”

Ah, yes, she was giving him an order. And it wasn’t as cute anymore.

“I don’t want to see you again.” She was smiling as she said it, but her eyes had hardened. “Don’t get in my way.”

Then she turned and walked away.

His gaze slid over the slender column of her back. Far too much skin—such golden, perfect skin—was revealed by the plunging back of her gown.

She didn’t look at him. Just headed over to a pretty redhead, and the two women immediately started talking, their voices seemingly happy and light.

Cale realized that Cassidy Sherridan had just dismissed him.

He wasn’t the type of man to be dismissed.

“Readers are barely going to have time to catch their breath as the nonstop action and sizzling romance plummets them down, sweeps them up and never levels out.”