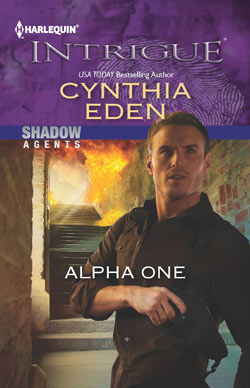 “JULIE’S MISSING. YOU HAVE TO GET HER BACK.”

The minute he got the message, undercover agent Logan Quinn sprang into action. Getting Juliana James out of Mexico alive was the Elite Ops covert agent’s only priority. But once the senator’s daughter was safely back in their Mississippi hometown, Logan had a new mission: to get another chance with the woman he couldn’t lose again.

Juliana had never forgotten the day, ten years ago, when Logan left her heart in pieces. Now he was back in her life, sworn to protect her from the ruthless weapons dealer who wanted her dead. As passion blindsided her–and she was once again thrust into danger–Julie realized how much she’d risk for one more day in Logan’s arms.

(Excerpt from ALPHA ONE by Cynthia Eden. © Reprinted by permission. All rights reserved.)

“You don’t deserve to die here.”

Juliana James looked up at the sound of the quiet voice. She couldn’t move her body much because she was still tied hand and foot to the chair in the dimly lit room. Tied with rough ropes that bit into her skin. Though she’d struggled for hours, she hadn’t been able to break free.

She’d done nothing but slice open her flesh on the ropes.

“If you tell them…what they want to know…” He sighed. “They might let you go.”

Juliana swallowed and felt as if she were choking back shards of glass. How long had it been since they’d given her anything to drink? After swallowing a few more times, she managed, “I don’t know anything.” She was just trapped in a nightmare. One day, she’d been soaking up the sun on a Mexican beach, and the next—

It was a nightmare all right, and she desperately wanted to wake up from it. Ready to wake up—now.

John Gonzales, the man who’d been held captive with her for—what was it now? Three? Four days?—was slumped in his chair. She’d never met John until they were thrown together in this hell. They’d both been kidnapped from separate areas in Mexico. The men who’d abducted them kept coming and getting John, taking him.

And she knew her time was coming.

“I’m not…perfect,” John’s ragged voice whispered to her. “But you…you didn’t do anything wrong… It was all your father.”

Her father. The not-so-honorable Senator Aaron James. She might not know who had taken her, but once her abductors had started asking their questions, Juliana had figured out fast that the abduction was payback for something the senator had done.

Daddy hadn’t raised a fool. Just, apparently, someone to die in his place.

Would he even care when he learned about what had happened to her? Or would he just hold a press conference and look appropriately saddened and grievous in front of all the cameras? She didn’t know, and that fact made her stomach knot even more.

Juliana exhaled slowly. “Perfect or not…” She didn’t know the things that John had done. Right then, they didn’t matter. He’d talked to her when she’d been trapped in the dark. He’d kept her sane during all of those long, terrible hours. “We’re both going to make it out of here.”

His rough laughter called her words a lie.

She’d only seen his face a few times, when the light was bright enough in the early mornings. Appearing a bit younger than her own thirty years, John had the dark good looks that had probably gotten him plenty of female attention since he was a teen.

“Do you have any…regrets?” John asked her. She saw his head tilt toward her as he waited for her response.

Juliana blinked against the tears that wanted to fill her eyes. Regrets? “A few.” One.

A pause. Then “You ever been in love, Juliana?”

“Once—” and in the dark, with only death waiting for her, she could admit this painful truth “—but Logan didn’t love me back.” Pity, because she’d never been able to—

The hinges on the door groaned as it opened. Juliana tensed, her whole body going tight with fear. John was already swearing, jerking against his binds, but.

But the men weren’t coming for him this time.

They were coming for her.

Logan Quinn felt a trickle of sweat slide down his back. He didn’t move, not so much as a muscle twitch. He’d been in position for the past forty-three minutes, waiting for the go-ahead to move.

To storm that building and get Julie out of there.

Not that she was his baby. Not anymore. But the minute Senator James had contacted him, asking for his help and the help of his team, Logan had known that trouble, serious trouble, had come to hunt him down.

Julie’s missing. You have to get her back.

That was all it had taken. Two sentences, and Logan had set his team up for a recovery mission in Mexico. His unit, part of the Elite Operations Division, didn’t take on just any case.

But for her, he’d do anything.

“There’s movement.” The words whispered into his ear via the comm link that all members of his recovery team used.

“I have a visual on the target.”

His heart raced faster. This was what they’d been waiting for. Movement and, hopefully…visual confirmation. They wouldn’t storm the place, not until—

“I see her. The girl’s being led down a hallway. There’s a knife at her throat.”

Logan held his position even as fury pulsed within him. Juliana would be scared. Terrified. This was so far from the debutante balls in Mississippi that she knew. So far from the safe life she’d always wanted to lead.

He’d get her back to that life, then he’d walk away. Just as he had before.

“South side,” that same voice whispered in his ear. Male. Gunner Ortez, the SEAL sniper Uncle Sam had recruited for their black-ops division. A division most said didn’t exist.

Finally, Logan moved. A shadow in the night, he didn’t make a single sound as he slipped into the building. To his right, Jasper Adams moved in perfect sync with him. The Ranger knew how to keep quiet just like Logan did. After all their training, stealth was second nature to them now.

Logan came up on the first guard, caught the scent of cigarettes and alcohol. One quick jab, and the guard’s body slumped back against him. He pulled the guy into the shadows, dropped him in the corner and signaled for Jasper to keep moving.

Then he heard her scream.

The blood in Logan’s body iced over. For a second, his vision seemed to go dark. Pain, fear—he could hear them both in Juliana’s scream. He rushed forward, edging fast on Jasper’s heels. Jasper knocked out the next guard, barely pausing.

Logan didn’t pause at all. He drew out his gun and—”Please, I don’t know!” It was Juliana’s desperate voice. The voice he still heard in his dreams. Not soft with the South now, but high with terror.

They passed the first door. The second was just steps away. Hold on, hold on…

“Company!” Gunner’s terse warning blasted in his comm link. They barely had time to duck for cover before the rat-a-tat of gunfire smashed into the wall above them.

Made. Logan fired back, once, twice, aiming with near-instant precision. He heard a choked cry, then the thud of bodies as two men hit the ground. Jasper covered him, moving quickly, as Logan kicked open lucky door number two. With that gunfire, the men inside would either flee…

Or try to kill their prey.

But as Logan burst into the room, three men turned toward him. He fired at the guy on the left as the man drew his gun. The guy’s body hit the floor. Then Logan drove his fist into the face of the attacker on the right. But the one in the middle…the one with his knife pressed against Juliana’s throat.

Logan didn’t touch him. Not yet.

“Vuelva o ella es muerta,” the guy snarled back at him. Step back or she’s dead.

Logan didn’t step back. He’d never been the type to retreat. His gaze darted to Juliana. She stared at him, eyes wide, body frozen. A black ski mask covered his head, so he knew she had no idea who he was. But Logan knew she’d always had a real fine grasp of the Spanish language. She understood exactly what the man had said to him.

“Step back.” Her lips moved almost soundlessly. “Please.” Then she repeated her plea in Spanish.

Still, he didn’t move. Beneath the ski mask, his jaw locked. He kept his gun up and aimed right at her attacker’s head. One shot.

Instead of backing up, Logan stepped forward. Juliana screamed—and then she started fighting. Her nails clawed at her captor’s hand, and she drew blood of her own. The guy swore and yanked back on her hair, but that move lifted the knife off her throat. Lifted it off just enough for Logan to attack.

He caught the man’s wrist, wrenched it back. Even as Logan yanked Juliana forward, he drove the guy’s wrist—and the knife—right back at the bastard’s own throat.

When the body hit the floor, Logan didn’t glance down. He pulled Juliana closer to him and tried to keep her attention off the dead men on the floor. “It’s all right,” he told her, attempting to sound soothing in the middle of hell. More gunfire echoed outside the small room. The sound was like the explosion of fireworks. The voice in his ear told him that two more men had just been taken out by Jasper. Good. The guy was clearing the way for their escape. Logan’s hands tightened on Juliana, and he said, “I’m gonna—”

She kneed him in the groin.

Logan was so caught off guard by the move that he let her go. She lunged away from him, yelling for all that she was worth.

“Damn it,” he growled and hissed out a breath, “I’m not here to hurt you!”

She’d yanked the knife out of the dead man’s throat.

She came up with it clutched tightly in her white-knuckled grip. “You stay away from me!”