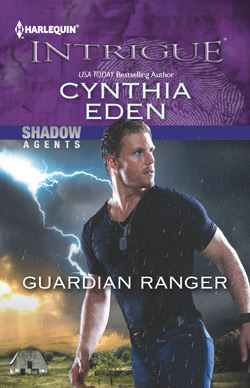 The Last Chance bar was Veronica Lane’s last hope. Desperate to find her missing brother, the sheltered computer programmer turned to Jasper Adams–the man she’d been warned to stay far away from. Veronica knew she was putting her life into the hands of the former Army Ranger, who aroused desire she had to resist at all costs.

Posing as a ruthless mercenary was a cover for what Jasper was really doing: hunting a killer. And Veronica was in the line of fire. The soldier-turned-elite-ops-agent knew he was playing a dangerous game–trying to win her trust while deceiving her about his true mission. What would happen once Veronica discovered that everything about him was a lie…everything except his passion for her?

Desperation had driven Veronica Lane to the small, run-down bar in the middle of absolute nowhere. That same desperation had her hands shaking and her heart racing as she pushed open the bar’s old wooden doors and risked a cautious step inside Last Chance.

The bar name was rather fitting, but not exactly reassuring.

No band was playing in the bar. It wasn’t that kind of place—no live bands would ever be playing in a joint like this. The interior was dim, and the bar smelled of alcohol and cigarettes. Despite its worn appearance, Last Chance was packed, mostly with men who were drinking and with some ladies who were dancing. Dancing to their own beat because the jukebox wasn’t exactly spitting out any nice tunes.

Veronica felt unwanted eyes on her as she took another slow step inside the building. She knew her mark waited in that bar. She’d worked hard to track the man down. Now Veronica just had to convince him to help her.

I can do this.

The ridiculous high heels that she wore weren’t exactly helping her to navigate or to look as though she knew what the heck she was doing. She’d tried to dress the part in order to fit in, but instead of giving her a sexy confidence, the short skirt she was wearing just made her feel exposed.

Too many eyes. The weight of all those stares was making her way too nervous.

After huffing out a hard breath, Veronica lifted her chin. The bar. She needed to head toward that long, thin, wooden counter with its assortment of stools. Didn’t the bartender always know everything in places like this? He’d better. She dodged and weaved her way around the Last Chance patrons, then grabbed the bar countertop in a white-knuckled grip.

The bartender turned, the faint light gleaming off his bald head. A cowboy hat would cover that baldness.

He lifted a brow. “Want something?”

Now both dark brows were up. Could she have sounded more like an idiot?

“His name’s Jasper,” she added. A name that didn’t sound too dangerous, but the man…oh, yes, he was the most dangerous man she’d ever met. “Jasper Adams, and he’s here.”

The bartender pushed a whiskey glass toward a guy on the right. She saw the black ink of what appeared to be a skull tattoo peeking just beneath the sleeve of his shirt. He grunted, and her gaze jerked back up to meet his. “You sure you want to tangle with him?”

He smiled, and the smile just made his face look even harder. His dark eyes glinted as he said, “Then just follow the sound of fists.”

Then she heard the thud of fists. Unmistakable. A man shouted. Another growled. She even heard some cheers. The bartender pointed toward the back room. “Have fun.”

Veronica sucked in a deep breath and followed the sound of voices and fists.

She had to push her way through the small crowd that had gathered at the back room. No bobbing or weaving this time. She had to push through a line of sweaty bodies. Cowboys who were enjoying one very brutal brawl.

Once she made it through that wall of bodies, Veronica saw what held the crowd so captivated. Two men were circling each other. One was tall, his body strong with muscles, his blond hair bright even in the dim light. The other man was pale, with a wild shot of red hair, black eyes and fists that moved so fast—

The blond male caught those fists in his hands. Just…caught them. Then he smiled. “Try harder next time.” Then the big, blond fellow slammed his head into his opponent’s face.

Veronica winced. She was pretty sure the redhead’s nose had just broken.

The men around her cheered.

“Lady, what the hell?” Someone grabbed her hand and tried to haul her back.

The blond spun to face her, obviously ready for a sneak attack.

She smiled, hoping that she didn’t look like a threat.

His eyes—a dark, deep green that she’d never been able to get out of her mind—narrowed on her. Then that green stare slowly swept over her face. Over her body. She warmed beneath his gaze.

Jasper Adams. Still just as big, bad and dangerous as she remembered.

And just as sexy.

The cowboy’s hand instantly fell away from her.

Jasper didn’t even glance back at the man behind her. His gaze had come back to meet Veronica’s. “I…know you.”

Though he didn’t sound as if he actually remembered how he knew her. So much for making a lasting impression.

Jasper’s gaze fell to the exposed length of her legs. “I’d like to know you even better.”

Her face flushed. Maybe it was a good thing he was looking at her legs. That way, he missed the whole flaming-face bit.

Only his eyes were back on her face now, and he was almost smiling.

Time to take charge of the situation. Or try to. Veronica cleared her throat. “I need to talk with you, Jasper.”

Since the man on the floor was crawling away now and holding his bleeding nose, the group started to thin. Jasper closed in on her. He reached for her hand. “Is that all you want?”

“No,” she barely whispered.

She could tell by the heavy-lidded look in his eyes that Jasper had something more physical in mind. But even though she’d had a crush on him for more years than she wanted to confess, Veronica straightened her spine and said, “What I really want.”

He leaned in close to her. His heady scent—male, soap, the crisp outdoors—swept around her.

“What I really want… ” She eased out a slow breath. “Is your help.”

Judging by the expression on Jasper’s handsome face, that was the last request he’d expected.

Jasper Adams. Ex-Ranger. Lethal killing machine. Heart-breaker. Okay, those were the words whispered about him. She wasn’t sure all of the rumors that she’d heard about him were true, and, right now, she didn’t care.

One thing she did know… ex-ranger was the most important part to her. “I’m Veronica Lane.” She said her name in case he’d forgotten, which he obviously had. “A few years ago, you were in a unit with my brother, Cale.”

His eyelids flickered. Then he was pulling her deeper into the shadows. Pushing her toward a small wooden table that sat against the back of the bar. Privacy. A tiny bit of it, anyway.

“Do you remember him?” Veronica pressed.

Jasper rubbed his chin, studied her and nodded.

Her breath expelled in a relieved rush. “Good. He…he always spoke highly of you.” Spoke. She’d used the past tense. That wasn’t what she’d meant to do. Veronica blinked away the stupid tears that wanted to fill her eyes. “He said that you were one of the best trackers he knew.”

“Is that all he said?” His voice, with the faintest hint of a Texas drawl, rolled over her.

“He said you were deadly. That I should…” This part was embarrassing, but she wouldn’t lie to him, so she finished, “He said that I should stay far away from a man like you.”

Another slow nod. “Sounds about right.” One golden brow rose. The man’s face was almost perfect. Too gorgeous. High cheekbones. Square jaw. Firm lips. A slightly hawkish nose, but it just made his other features look even stronger. And his eyes.

A woman could easily be tempted by eyes like that. Tempted to do just about anything.

The jukebox started to play another tune. A slower song. The dance-with-me kind of song.

“If your brother warned you away, then why are you here, Ms. Veronica Lane?”

“Because I have to be.” She perched on the edge of her chair. The chair’s legs were uneven and wobbled a bit beneath her. “I need your help.”

His fingertips drummed on the scarred tabletop. “And you think I’ll help you because…?”

“Because I can pay you.” She fumbled and opened her purse. “I even brought some cash in with me—”

He swore and grabbed her hands, closing the purse and trapping her fingers beneath his own. His skin was rough, the tips of his fingers and his palms calloused. “Lady, don’t you know better than to flash a wad of cash in a bar like this?”

Her heart raced so fast that her chest hurt. “I’m desperate.”

Very slowly, he released her. “Yes, ma’am,” he drawled, “I am getting that impression.”

“I heard…” Rumors, whispers, some of what she’d picked up from her brother over the years and some that she’d learned on her own. Clearing her throat, she said, “I heard that you would be willing to take on certain jobs if the money was right.” She leaned forward. Her chair teetered. “I can make the money right for you, okay? Please.” She wasn’t above begging. Because I am that desperate. “Say you’ll help me.”

His eyes gave no clue to his thoughts. They were just a cold green shield. “What do you want me to do?” He waited a beat. “You trying to get me to kill someone for you?” His voice was silky soft, deadly.

She shook her head. “No, of course not!”

He just stared back at her. Veronica swallowed the lump in her throat. She realized that the “of course” probably didn’t apply to him. He was ex-military, a man who often sold his lethal skills out to the highest bidder. Dealing out death…maybe that was common for him.

It wasn’t so common for her.

Her fingers clenched around her purse strap. The better to hide the trembling of her hands. “I want you to find someone for me.”

She caught the faintest expression of surprise in his gaze. A very, very fleeting expression. “Who?” Jasper demanded.

“My brother. Cale’s missing.” Missing and, she feared, dead.