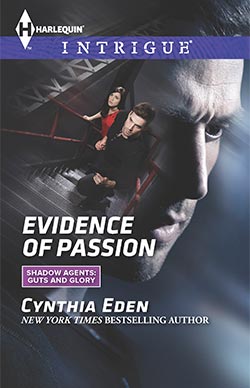 Trusting the wrong man had almost cost EOD agent Rachel Mancini her life. Now, years later, the killer’s back to make the hit he missed. But he won’t succeed while Rachel’s gorgeous partner, Dylan Foxx, is on the case. He’s been the sexy ex-lawyer’s friend for years and will do anything to keep her safe. And though it could prove fatal, he wants her in his arms…and his bed.

But first he has to stop the madman obsessed with Rachel. Ex-SEAL Dylan has the skills and determination to meet every danger the twisted assassin can unleash. A relationship has never had a place in his life…until he senses Rachel wants him as badly as he wants her.

The EOD—the Elite Operations Division—was an off-the-books covert unit that Uncle Sam liked to pretend didn’t exactly exist. The men and women in the EOD were all ex-military. They were lethal, well-trained agents who specialized in hostage rescue and unconventional warfare.

A murder in D.C. shouldn’t necessarily catch their attention.

But this was no ordinary murder. And it was far from a routine case.

Dylan Foxx slipped past the cops who waited in the hallway of the high-rise hotel, a hotel that was situated just a few blocks away from Pennsylvania Avenue. They were on the top floor of the hotel, and the cops had all gathered around suite 706. Dylan’s boss, Bruce Mercer, had made sure he’d get access to this room. Bruce Mercer controlled most of D.C. from behind the scenes. A puppet master, always pulling the strings.

Dylan entered the room and surveyed the area. The murder victim lay sprawled near the bed. His blood had pooled and darkened the lush carpet. One shot to the heart.

Dylan recognized the victim. Hank J. Patterson. Patterson had been a military judge, one of the most respected on the bench.

Patterson spent over fifteen years as an active soldier, but the man hadn’t been able to fight back against his attacker. He lay there, no signs of defensive wounds on him, as the scent of death deepened in the suite.

Dylan heard a sharply indrawn breath behind him, and he turned to see Rachel Mancini staring down at the body. Her blue eyes were wide with horror.

He immediately moved to try and block her view. “What are you doing here?” Dylan demanded as fury and fear twisted within him. Because in Patterson’s blood, Dylan had seen something—something that triggered a long-held rage within him.

Rachel blinked in surprise. Her hair, a dark curtain of silk, brushed against her jaw as she gave a little shake of her head. “I’m following orders. Mercer called and told me to get down here.” She straightened her shoulders. “I’m your teammate, remember?”

As if he could forget. When it came to Rachel, there was never any forgetting for him.

“Where you go,” she added, her gorgeous eyes meeting his, “I follow.”

But he didn’t want her following him into this mess. Rachel could handle danger, he got that, it was just—I don’t want her here. Not on this case. I need her to be safe.

“That’s Hank Patterson,” she said, nodding. “I worked with him back when I was a Judge Advocate.”

Before Rachel had traded her courtroom days for a life of secrecy with the EOD.

That was one of his problems. When it came to Rachel, all of his protective instincts went into overdrive. Actually, most of his primal instincts did. There was just something about her…

Dylan didn’t move. His gaze swept over Rachel’s face. Glass-sharp cheekbones, golden skin, full, plump lips. And her eyes—they could bring a man to his knees.

Beautiful. He’d thought that from the first moment he saw her—even though she’d been terrified at the time. Terrified, but still so brave as she held that gun in her shaking grip.

Rachel was one of the strongest women he’d ever met.

Dylan’s boss at the EOD agreed with that assessment, which was why the guy had brought Rachel into the fold.

But while Mercer only saw her strength, lately, Dylan was seeing more of Rachel’s vulnerability. She could be hurt so easily. Just as she’d been hurt a few months before when one of the EOD’s own agents had turned against them.

Rachel had wound up in the hospital and Dylan—for a few minutes there, he’d lost control. When he’d thought Rachel might die, he’d spiraled into a pit of fear that had left him feeling—

As always, her touch sent an electric shock right through his system.

“Mercer…” His voice came out too gravelly, so Dylan tried again, saying, “Mercer didn’t tell you why we were being called in?”

“Patterson is military,” she said, bringing her body even closer to his. Her scent—the sweet scent reminded him of roses—wrapped around him. “I figured he wanted us to take lead because of—”

“Hank Patterson was executed,” Dylan said, breaking through her words. Of course, leave it to Mercer to force this reveal on Dylan. The next bit of news he had to share would wreck Rachel’s world, he knew it would. And he hated that he had to put her through more pain.

After a brutal attack by a rogue agent, Rachel had only just been cleared to return to work. She’d left one nightmare, and now she was walking straight into another one.

If he had his way, he’d protect Rachel from anything and everything out there—and from one twisted man in particular.

Still frowning at Dylan, Rachel slipped past him. He noticed that she was careful not to touch anything in the suite. After her time prosecuting, Rachel knew better than to contaminate a crime scene.

She knelt next to the body. Her gaze swept over Patterson. Dylan easily read the sorrow on her face. Then her attention locked on Patterson’s wound.

On the blood near him. On what was in that blood.

“That’s a playing card,” Rachel said. Her words shook. Her golden skin had just turned pale. Her head tilted so that she could look up at him, and her eyes were wild with emotion. “Tell me, tell me that it’s not him!”

Because the EOD was well acquainted with one particular assassin who always left a playing card behind. Jack.

Rachel, in particular, was intimately acquainted with the man.

Dylan had gloves on his hands and, carefully, using tweezers, he bent and turned over the playing card so that both he and Rachel could see the face.

The Jack of Hearts stared back up at him.

Rachel surged to her feet. “No.” Her denial was immediate.

Dylan turned to the tech who waited silently just a few feet away. He passed the card to the tech. It was bagged and tagged immediately. That evidence would be going back to the EOD for analysis.

She hurried from the room.

Dylan didn’t follow her, not yet. He stared down at the body then he let his gaze sweep the suite once more. There had been no evidence of a break-in. But that was the way Jack worked. In and out. Fast kills.

And a calling card left behind. The guy always left his card because he liked to claim his kills.

Dylan stayed a few more minutes, needing to be thorough. Crime-scene analysis sure wasn’t his area of expertise, but killing— Well, he’d learned plenty about that during his time as a Navy SEAL and as an EOD agent.

He knew he was looking at the work of a professional killer. The man had used a silencer because no one at the hotel had reported hearing a shot. The maid had received a horrifying surprise when she bustled inside to clean the place that morning.

After giving orders to the tech, Dylan exited the room. He wasn’t particularly surprised to see Rachel pacing in the hotel’s hallway.

When she’d rushed out, he knew that she wouldn’t have gone far. That wasn’t Rachel’s way.

But they didn’t speak until they were in the privacy of the elevator. The doors slid closed and Rachel—

“Why didn’t you tell me?” Pain thickened her voice.

He hated for Rachel to be in pain. His fist struck out, and he hit the button that would stop the elevator. Immediately, they jerked to a halt.

“If you thought he might be back in D.C….why didn’t you tell me?” she demanded again.

Dylan turned toward her. Rachel’s eyes were so wide—she ‘ll bring me to my knees. He locked his jaw and knew he had to stay in control. “I didn’t know he was hunting here again. Patterson’s death—this is the first time any kill in D.C. has been linked to Jack in three years.”

But now that Dylan did know Jack was back…his first instinct was to get Rachel the hell out of that city. He wanted her transferred to someplace safe and sunny while he hunted the maniac known as Jack.

Because Jack will go after her.

“It’s not him, is it?” Rachel asked as she rubbed her arms. “It has to be a copycat, right? I mean, three years ago, his exploits were all over the news. Everyone knows about him now.”

Jack. The man wasn’t a serial killer, at least not in the strict sense of the word. He was an assassin. One who killed for cash.

He was a man with far too much skill when it came to death.

“Tell me that he’s a copycat,” Rachel said.

He wished he could. Dylan took a step closer to her. He wanted to pull Rachel into his arms and hold her, but that wasn’t protocol. He was the team leader. They worked together, side by side. They fought together.

Their relationship was supposed to be professional.

To him, it was so much more.

“I can’t tell you that. At this point, I don’t know who we’re dealing with.”