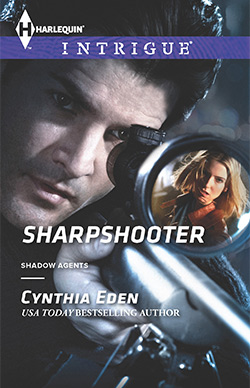 Heart-pounding action meets smoldering desire in USA TODAY bestselling author Cynthia Eden’s Shadow Agents miniseries!
Two years ago Gunner Ortez saved Sydney Sloan’s life on a mission gone wrong. And ever since then, he’s been watching her back. Now a hostage-rescue mission is about to blow the Elite Ops agents’ lives apart once again.

Working side by side back in the jungles of Peru, the heat between Sydney and Gunner is hotter than ever-and so are the threats to their lives. With the danger escalating, Sydney knows Gunner is her only hope at successfully completing their assignment. But the ex-SEAL who arouses passion she’d only dreamed about also poses the greatest risk to the secret she carries in her heart…

Please note: The print version of SHARPSHOOTER will be available on 7/23/13, and the digital version will be released on 8/1/13. The release dates for this book are determined by my publisher, Harlequin Intrigue.

(Excerpt from SHARPSHOOTER by Cynthia Eden. © Reprinted by permission. All rights reserved.)

The kidnapper had a gun pressed to Sydney’s head.

And the green eyes that stared straight back at him. Seeming to know where he was. Her green gaze that showed no fear even as that soon-to-be-dead man jammed the gun harder into her temple.

“Do you have the shot?” a low voice asked in his ear. The earpiece wouldn’t even be noticed by most people. Uncle Sam was great at inventing gear that his soldiers could use anytime, anyplace.

With a minimum of fuss and a maximum of damage.

Gunner’s finger was curled over the trigger, but he wasn’t taking the shot. “Negative, Alpha One,” he told his team leader. “Sydney isn’t clear.”

And he was sweating, feeling a tendril of fear—when he never felt fear. There was no room for emotion on any of their missions.

He worked with a group far off the grid. The Elite Ops Division wasn’t on any books anywhere in the U.S. government. They took the jobs that the rest of the world wasn’t meant to know about. In particular, his EOD team—code-named the Shadow Agents—had a reputation for deadly accuracy when it came to taking out their targets.

And this guy…that jerk with the trembling finger, he was going down. The man had kidnapped an ambassador’s daughter. Held her for ransom, and when the ransom had been paid, he’d still killed her.

He’d thought he could hide from justice.

Sydney’s intel had led them to Jonathan Hall. Led them to his hideout just over the border in Mexico.

Sydney had volunteered to go in, to make sure that Hall was holding no civilians.

Now she was the one being held.

“He can’t leave the scene,” Logan Quinn said, the faint drawl of the South sliding beneath the team leader’s words as they carried easily over the transmitter. “You know our orders.”

Containment or death. Yeah, Gunner knew the drill, because the ambassador’s daughter hadn’t been the first victim. Hall liked to kill.

Gunner stared down at the man, at Sydney. You won’t kill her.

Sydney’s face was emotionless. Like a pale canvas, waiting for life. That wasn’t her. She was always brimming with emotion, letting it spill over onto everything and everyone.

It was only on the missions that she changed.

How many more missions would she take? She seemed to be putting herself at risk more these days. He hated that.

He shifted his position, testing the wind. Hall wouldn’t see him. He was too far away. Gunner’s specialty was attacking from a distance.

There was no target that he couldn’t reach.

He could take out that man right now. A perfect shot…if he hadn’t been worried that Hall’s finger would jerk on that trigger at impact.

“I want the gun away from her head,” Gunner snapped into his mouthpiece.

But even as he said the words, he saw Sydney’s lips moving.

Hall was outside the small house, his gaze frantically searching the area even as he kept Sydney killing-close. The man wasn’t stupid. He’d eluded capture for over a year because he understood how the game was played.

Hall knew Sydney hadn’t come in alone. The guy just didn’t see her backup. When he hunted like this, Gunner’s prey never saw him, not unless he wanted to be seen.

This time, he wanted to be seen because that gun was coming away from Sydney’s head.

He shook his head, even though he realized she’d never see the movement. Then he took two steps to the right. He knew that, in this particular position, the sunlight would glint off his weapon. When he saw that flash of light, Hall would fire—

And he did. The man yanked the gun away from Sydney’s head and shot at Gunner. Too late.

Gunner had already taken his own shot.

Before she even hit the ground, Gunner’s bullet slammed into Hall. The man stumbled back and fell.

The other EOD team members rushed from the shadows. Not that they needed to rush. Hall wasn’t going to be a threat to anyone, not anymore.

Gunner’s breath eased out. He watched as Sydney pushed to her knees, then rose to her feet.

He’d put the weapon down, so he couldn’t see her face clearly, not with the distance that separated them. But he was aware that his heart beat too fast. His hands had been sweating.

But whenever he was close to Sydney, all he could do was feel.

He packed up his weapon and hurried down to her. Because lately, it was always about her.

Day and night. Whether he was awake or asleep, he was obsessed with the woman.

Cale and Logan had secured the scene by the time he got down to the front of the house, and Cale was leading some sobbing redhead from the cabin. So Sydney had been right. Hall had already taken his next victim. If they hadn’t moved then, would she have been dead by nightfall?

Gunner’s body tensed. He knew he should hold on to his control, but… the gun had been at her temple. If Hall hadn’t hesitated, Gunner would have watched while the man put a hole in her head.

So he ignored the wide stare that Logan gave him and stalked to Sydney. He grabbed her wrist, pulled her against him. “You took too much of a risk.”

Her short blond hair shone in the light. Her cheeks stained red—he didn’t know if that red was from fury or embarrassment.

“I did my job,” Sydney said through gritted teeth, lifting her chin. “I told you that my intel indicated a new hostage. She was hidden in the closet. If I hadn’t moved in—”

He pulled her even closer. “He could have killed you.” Then what would I have done?

Her voice dropped. “You say it like that matters to you.” Her words were whispered, carrying only to his ears.

Damn it, she did matter. “Sydney.”

“You’re the one who wants to be hands-off,” she snapped with a hard flash of her green eyes. “So why are you holding on to me so tightly?”

He was. Too tightly. He dropped her wrist as if he’d been burned.

“I’m not waiting any longer,” Sydney told him as she straightened her shoulders. “Death can come at any moment, and I told you once…I’m not crawling into the grave with Slade.”

Yes, she’d told him that, when he’d made the mistake of getting too close to Sydney on their last case. They’d been trapped during a storm, forced together in a small cabin, and all he’d been able to think was.

But he’d—barely—managed to stop himself from taking what he wanted. He did have some self-control. Unfortunately, with her, that self-control was growing weaker every day.

“I’m going to start living my life on my terms,” Sydney told him. “Consider yourself warned.”

Then she spun away. Sydney headed toward Cale and the redhead. More backup had swarmed the scene. Other EOD agents who’d come to lend their support for the rescue-and-takedown operation.

Then Logan cleared his throat. “I’ve seen that look before.”

Gunner glared at him. Logan might be the team leader for the Shadow Agents, and Gunner considered him as a friend most days, but the man should know not to—

“Better watch yourself, or you might just lose something important.”

She was never mine to lose.