Saturday Snippet: Opening… Back to Blog

Today’s snippet focuses on the opening of a book. So, for your reading fun, I’ve posted the first few paragraphs from MIDNIGHT’S MASTER. Hope you enjoy the excerpt!

Having a breakdown in the middle of a live broadcast was really not a very good thing for a reporter’s career.

Holly Storm’s fingers tightened their already white-knuckled grip around the microphone.  Her breath came, too hard and way too fast, as she fought to hold onto her control.

“Holly…”  The reed-thin voice of her producer.

Shit.  Her career was about to hit the toilet.  She dragged her gaze away from the body—away from the body that she knew didn’t belong to a human, and glanced back toward the round lens of the camera.  “Uh…I’m…H-Holly Storm, reporting to you live from the scene of—” A freaking slaughter. “A brutal…murder.”  Yeah, brutal was a good word choice considering the way the poor guy had been sliced to ribbons.

Get a grip, girl.  She couldn’t afford a meltdown right now.

After a hard swallow, she finally managed to suck in a full breath.  Holly cleared her throat, then spoke in that calm, cool voice she’d perfected back in her college communication classes so long ago. “Police aren’t talking…”  At least not to her.  But then, the two detectives on the scene—Colin Gyth and Todd Brooks—weren’t exactly on her “friends” list.

“But this reporter can’t help but wonder just what sort of monster is loose on our Atlanta streets.” 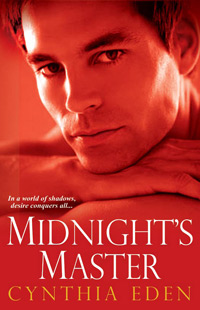 And if you’d like to read more openings, check out these participating authors:

Have a great Saturday!

This entry was posted on Saturday, July 25th, 2009 at 6:00 am and is filed under Romance. You can follow any comments to this entry through the RSS feed. Both comments and pings are currently closed.