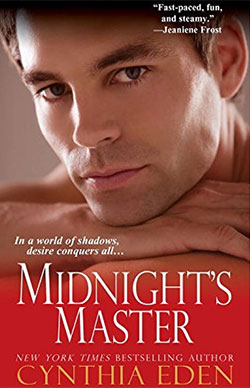 In a world of shadows, desire conquers all…

In this sexy, gripping novel, Cynthia Eden draws readers deeper into the realm of the Others—vampires, shifters, and sinfully attractive demons whose powers are matched only by their dark hungers…

Tall, dark, and formidable, Niol Lapen is the last demon on earth most people would ask for a favor, yet the sexy little reporter who wanders into his club dares to do exactly that. Holly Storm already knows too much about his kind, and Niol has no wish to help her get in deeper over her head. But working alongside her may be the only way to stop a killer, even as it ignites a primal desire unlike anything he’s known.

Holly has seen firsthand what Niol is capable of, but that doesn’t frighten her nearly as much as her body’s instinctive reaction to him, or the wild, fierce passion that would tempt her to follow him through hell itself. Something evil and relentless is prowling the streets of Atlanta. And as Holly’s search leads her into danger that even Niol could never have predicted, she’ll uncover a secret that could rip her world apart….

“No.  I’m not one of your demon wannabe sluts, Niol.  I don’t want to jump you in the dark so that I can have the thrill of saying I screwed a monster.”

Hit.  The reporter obviously understood more than she’d pretended about the human women who came to his bar.

“Yes, Holly, you do.”  Her heart still pounded too fast, her nipples were still pebbled, and her cheeks were flushed—all from hunger.

“I’m not going to play.”  Her hand dropped. “I’m going to do my job—and find out what happened to Carl.  With, or without your help.”

He turned around and walked away from her.   As he stalked toward the SUV, he felt her eyes on him.  His hand lifted, reached for the door.

Oh, but the woman’s voice could get to him.  It was the soft huskiness when she said his name.  Like a stroke right over his groin.  But he didn’t look at her.  Niol opened the door.

The laughter escaped then.  He just couldn’t help it.  He stepped back and glanced over at her.  “Have you forgotten so soon, sweet?  The incubus who took you that night—he was one of my kind, too—and I burned him,” the fire had been so beautiful, “from the inside out.”

His lips were twisted in a smile that he knew could chill.  “I kill my kind.” The incubus hadn’t been the first, and he wouldn’t be the last.  “I don’t go out on a damn crusade to save them…or any humans who are dumb enough to get involved in a world they can’t understand.”

So he’d been told.

“The heat that Holly and Niol generate warms the chill from a truly gruesome organ-stealing murderer. Readers will cheer at their unlikely attraction, but the twist in the plot is what really makes Eden’s latest unforgettable. ”  —RT Book Reviews, 4 Stars

“The Midnight Trilogy has reached its third book, and the action only gets more perilous while heightened passions between the hero and heroine continue to rise with each new scene. Cynthia Eden has compiled a marvelous cast of characters whose fascinating lives will draw you into every captivatingly revealing detail.” –Amelia of Sensual, 5 Stars

“When a book starts out so good that you almost miss your morning commute, you know you’re in for a great reading experience!  I started Cynthia Eden’s Midnight’s Master and didn’t want to put it down. Ms. Eden has such a smooth writing style you quickly become enmeshed within her characters’ worlds, forgetting the outside.”  –Victoria of Two Lips Reviews, 5 Lips

Hotter After Midnight
Book One in the Midnight Trilogy