DEADLY LIES Prologue Back to Blog

Posted in Romance on February 17th, 2011 by Cynthia Eden

In just a few days (on February 22!), DEADLY LIES will be shipping from your favorite online book retailer or available in your local bookstore. (The e-version of the book will be available on the *official* release date of 3/1.)  So to get ready for the coming release, I thought I’d share the DEADLY LIES prologue with you. And,  yes, warning! There is adult language in this prologue.

Jeremy Briar jerked in the chair, but there was nowhere for him to go. His hands were bound to the armrests, the duct tape was far too tight, cutting into his wrists, and his legs were taped to the legs of the chair.  A blindfold covered his eyes, casting him in darkness, and the scent of cigarettes burned his nose.

“L-let me go…” His voice rasped out. They hadn’t given him anything to drink or to eat, in Christ, how many hours?  “M-my family…th-they’ll pay any-anything…” Just to get me back.

Laughter. Dark and mean.  “No, they won’t pay a fucking dime.”

The ice in his chest froze his heart. “No!” The tape bit into him. “M-my father is—”

“An idiot.” The voice was still low, drifting through the darkness.  “I gave him instructions, but the thing is, Jeremy boy, the asshole just couldn’t follow them.”

“Not like I asked for that much.  Just four million for you. Four damn million.” The shuffle of footsteps.  More than one set. Someone else was here. Wherever the hell here was.  He didn’t know. The last thing he remembered was drinking at The Court, then he’d woken up in hell.

“The bastard has that much in change.”  Anger simmered in that tense whisper.

Jeremy licked his lips and knew that the voice was right. His father owned half the city. He had that much money in the bank, easy.  What the fuck? Jeremy’s mouth was so dry. He’d screamed and he’d screamed before, but no one had come for him.

No one had helped him.

“Your father thinks it’s a joke.”  Jeremy jerked when he felt a touch on his shoulder.  Sharp. Light. Fingernail?

The point pressed into his flesh.

Jesus. A knife. A whimper broke from his lips. “L-Let me talk to him…I’ll make him see—”

“I told him what to do,” the whisper blew against his ear, and Jeremy shuddered. “Told him when to make the drop.  Told him where to put the money. Told him everything, and if he’d just followed my instructions, you would’ve been home by now.”

The blade sliced into his shoulder.

“Rich boy, is this the first time you’ve begged?”

His head jerked in a nod.  He knew tears streamed from beneath the blindfold. He couldn’t stop them.  Fear ate at his gut, and he knew, he knew that his father had left him to die.

Always disappointing me, boy. Not going to dig your ass out of another mess.  You’re on your own.

Those had been the last words that his father spoke to him. So he’d screwed up and gotten busted with pot.  Did he deserve this?

“Beg some more.” The blade sank into his shoulder.

And Jeremy begged. Begged and pleaded and promised anything because he wanted the fire in his shoulder to ease. He wanted the pain to stop.  He wanted to go home.

The knife pulled from his flesh with a thick slush of sound.  Jeremy cried out, sagging back, but the blade followed him.  The tip grazed over his jaw, traveled up his cheek, and then slipped right under the edge of the blindfold.

“You’re going to send your old man a message for me.”

Hope shot through him.  Yes, yes! If he could just talk to his dad, he could make him understand. Not a joke. Hell, no. His dad would understand. The bastards would get their money, and Jeremy would be free. “I’ll tell him anything, I’ll say—”

The blade sliced the blindfold away.

He blinked against the flood of light.  So bright.

“You don’t have to say a damn thing.”

The voice, not a whisper anymore, stopped his heart.

The man crouched over him with the weapon. Jeremy could see the others, too, as they came forward into the light.

The knife sank into his upper arm. It sliced down, and the bastard jerked the blade, cutting through flesh and muscle in one long stroke as he opened the arm from shoulder to wrist.

“Let’s send him a message.” The figure moved around him and stared down with a smile that twisted his lips and never touched his eyes.  “Let’s see what the asshole has to say when he finds what’s left of you.” 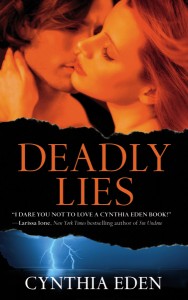 This entry was posted on Thursday, February 17th, 2011 at 9:14 am and is filed under Romance. You can follow any comments to this entry through the RSS feed. Both comments and pings are currently closed.