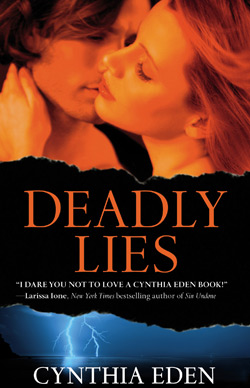 She wants to hide the past…

FBI Special Agent Samantha Kennedy is haunted by memories of the serial killer who abducted her. To keep the darkness at bay, she pretends to be a different, more confident woman. This Samantha doesn’t fear every unknown face. So she throws caution to the wind and shares a night of unbridled passion with a handsome stranger.

He needs to uncover the truth…

One night isn’t enough for successful entrepreneur Max Ridgeway. He wants more of the sexy, smart, mysterious woman who slipped away before dawn. When they meet again, their attraction is undeniable—until his stepbrother goes missing, and Max realizes that Samantha isn’t who she seems. But they must trust each other to trap a ring of blood-thirsty kidnappers before the nightmares that terrorize Sam become irrevocably real.

As a merciless criminal spins a web of . . .

Sam wasn’t normally the type for casual sex. She was the kind of woman who went for commitment, romance, and candlelight.

No, she had been that kind of woman. Now she was different, and she needed. Needed to forget who she was and just feel.

Can’t work the cases. Can’t sleep at night. Can’t even close my eyes without remembering…

Right then, she’d do just about anything to forget.

Sam had left the crime scene hours before. When she’d gotten back to her place, the invitation to this expensive party had been waiting on her porch, courtesy of her meddling mother. The woman thought Sam might find a potential mate at one of these boring society gigs.

Sam didn’t want a mate. She just wanted a screw. Hot sex. Hard and wild. And she knew the perfect man to give her everything she needed.

Her perfect man stood across the room from her, separated by the crush of bodies. The party was too hot and too noisy by far with the fake laughter and high voices and the people who were pretending to be interested in each other.

Pretending. She was so sick of pretending.

Sam snagged a drink off a waiter’s tray. She downed the champagne in two gulps and pushed her way toward her target.

He’d know who she was. Sam didn’t doubt that. Well, he’d better know.

They’d had sex two weeks ago. Sex that had left her sore and aching and satisfied. Satisfied—for a time.

She really hoped that the man remembered her.

She sure remembered him.

The man who’d turned her on to casual sex.

Max was lover number three in her lifetime, not that he knew that. She’d been sure to play the game. After all, she could pretend too. She’d acted cool and confident and made sure that she didn’t screw things up.

“You.” His voice, deep and rumbling, caught her, and she looked up to see him striding toward her.

Game face, girl. Get it on. Sam lifted her chin and let her lips curl into a smile that was as fake as all the others in the room. Forget. Forget everything but him.

Why try to pick up someone else when he was there? He’d be all she needed. He’d be…

Hot enough to banish the chill from her body.

Max caught her wrist and pulled her close. All around them, men stood in their perfect tuxedos and women smiled in their designer dresses. A high-end party. One packed with people who had too much money and too much alcohol.

His face—really not handsome, but sexy, so sexy—leaned in close to hers. At six foot three, Max was big and muscled with skin tanned a light brown. His midnight black hair curled just a little too long over the back of his collar.

The first time she’d seen him, she’d known that he would be the one for her. She’d gone into the bar, taken one look, and picked the strongest man in the place.

“You left without a damn word.”

Huh. Anger hummed in his words. She wet the lips that she’d carefully painted for tonight. Part of the mask. Normally, she didn’t care at all about makeup.

She’d come to this party for one reason. Him. She wanted more.

“I’m here now.” She rose onto her toes and whispered the words close to his mouth.

A muscle flexed in his jaw. “Baby, your timing is shit.”

Fresh Fiction: “Cynthia Eden’s character development is extraordinary, taking her serial killers to a whole new level. Don’t miss this fast-paced thriller in the third book of her Deadly series.”

Publishers Weekly: “The heart-pounding sequel to Deadly Fear and Deadly Heat offers surprise and sexy romance at every turn. Still traumatized by a near-fatal encounter with a serial killer, FBI special agent Samantha Kennedy fights to prove herself by tracking a kidnapper who is targeting the sons of wealthy men. She’s also navigating an attraction to business owner Max Ridgeway. When Max’s stepbrother disappears, he and Samantha must race against time and the ever-changing whims of a brutal killer while confronting their troubled pasts and their shared passion. Eden’s characters are complex and likable, and her plot speeds along breathlessly to a surprising and sizzling conclusion. (Mar.)”

Bookpage: “…sexual chemistry is fiery, their conflict strong and the plot turns twisted. Readers will race through the final pages to see if the characters—and love—can survive.”

The Romance Studio:  “There is no way to adequately tell how intense this book is. Explosive action from well rounded characters held my interest until the very end.”  5 hearts