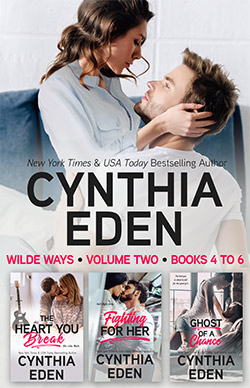 Romantic, fun, sexy, and, of course…dangerous. Welcome to the world of “Wilde Ways” romance. This box set includes one fierce rock-and-roll rocker with an undercover bodyguard, a hot take on beauty and her bad boy beast, and a drop-dead gorgeous anti-hero who will use his lethal skills to protect the woman who owns his heart. Buckle up and enjoy—it’s time for things to get Wilde. Books in this set: THE HEART YOU BREAK, FIGHTING FOR HER, and GHOST OF A CHANCE.

Security agent Julia Slate is going undercover. Her assignment? Protect rocker Bran Copper. He’s sexy, has a reputation for living life to the extreme, and he’s also the target of one very obsessed fan. Julia’s job is to keep Bran safe…and the catch? Bran can’t know that she’s his bodyguard. Bran’s manager has hired her because the star refuses to get protection. Bran just wants to be left alone. With his stalker escalating, that isn’t an option so Julia pretends to be Bran’s new assistant as she moves into his mountain home.

Bran’s new assistant is gorgeous, smart, and…making him crazy. He’s used to women throwing themselves at him, used to people not caring about who he is—just that he’s famous. But Julia isn’t like that. She touches something inside of him, she makes him want, makes him crave everything that he’s never had. Soon Bran can’t imagine ever letting her go. He needs her, he wants her, and what Bran wants…he gets.

FIGHTING FOR HER (Wilde Ways, Book 5)

Rick Williams is big, bad, and not someone you want to have as an enemy. As part of the elite Wilde protection team, his job is to kick butt and take names. Protecting and defending—that’s part of his package deal, but his cases don’t usually involve him protecting someone like her.

Kathleen O’Shaughnessy is the daughter of an infamous mob boss. Her father made sure that she was locked away from the world so Kat didn’t exactly have easy street growing up. Now that her father is dead, she’s suddenly out on her own—and she’s the target of every enemy that her father made in his very long career.

The government wants to use Kat as a witness to take down what’s left of her father’s organization. To do that, though, Kat has to stay alive. She’s not big into the whole witness protection scene. Boring guys in cheap suits aren’t her thing. Kat needs protection that’s a bit…Wilder. Good thing Rick is up for the challenge. One look at Kat, and her protection—and her pleasure—are at the top of his to-do list.

It was the hottest hookup of her life. When Tess Barrett spent the night in the arms of the too sexy to be real stranger, she knew she was walking on the wild side. Sex with James Smith was the best EVER. How was she supposed to walk away from that? From him? So…she didn’t. They planned secret dates. More body-melting hookups.

James can’t keep his hands off his sexy little doctor. She’s buttoned down for everyone else but goes absolutely wild for him. Sure, she doesn’t know his history. Doesn’t know that the man she lets touch every inch of her body used to spend his days working for Uncle Sam and doing some seriously dirty deeds. What she doesn’t know can’t hurt her, right? But then…something happens. Danger sneaks up on Tess. She needs help—a very particular expertise and protective skill set. She needs someone lethal and strong…and James is just the man for the job. After all, lethal is his middle name.