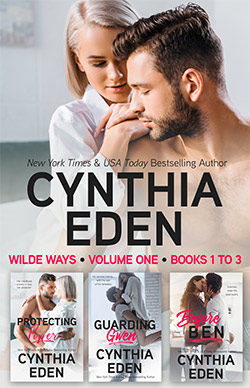 Are you ready to get Wilde? Enemies-to-lovers, second chance romance, and a hot opposites-attract tale…you’ll find everything you want in these three best-selling “Wilde Ways” romance novels. The set includes the three full-length, stand-alone romances: PROTECTING PIPER, GUARDING GWEN, and BEFORE BEN.

Eric Wilde has always known that Piper Lane isn’t for him. She is his younger brother’s best friend…and probably more. But that hasn’t stopped Eric from wanting her, from longing for the one woman that he can’t have. Sure, he’s rich, successful—he’s built a security empire, and he’s got the world at his feet. Only he doesn’t have her.

Free-spirited Piper Lane has always considered Eric to be the enemy. He’s seemed to resent her, and the guy just flat-out makes her nervous. Every time she’s around him, she winds up doing something horribly embarrassing. But, this time…everything has changed. This time, he’s the one man she needs the most.

A stranger has broken into Piper’s home twice, and she feels like someone is following her. Watching her every move. She needs a professional to help her—so enter Eric Wilde. He promises her protection, he promises to put his best investigators on her case, and he even moves her into his house. Suddenly, the guy who has always been the villain in her life…he’s now playing the role of hero.

Gwenevere Solomon is the current “It” girl in Hollywood. The star of a dozen films, she seemingly has the world at her feet. Gwen’s problem? She also has one very dangerous stalker at her door. His attacks are getting bolder, and Gwen is becoming more and more afraid. Because this stalker…he knows secrets that she’s fought hard to keep buried.

Gwen needs protection, and she needs that protection now. So enter her new leading man…Simon Forrest. Tall, dark, and ever-so deadly, Simon is the lover she left behind. Or rather, the lover who left her behind. He went off and became a SEAL, saving the world and riding one adrenaline high after the other. But he’s back now, and as part of Wilde’s elite security team, he’s supposed to offer the best, most discreet protection service in the business. He’ll pretend to be her lover so the press won’t realize her life is going to hell, and Simon will stop her stalker.

But Simon never got over Gwen, and the fact that she’s been filling the big screen with her gorgeous self? Yeah, it’s just made her even more tempting…and put her even further out of his reach. Simon was never good enough for Gwen, and he knew it. This time, he can help her. He can catch the stalker, unmask the jerk, and keep Gwen shining in her spotlight. Easy as pie. Or, it should be…

It was a one night stand with her worst enemy. Ben Wilde was cocky, charming, and sexy as the best sin. He was also Courtney McKenna’s weakness. Every single inch of his muscled perfection was trouble and temptation. They’d sparred in the courtroom more times than she could count, and the tension between them had always been red-hot. One night should have been all she needed to get the guy out of her head and her dreams. Only…it wasn’t.

Ben Wilde has never believed that opposites attract, but there is something about button-downed, prim and proper Courtney that has always driven him wild. And when he gets her in his bed, the attraction he feels for her changes into a sensual obsession. Sure, they can be enemies in the courtroom, but in the bedroom, they are meant to be something else entirely.