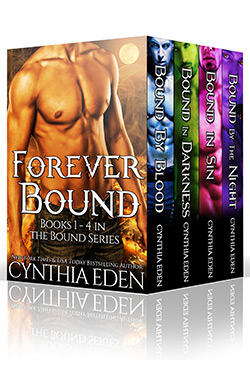 The anthology contains over 90,000 words.

Vampires and werewolves have been blood enemies for centuries, but now a new threat is rising…demons are escaping from hell and those demons are intent on wiping out both the vamps and the werewolves.

In order to stop the demons, pureblood vampire princess Morgan LaBeaux agrees to the treaty offered by werewolf alpha Jace Vaughn. She’ll mate with him, share her blood with him…and in return, the wolves will aid the vampires in this battle.

But Morgan doesn’t realize just how dangerous the wolves can truly be. Jace has been waiting years to claim her. He’s set a trap for his princess, and now that he has her, Jace doesn’t plan to let her go.  He’ll send the demons back to hell, and he’ll keep his vampiress—forever.

When it comes to killing vampires, werewolf Cade Thain is the best slayer in the Northwest. So when a witch hires him to take out a pureblood vamp, the assassin thinks it will be just business as usual. One less vicious vamp on the streets…one more undead parasite gone from the earth. Then he meets her.

Allison Gray isn’t the prey that Cade expects. Beautiful, innocent, she stirs a dark desire within him. Allison hasn’t transformed fully into a vampire, not yet, and it’s Cade’s job to make sure that she never does. Allison thinks that he’s at her side to keep her safe, but Cade is supposed to pick the right moment—and kill her.

Killing Allison is soon the last thing that Cade plans. As she begins the transformation that will turn her into a vampire, her bloodlust and their desire merge in an explosion of need that neither can control. But Allison’s enemies are closing in, and the coming battle will take Cade and Allison beyond life, beyond love…and into a deadly darkness that waits to claim them both.

Human Paige Sloan once loved werewolf Drake Wyler more than life, but then that life was taken away from her. Attacked by vampires, Paige was bitten, and, on a cold, dark night, the life she’d known ended. She was reborn as a vampire–a werewolf’s deadliest enemy.

Paige ran from the vampires who attacked her, and she ran away from her lover. She didn’t want Drake to know what she’d become, and she didn’t want to face the fury of his pack. But a girl can only run for so long until the past catches up with her.

When Paige learns that Drake is being targeted for death, she knows that she can’t hide in the shadows any longer. She has to return to him, and she will do anything–anything–in order to make sure that he keeps living. The vampires might have destroyed her chance to live and love Drake, but they won’t take him. Not over her undead body. She’ll slay them all…and maybe, just maybe…she’ll even have the chance to sin–one more time–with the werewolf who’d marked her as his mate.

BOUND BY THE NIGHT

For the last fifteen years, vampire queen Iona has been dead to the world.  Trapped under the power of a brutal curse, she has been helpless.  A prisoner, locked within her own still body. Then alpha werewolf Jamie O’Connell fights his way to her side.  After defeating the guards that surround her, Jamie gives Iona his blood…and she rises.

The world has changed a great deal in the last fifteen years, and Iona has changed, too. Once known as the Blood Queen because of her dark reputation, she now finds herself longing for the blood of only one man…only he isn’t just a man. She wants the blood of her werewolf—Jamie’s blood.  But Iona doesn’t realize that Jamie has been keeping secrets from her. Very dark, dangerous secrets.  And Iona may have traded one curse for another.

Now that he has Iona, Jamie vows to never let her go. He needs his Blood Queen in order to defeat his enemy, he needs her to make his own beast stronger, and…he just needs her.  Jamie has risked his life to claim Iona, and he won’t let anything break their bond. Not time. Not spells. Not even a wild and reckless vampire queen…

Unedited Excerpt from BOUND BY THE NIGHT–Author Cynthia Eden

He was alone with the prey that he’d sought for the last six months.  The instrument of his revenge.

He lifted his right hand, and his claws slashed across his left wrist. Blood welled, dripped.  Clenching his teeth, Jamie put his hand over the woman’s mouth, and he waited.

The seconds ticked by as his heartbeat thundered in his ears.

Jamie lifted his hand.  Blood had smeared over her mouth.  He leaned toward her, and his finger slid under the small crease in her lips. His index finger pushed lightly inside her mouth as he searched for the fangs that should have been there.

Only they weren’t. The woman had perfectly normal, human teeth. No fangs.

He pulled back.  The wound he’d made on his wrist throbbed with a dull ache, but he ignored it. Pain didn’t matter. Never had, to him. Frowning, he put his hand on her chest. Didn’t feel a heartbeat. Despite what humans believed, the hearts of vampires actually did beat.

But her heart was ominously still.

His back teeth ground together. “Maybe you are dead,” he gritted out.

The Blood Queen had been under a spell for the last fifteen years.  A spell, a curse, same damn thing to him.

The blood of a werewolf had put her under—that blood had frozen her body and locked the magic in place.

And the blood of a werewolf was supposed to wake her. Only she wasn’t waking up.

Hell.  So much for his big, secret weapon.  Jamie would just have to find another way to destroy Latham and—

“I’m not…dead,” she said, her voice a husky purr that actually seemed to rollthrough him, “but you…are.” Her hand flew up.  The woman was strong—far stronger than he’d expected—and she grabbed him by the shoulder and yanked him toward her.

Then her mouth, her very sharp teeth, bit into his throat.

Instead of being afraid, Jamie smiled and let the Blood Queen taste him.

Drink up, baby. It’s your funeral. Because with every drop of blood that she took in these first moments, she was just locking herself to him ever more deeply. Bonding them, body to body, blood to blood, until there would be no escape. Not for either of them.

His claws dug into the sheets as he held his body perfectly still.

Revenge would sure be one bloody bitch.