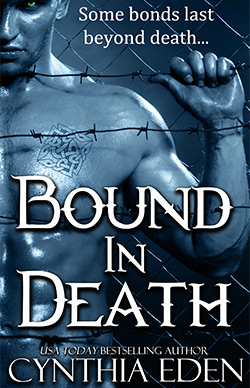 She can’t remember him…

He can never forget her.

For over two hundred years, alpha werewolf Alerac O’Neill has been searching for his mate, Keira McDonough, a woman who was taken from him and imprisoned by a dark vampire master.  He’s hunted for her, endlessly, using vampire blood to extend his life.  He has become a vicious predator, feared by all  the supernaturals.  His hold on reality seems to slip more each day because he is consumed by her.

Only…the woman he discovers in a small Miami bar isn’t the Keira that he remembers. In fact, this woman doesn’t remember anything.  She calls herself Jane Smith, and she has no memory at all of Alerac—or of her own past.

Now that she’s been found, Alerac knows that his enemies are going to start closing in on her. Jane may try to act human, but she’s not. She’s a pureblood vampire princess, incredibly powerful and incredibly valuable.  His enemies want to use her, her enemies want to destroy her, and Alerac—he just wants her.

If he can’t make her remember him, then Alerac has to seduce Jane into loving him once again.  Because now that he’s found her, he’ll fight hell—and every sadistic vampire that stalks the night—in order to keep her safe at his side.

Some bonds go deeper than the flesh. Some go beyond life. Beyond death.

Jane will soon learn that a werewolf’s claiming…is forever.

His hands dropped from her.  “What game are you playing?”

“N-no game.  You’ve got me confused with someone else.” Jane’s words tumbled out too quickly. Desperation would do that to a girl. Make her talk fast. Make her shake and quake.

For a minute, Jane actually thought she might pass out. Just fall right at his feet. Her arms wrapped around her stomach as she swayed “V-vampire?”  Then she shook her head. “You’re crazy!”

Wait, that probably hadn’t been the smartest thing to say to the guy.

A muscle jerked in his jaw. “You think I don’t know what you are?”

“Vampires aren’t real.” She was edging toward the bar’s back door. Just a few more steps, and she’d be able to rush to safety.

The sound stopped her.

His laughter was deep and rumbling and dark. And the man was scary—so terrifying to her. So why in the world did she find the sound of that rough laughter to be sexy?

Maybe I am the crazy one.

“I know your secrets.” He stalked toward her. “Every last one.”

“Stay away from me,” she whispered.

His lips parted. Wait, were his teeth sharper? Those teeth, his canines, sure looked sharper. They appeared to be growing even more so by the moment.

“Am I having a nightmare?” The question slipped from her. Her voice sounded as absolutely lost as she felt.

His fingers lifted once more. Smoothed lightly over her cheek.  “I can take away all of your nightmares. I can make sure you never know another instant of pain or fear in your life.”

Jane couldn’t breathe.  “You’re the thing scaring me the most right now.”

His hand seemed so hot against her flesh.

The light from the back of the building bounced off his sunglasses. She was glad she couldn’t see his eyes. She didn’t want to see them.

The tension stretched between them, but finally—finally—he stepped back.

She took a breath.

“I’m not what you think I am.” Her words flew out so quickly. Desperation again. “I’m not a vampire. I’m not some kind of monster.” Though you sure may be. “Look, I’m just a normal human, okay? My name is Jane and—”

She took another careful step back. “You can’t know me,” Jane whispered. “We’re strangers.” Her frantic heartbeat seemed to be bruising her chest.

Voices rose in the wind then.  Others were coming their way—maybe moving toward the parking lot that waited a few steps back. Hell, maybe they were just heading back that way to get some action in the dark.

Either way, their audience was increasing.

Her dark and deadly stranger tilted his head to study her. “I’ll see you again.”

Not if I see you first.

Then he backed away and actually seemed to just…vanish into the night.

That was good. The whole vanishing bit was really good. Because in the next instant, Jane’s knees gave way and she hit the ground. Hard.

Oh, shit. Her secret was out.