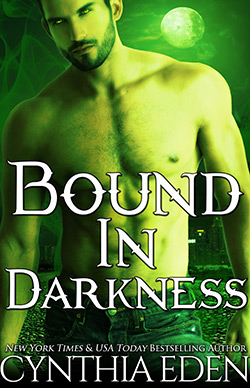 When it comes to killing vampires, werewolf Cade Thain is the best slayer in the Northwest. So when a witch hires him to take out a pureblood vamp, the assassin thinks it will be just business as usual. One less vicious vamp on the streets…one more undead parasite gone from the earth. Then he meets her.

Allison Gray isn’t the prey that Cade expects. Beautiful, innocent, she stirs a dark desire within him. Allison hasn’t transformed fully into a vampire, not yet, and it’s Cade’s job to make sure that she never does. Allison thinks that he’s at her side to keep her safe, but Cade is supposed to pick the right moment—and kill her.

Killing Allison is soon the last thing that Cade plans. As she begins the transformation that will turn her into a vampire, her bloodlust and their desire merge in an explosion of need that neither can control. But Allison’s enemies are closing in, and the coming battle will take Cade and Allison beyond life, beyond love…and into a deadly darkness that waits to claim them both.

Excerpt from BOUND IN DARKNESS (by Cynthia Eden)

He paused and glanced down at her. “You’re afraid of me.” His voice was still a deep rumble.

Allison managed a nod.  Despite her efforts, she couldn’t help it.

“Good,” he told her as he pushed them into a dark alley.

In the next instant, he had her shoved against the alley’s wall. “You should be scared.” His face came toward hers. Dangerous and threatening in the faint moonlight.  “You should be damn wellterrified.”

“You’re being hunted,” he told her, “stalked.  There are people who want you dead.”

“I…I know.” Some had wanted her dead for years.

He leaned in closer.  Odd. His teeth seemed sharper than before. “And you just blindly walk off with me?  How the hell do you know I’m not one of the assholes who wants to kill you?”

She didn’t know that.  But she wasn’t stupid.  Or crazy.

Allison slipped her concealed knife up to press against his heart.

Okay, maybe she was a little crazy.  “If you’re the guide that the witch sent to collect me, then you’ll be able to tell me her name.”

She drew in a breath and could almost taste him because he was so close.

Actually she wanted to taste him. What in the hell was up with that?

Allison pressed her knife harder against his chest. Not hard enough to break the skin, but hard enough to show that she meant business. “Tell me her name.”  So she could trust him. So she wouldn’t have to be alone any more.  “Tell me.”

He glanced down at the knife.  A faint furrow pulled between his brows as if he were trying to figure out a puzzle.

“Elsa,” he breathed the witch’s name slowly.  “Elsa sent me to you.”

Her heartbeat began to slow.  Her knife slid away from his heart. “Then it is you.”  Big, scary, tough—yes, she’d take him, please.  He’d keep her safe. “You’re the one who has been sent—”

He ripped the knife from her hand. Tossed it to the ground. And in the next second, his hand was at her throat. Only…something was wrong.  Something sharp had burst from his fingertips.

He had claws at her throat. Why would—

A shout broke the night.  Not so much a shout, but more a bellow that was her name.

The watcher. She’d only been in town a few hours. Had he already caught up to her?

Thain’s head whipped to the right.  His nostrils twitched. “Vampire.”  He said the word like a curse.