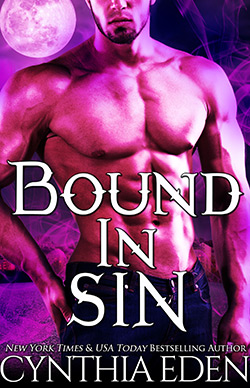 What’s the price of sin?

Human Paige Sloan once loved werewolf Drake Wyler more than life, but then that life was taken away from her. Attacked by vampires, Paige was bitten, and, on a cold, dark night, the life she’d known ended. She was reborn as a vampire–a werewolf’s deadliest enemy.

Paige ran from the vampires who attacked her, and she ran away from her lover. She didn’t want Drake to know what she’d become, and she didn’t want to face the fury of his pack. But a girl can only run for so long until the past catches up with her.

Some sins mark your soul.

When Paige learns that Drake is being targeted for death, she knows that she can’t hide in the shadows any longer. She has to return to him, and she will do anything–anything–in order to make sure that he keeps living. The vampires might have destroyed her chance to live and love Drake, but they won’t take him. Not over her undead body. She’ll slay them all…and maybe, just maybe…she’ll even have the chance to sin–one more time–with the werewolf who’d marked her as his mate.

Some sins are worth dying for…

Excerpt from BOUND IN Sin (by Cynthia Eden)

“I’m being hunted,” she told him in that low, husky voice that made his cock swell even more. He could just see the hint of her fangs behind her red lips. The sight should have repulsed him. It didn’t. “If you don’t help me, I’ll die.”

“You’re already dead.” That knowledge made him feel as if his chest had been ripped open. Since Paige had been human when he’d known her before, she must have been made into a vampire.

A rare few, the purebloods, were actually born as vamps, but the rest of the parasites out there? They’d been turned. They were bled until the point of death, then brought back as a vampire.

Drake would kill the one who’d turned her. He couldn’t wait to hear the vampire’s screams.

“Don’t say that,” Paige snapped at him, then she showed him just how strong she really was. She twisted beneath him and yanked her hands free. A fast roll sent them tumbling across the bed. Then she was on top of him. Her knees straddled his hips, and her hands slammed down against his chest. “I’m as alive as you are!”

Color stained her cheeks. Her breath heaved out. For an instant, they just stared at each other. Then she grabbed his hand and shoved it against her breasts.

“My heart still beats,” she told him and he could feel the frantic beat beneath his hand. That fast beat…and that sweet, plump flesh. Paige was curved in all the right places.

“I breathe,” she told him and he heard the rush of her breath. “I feel. More than you can imagine, all right? So stop treating me like shit!”

Maybe if she’d stop clawing his heart out…

But then, she was doing that just by breathing. Just by being there. Close enough to take…

So take her. The growl was from his beast, one that was never far from the surface these days.

“You want me to protect you.” He held the beast back, barely, because they had a deal to strike. He knew how these bargains worked in the supernatural world. So much could be bartered and exchanged. Flesh. Blood. Sex. Souls.

Sure, humans might be shocked by a deal like this–but then, humans would be shocked to see a man turn into a wolf.

“You came to me, to my pack,” he said slowly, determined not to let his rage escape, not yet, “because you want us to keep you safe.” And he would. He–

Drake frowned. If not for protection, then–

“You’ve got a vampire you want me to fight.” He’d grown used to battling them. In this part of Alaska, where the cold could creep straight to the bone, where darkness could reign for days and days…this part was home to all manner of supernatural beasts.

The ones at the top of the food chain? The wolves…and the vamps who kept trying to fight them for supremacy. A supremacy they weren’t ever getting.

“I’ve got a vampire I want you to behead.” Her breath rushed out. “A vampire named Gabe is the one who made me, he’s–”

Drake’s claws burst from his fingertips and sliced into the bedding. “He’s fucking already dead.” As far as Drake was concerned, the vamp–Gabe–had died the instant he put his fangs in Paige.

Her gaze held his, and he saw the worry there. “Gabe is a pureblood. He’s strong, he’s–”

“No match for an alpha.” Didn’t she get it? He wasn’t the boy she’d left behind. He was a warrior. A monster. A walking nightmare.

Since she’d left him, he’d seen more blood and hell than she could possibly imagine. No, he’d always known the blood and hell…Paige had been the only thing that had been good in his life.

Then she’d left him, and he’d gone back to the darkness.