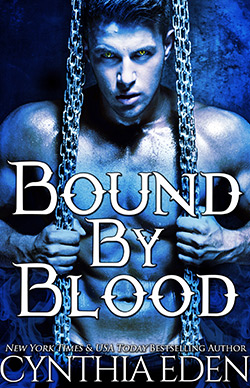 Vampires and werewolves have been blood enemies for centuries, but now a new threat is rising…demons are escaping from hell and those demons are intent on wiping out both the vamps and the werewolves.

When you have no one to trust…

In order to stop the demons, pureblood vampire princess Morgan LaBeaux agrees to the treaty offered by werewolf alpha Jace Vaughn. She’ll mate with him, share her blood with him…and in return, the wolves will aid the vampires in this battle.

The enemy of my enemy is my husband…

But Morgan doesn’t realize just how dangerous the wolves can truly be. Jace has been waiting years to claim her. He’s set a trap for his princess, and now that he has her, Jace doesn’t plan to let her go.  He’ll send the demons back to hell, and he’ll keep his vampiress—forever.

Because the blood binds all.

The sexy little vampiress walked into the bar as if she owned the place.

Since Howling Moon was a low-rent dive hidden on the shadier side of Miami, a bar that catered to werewolves, well, the lady was very much out of fucking place. And, if she wasn’t careful, she might just become the night’s entertainment.

Jace Vaughn tensed when he saw her.  He wasn’t as drunk as the other wolves, not yet anyway, so he recognized the deceptively delicate woman instantly.

He could see the hint of her small fangs peeking out just behind the plump fullness of her too-red lips. Vamps’ fangs always came out when they were about to fight or fuck.

So which one was the vamp about to do?

She stilled inside the doorway of the bar. Her long blond hair tumbled behind her as her gaze raked to the left. To the right. Huh. Looked like she was hunting for someone—or something. In this place, the only thing she’d find was a pack ready to rip her to pieces.

Vampires and wolves weren’t exactly playing nice these days. Or any days.

She should know that.

But then her gaze swept by him. Swept by, then came right back.  Her blue eyes—bright with a vamp’s power—caught his.  She stared at him, and Jace found he couldn’t look away. A vampire’s trick of compulsion?

Nah…more likely just his own lust.  Because the lady was hot.  Most female vamps were, those pureblood ones anyway.  And Jace knew he was looking at one of the elite pureblood Florida vamps.

A pureblood, in a werewolf hell.

He smiled. Fate must be laughing her ass off somewhere.

Then, she smiled too.  A lick of heat shot straight through his body, and the beast that he kept chained inside stretched and growled.

She started walking toward him in her high, fuck-me or fuck-off black boots.  Jace shoved away from the bar.

But the others had noticed her now, and they were closing in.

Three males.  Big and hulking because that was the way of the beast.

“Vampire…” The snarl floated in the air, and the males reached for her.

“No!” His roar broke a second too slowly.

Two of the males crashed into nearby tables.  They’d made the mistake of actually touching her. You didn’t touch a vampiress who didn’t want to be touched. Fools should know that rule.

Excitement had the beast inside yanking on his leash.

Every person in the bar froze for a moment, then instantly turned their attention on her.  The vamp had the third wolf on the floor in front of her.  He hadn’t shifted, not yet, but his claws were already lengthening. She had one small hand at his throat while the other held tight to his hair, yanking his head back to better expose his neck.

Vampires always went for the throat. So predictable.  Their hunger made them weak every time.

“Kill the bitch…” Ah, that mutter came from one of the guys she’d tossed a good ten feet. He was already rising with his claws out and blood dripping from his busted cheek.

Jace lifted his hand, staying the men even as they rose.  “Not…yet.”

He knew no one would disobey. They couldn’t. He was alpha, and if they tried, he’d be the one kicking ass.

Even the shitty band stopped playing as he crossed the room.  The few human females in the bar glanced around curiously, and he saw a couple of the shifters push them toward the back.  The women came to play at Howling Moon. Or rather, the wolves played with them.  Those women knew the score about the supernatural world, and they knew to keep quiet about the paranormal society.

The vampiress didn’t release her grip on her prey.  Jace took his time stalking toward her.  Like most vamps, she had pale, ivory skin.  Her features were…damn, pretty perfect.  Wide eyes, high cheeks, small nose.  Her chin was pointed a little, giving her a slightly stubborn edge, but then, bloodsuckers were not exactly known to be easy going.

She wore all black.  Tight black shirt, a very short black skirt, and those boots that oozed sex.

Sex and violence. Yeah, that was pretty much how vamps and wolves rolled.

As he closed in on her, Jace picked up her scent, separating the light perfume of her skin from the booze, sweat, and the cigarettes in the air.  The vampire smelled sweet, tempting.

Her kind always did. The better to lure their prey in for that deadly bite. But she was—

He inclined his head toward her.  “Let him go.”

“Of course.” Her voice rolled lightly, soft, sensual, but had no accent.  She dropped her hold on the wolf instantly.

Then Mike made the mistake of lunging back up and slicing at her with his claws.

Rage exploded inside of Jace, and he leapt forward even as his own claws broke from his fingertips.

She stepped back, ducked, then shoved her fist right at the wolf’s heart.  Her punch threw Mike back against Jace.

Jace grabbed the wolf and twisted him around.  He lifted the other guy off the floor and glared at him. “I don’t remember giving you permission to attack, Mike.”

He heard the vamp’s breaths panting lightly and knew she wasn’t as controlled as she appeared. No scent of fear, not yet.

“I was invited here,” she said smoothly.

Still trapped in Jace’s grip, Mike twisted and glared over his shoulder. “Who the hell…would be dumb enough to invite a vampire here—”

“Your alpha.”  Her answer came with a shrug as her gaze lifted back to Jace. Then she inclined her head in the smallest of subservient gestures.  Submission. “I was told of your offer, and I’m here to accept.”

Mike’s head swung back toward him. “Jace?” His voice was stronger now. Wolves always healed fast. “What bullshit is she talking about?”

Jace slammed his forehead into Mike’s nose. Bones crunched and blood spurted even as the smaller wolf howled.  Then Jace threw the guy against the nearest wall, one that was about fifteen feet away.  When Mike crashed, he didn’t get up.

Silence. So thick it covered the whole bar. Jace stared at the vamp, trying to keep all emotion from his face.  Then, slowly, he closed the remaining space between him and the woman who was going to change everything for him.

He caught her hand and turned her palm over.  Hell, yes, the mark was there, cradled inside her left hand.  Just like he’d known it would be. A blood-red rose.

He stood close enough to see the circle of gold in her eyes. The faint gold that marked her just as her hand did. She was something far more than an ordinary bloodsucker.

She was a vampire princess.  His key to power, immortality, and she was the perfect weapon that he needed to kick the ass of the demons who’d come to town looking to wipe out his people.

Her lips parted as she stared up at him.  He glimpsed her deceptively delicate fangs.

And he caught the scent of fear as it swept through her.

She was right to be afraid.  Now that she was there, within his grasp, and he’d never let her go.

“I’m Jace.” He let her see his own fangs. “And you’re mine.”  A claim made before all the wolves in the room.  From now on, any wolf who touched her would face him—and death.

She swallowed and tilted her head back to better meet his stare. “Hello, husband.”