NEVER CRY WOLF releases in two weeks (6/28/11). I am counting down the days. 🙂 And since the release is so soon, I thought it was time to share a new excerpt from the book.  Hope you enjoy it! 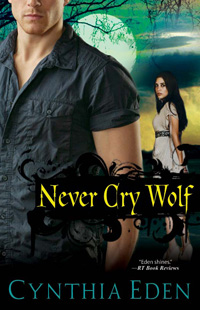 He slanted a dark glance her way.  “Pack protection doesn’t come as cheaply as you seem to think.  I don’t give a shit about the old laws.”

Her stomach dropped.  “If you don’t help me, then I’m the dead one.”

What? “You can’t be that cold of a bastard.  I need your help, and I’ve traveled over seventeen hundred miles to find you.”  Just like John had.  Hopefully, her quest wouldn’t end the same way.

She wasn’t ready to die.

Sarah sucked in a deep breath. “I know who set you up for murder. If you give me protection, and I’ll give him to you.”

Both brows rose.  “Oh, you’ll most definitely give him to me…one way or another.”

Her back teeth clenched.  “I could have left you in jail,” she gritted.

A hard smile. “And I could have let the coyotes have you.”

She flinched. Okay, he had a point there. A rather nasty, cold-hearted one, but…

“You must have done something pretty bad to get a price on your head.”

Not really. She’d actually tried to do something good. That just hadn’t worked out so well.

Yes. Don’t trust me. She bit back the words.  Now wasn’t the time for that much honesty between them.  So she didn’t speak but she managed to hold his stare.

After a moment, he lifted his hand, and offered it, palm-up to her. “Once you come with me, there’s no going back.”

The heated look in his eyes told her he wasn’t just talking about a few days of protection.

But right then, she would have traded what was left of her soul to walk away with Lucas Simone.

“I don’t want to go back.”  The rumors she’d heard over the years, about humans being absorbed into the packs—women, mostly, who disappeared after they were linked with male shifters—those stories drifted through her mind once more.

Some wolf shifters roamed alone. The Lones. Some Lones existed in society, blending almost seamlessly with the humans.  But most of the Lones didn’t blend so well. They had breakdowns. They’d been known to go on killing rampages. Often, they were tagged as serial killers and put down.

And did it matter?

Have a great Tuesday!

This entry was posted on Tuesday, June 14th, 2011 at 8:42 am and is filed under Romance. You can follow any comments to this entry through the RSS feed. Both comments and pings are currently closed.