Guest Post: Jillian Chantal is in the House! :-) Back to Blog

Posted in Romance on November 20th, 2010 by Cynthia Eden

Okay, technically, my friend Jillian Chantal isn’t at my house right now, but she is taking over my blog for the day. Jillian, thanks so much for coming to my blog home!  And congrats on your new release!  The book looks great!

And, because Jillian is such a fun lady, she has a special prize for one commenter. Read on for more details! 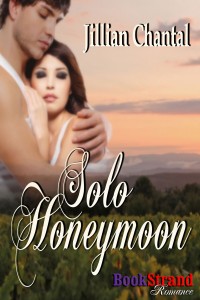 First, I want to thank Cynthia for having me here today. This is a great place to be a guest. Cynthia is an amazing writer and an even more spectacular friend.  She was the first person I met when I joined the Gulf Coast Chapter of RWA. She came over to where I was sitting and greeted me with her boundless energy and joy. She made me feel welcome immediately. Cynthia is the most encouraging person I know and I am proud to call her friend. I’m thrilled that she’s allowed me to visit here to yak a bit about my book release with SirenBookStrand. This is my first novel release. The book is due to be released on November 23, 2010, and I’m beyond excited about it. I write what I like to call Romantic Adventure with an International Flair.

The book is called Solo Honeymoon and categorized as steamy by the publisher. It also has an adult language warning. I can’t help that- there’s a bad dude on the loose and he can’t control his tongue.  There’s also an Italian woman with some pretty harsh words for our heroine.  There are several steamy sex scenes and my hero is quite the alpha male. He’s an Italian Count that’s also a shoe designer. I mean, really, what woman wouldn’t want a hot, Latin lover that also can provide her with shoes to match every outfit?  I’m just saying.

Dario came around to the side of the table where she stood. “I’ve taken the liberty of having dinner served to us here in the conservatory. Please be seated, and the chicken sorrentino will be served.” He pulled out her chair, and she sat.

“What’s in chicken sorrentino? I’ve never had it.”

“Its chicken, eggplant, two kinds of wine, and mushrooms.”

“I had the chef pour some marsala in a pitcher, and I like to add lime juice to it as a aperitivo. Would you like to try it?”

He took a knife from the table and cut the limes open. As he squeezed the limes and smiled at her, she felt her insides melt at the intensity of his stare. His dark brown eyes were bottomless, and she knew she could lose herself in them and never want to come up for air. His hands were strong and capable as they pulverized the limes, and she blushed to think what those hands could do to her body.

“How do you say it…‘a penny for your thoughts,’ Emma?” he asked.

“I have no thoughts.”

He laughed. “So, you’re just sitting there watching me and your mind is blank?”

“Of course not. It’s just that I’m really just relaxing and have no specific thoughts.”

Thankfully, the young man that had brought Emma the note earlier brought in the plates of food at that very moment, and she was spared having to come up with a plausible story of what she had been thinking.

“Emma, are you all right?” Dario asked, interrupting her thoughts.

“Fine. Fine,” she replied as she picked up her fork and took a bite of the chicken.

The food was delicious, and Dario seemed to be on a charm offensive with her as he told her stories of his childhood days with Vincente and their adventures at the estate when they were on holiday from school.

Once the plates had been cleared, Dario stood. “I’ve brought in an old Victrola and would love for you to dance with me. We didn’t get a chance at the town party, and as dancing is my passion, I’d like to share it with you. Will you?” He stood and took off his dinner jacket. The white dress shirt he had on clung to his body. He held his hand out to her, and she rose from her chair and took his hand in her own.

They walked over to the Victrola, and Dario picked out a Viennese waltz by Strauss and put it on the turntable to play. As the scratchy sounds came from the machine, he held out his arms to Emma, and she moved into his dance space, and they began the first steps of the waltz. As soon as Dario touched her back, he stopped short. He spun her around to face away from him.

“Nice dress, Emma. I’m glad your seamstress ran out of fabric and couldn’t finish the back.”

“Very funny, Signore Conti.” She shuddered at his touch.

“Come here, woman,” he said in a low voice as he pulled her to him again.

They danced until the song ended. After the song ended, they stared into each others eyes and kept dancing as Dario hummed until the candles sputtered and went out. At some point, Dario’s hand on her back changed from the waltz position to a caress. She pulled herself closer to him as his hand ran up and down her back and eventually inside the fabric of the dress around to the side of her breast. As soon as his fingers touched her breast, she stopped moving. He stopped as well and, as his thumb inside her dress thrummed her nipple, he bent and kissed her. She groaned, and he said, “Will you go alone again to your bed tonight, bella mia?”

“No matter, bella, I’m not sure I can either. My passione is inflamed for you.”

He smiled. “You noticed?”

Hope you enjoyed the excerpt, and, to celebrate this release on Tuesday, November 23, and in honor of the shoe designer hero, I’m giving away a shoe charm to one commenter.  Tell me your favorite nationality for romantic heroes for a chance to win.

You can pre-order this book at: http://www.bookstrand.com/solo-honeymoon

Visit me at http://jillianchantal.wordpress.com/ And at my group blog on Saturdays: http://southernsizzleromance.wordpress.com/ Or email me at JillianChantal@gmail.com

Thanks again for letting me drop by! Happy Thanksgiving next week to everyone.

This entry was posted on Saturday, November 20th, 2010 at 6:00 am and is filed under Romance. You can follow any comments to this entry through the RSS feed. Both comments and pings are currently closed.