Guest Author Katie Reus (with a PROTECTOR’S MATE giveaway!) Back to Blog

Posted in Romance on April 2nd, 2012 by Cynthia Eden

Update:  Colleen & Brenda Hyde are the winners! Please contact me at katiereus@gmail.com to collect a copy of Protector’s Mate. Thank you everyone who stopped by!

And the guest author love continues! Today’s guest is my buddy Katie Reus (uber talented lady!). Katie writes in two of my absolute favorite romance subgenres: paranormal romance and romantic suspense. Katie, thanks so much for joining us today! 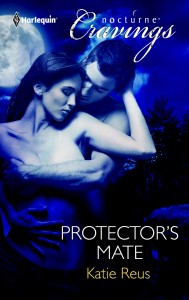 Thank you so much to Cynthia for having me here today! As always, I’m a huge fan of hers and love that she’s always so welcoming. To say thank you for her hospitality I’d like to offer digital copies of Protector’s Mate to two random commenters.

Yesterday I had a release from Harlequin Nocturne Cravings that I’m very excited about. If you read Destined Mate (October 2011), my current release is set in the same world. In Protector’s Mate the two main characters, Felicia and Alaric, get to know one another largely through email while she’s in Afghanistan working as a nurse. This all happens before the actual story starts but it sets the stage for how well they know each other when the story opens.

The idea for Protector’s Mate came to me out of personal experience, which is a rare thing in my writing. Years ago when my husband was in the military (we were engaged at the time) he was sent to Africa for about 5 1/2 months. Though we actually talked on the phone occasionally (a surprising thing) and definitely sent snail mail, we also emailed each other every chance we got, sometimes multiple times a day. Even though I was newly engaged and crazy in love with him, we still had a lot to learn about each other. Thanks to those emails we got to know each other faster than I think we would have had he not been living overseas. There’s a sort of freedom in being completely yourself when writing letters whether they’re typed or handwritten. I drew on that experience when I created the background for Felicia and Alaric so maybe that’s why this story is so special to me.

So…what is Protector’s Mate about?

After two years in a war zone, werewolf Felicia Serna has finally returned to find another pack has taken over her territory…and the new second-in-command is the very man who haunts her fantasies.

Alaric has wanted Felicia from the moment he laid eyes on her, and now he’s ready to claim her. When a threatening shifter begins stalking them, he’s determined to protect her…even if it means putting his seduction on hold. But even in the heat of danger, their red-hot passion cannot be denied.

Felicia Serna wasn’t ready for the shock of cold air that hit her when she exited the sliding glass door of Huntsville International Airport. The chilly February air was a drastic change from the dry heat of Afghanistan.

The airport was bustling but no one would be there to pick her up. She’d kept her return home to Alabama a secret. Well, home was a relative word.  After the way she’d left two years ago, she didn’t think the Alpha of her pack would want to see her. And if he did, it would only be to punish her for defying him. As far as she was concerned, she didn’t belong to his pack anymore and hadn’t for a long time.

She was through with pack rules and through with being someone’s doormat. If she had to live as a lone wolf, so be it. She could take care of herself. Hell, she’d been doing fine on her own for years. The only reason she’d returned was because she had a few human friends here and had shipped most of her belongings back.

As she started to wave down a taxi, a dark SUV with even darker tinted windows pulled up to the curb, blocking her view. She grasped the handle of her suitcase and walked down a few feet so the taxi could see her. It was late and she didn’t want to risk having to wait an hour for another ride. Unlike in Kabul, at least here she didn’t have to worry about safe transportation.

When she raised her hand again, the SUV pulled up farther, effectively blocking her again.

An icy fist clasped around her heart and she tried to shake off the dread that welled up inside her. The driver couldn’t be following her. She was just being paranoid. No one knew she was back. How could they? Before she took another step, the driver’s side door opened and out stepped over six feet of pure muscle and sex appeal and the only shifter who’d ever made her panties dampen with just one look. Her mouth went dry when they made eye contact. What was he doing here? His Alpha’s territory didn’t extend this far north so there was no reason for Alaric to be here unless he was specifically checking up on her. Because she knew for a fact his Alpha had a private plane and he would have no need to be at the airport.

When Alaric, the five-hundred year old shifter who starred in all her fantasies, walked around the front of the vehicle she automatically took a step back. She inwardly cursed the sign of wariness, but if any werewolf intimidated her, it was definitely this one.

Dark hair, dark eyes, generally dark disposition. She’d never seen him in shifted form but, even as a human, the man had a way of putting others on edge in his presence. It was no wonder he was second in command to one of the strongest packs in the United States.

His espresso-colored eyes assessed her from head to foot in a slow sweep. Though she was sure the perusal was cursory, her cheeks heated just the same. She’d forgotten what his mere presence did to her nerves. Okay, maybe not forgotten exactly. Just buried the memory.

Somehow she found her voice and was surprised when it came out strong. “How…why are you here?”

“I’m picking you up.” He answered as if it should be obvious. The deep timbre of his gravelly voice sent a shock of awareness straight to her lower abdomen. She didn’t want to admit that it affected her but just hearing him… She fought off a shiver.

She hadn’t seen him in almost five years, then a few months ago he’d contacted her via email out of the blue. She’d been more shocked than anything that the sexy wolf even remembered her, since they’d only met once before that. When the last few emails had turned flirty, sexual even, it had freaked her out. At first she’d thought maybe she’d misread their tone, but then he’d gotten more blatant and she’d known there was no mistaking he was flirting with her. She’d begun to wonder if he’d maybe confused her with someone else from her old pack. It made no sense for Alaric to be interested in her. So she’d started limiting their contact.

How had he known I’d be at the airport? She wanted to ask but keeping her cool around this wolf was important. Bigger, stronger wolves pounced on any perceived weakness. She’d learned that lesson long ago. Even if Alaric seemed different, she wouldn’t forget the lessons she’d learned as a cub. Some memories went bone deep.

“Knox recently expanded and took over all of northern Alabama. That includes your old pack’s territory—now my Alpha’s territory.” There he went with that voice again.

How did he expect her to think when he talked like that? Wait, what did he just say? His Alpha had taken over? “What happened to Lamont?” Wilson Lamont. Her old Alpha. Even saying that wolf’s name left a bitter taste in her mouth.

He didn’t sound too torn up about it either. Interesting.

Despite the acute relief that splintered through her at the news, she held back her frustration at his fairly vague answer. “When?”

He shrugged in a maddeningly pure male way. “A while ago.”

She resisted the urge to growl. That was most definitely something he should have told her in their email correspondence. At the moment, she was so tired even her eyelids ached. All she wanted was a straight answer. “So your Alpha took over his territory? What about the old members of the pack? And I still don’t understand why you’re here to pick me up.”

His dark gaze narrowed for a second. “Most shifters would say ‘my’ pack, not ‘the’ pack.”

She looked away under his intense scrutiny. When Lamont had demanded she submit to him, in addition to his first mate—as if she were some whore—no one had stepped up to defend her. Screw them. They weren’t her pack. They weren’t her anything. “You didn’t answer my question.”

Out of the corner of her eye she spotted a yellow cab pulling up to the curb. It didn’t look like anyone had claimed it and she didn’t want to miss her chance. She didn’t know why Alaric was here but she wasn’t going to put herself in a position to be at his mercy. “Thanks for coming to the airport, but I’m afraid you wasted your time.”

She turned away from him, but before she’d taken a step he plucked her suitcase and her carry-on from her hands and shoved them in the backseat of the SUV. She blinked once. The man moved lightning fast. Faster than any shifter she’d ever seen.

“What are you doing?” Panic laced her voice and she was unable to mask it.

“You’re coming with me, little wolf.” His voice softened slightly.

Why had his voice gone all husky like that? And why do I like it? Maybe she really was more tired than she realized. She mentally shook herself. It didn’t matter. “Why didn’t you tell me your Alpha had taken over this territory, Alaric? You’ve had plenty of opportunities.”

“Why didn’t you tell me you were leaving Afghanistan?” Now there was no softness in his voice. Just anger and something that sounded a lot like…hurt.

She swallowed hard at the surge of guilt that erupted inside her. The thought of telling him had crossed her mind, but he’d have likely wanted to see her. And after those last few emails… She couldn’t deal with that now. Didn’t want to deal with anything. All she wanted to do was sleep in a soft bed. She shifted from foot to foot as she ran over her options. He had her bags and she certainly couldn’t overpower him. Not to mention, making a scene at the airport was stupid. His reputation was fearsome, but she’d never heard that he hurt females. Not much to go on, but her inner wolf didn’t fear him and that said a lot. She ignored his question and asked another one of her own. “Where are you taking me?”

“Where you belong,” he growled softly. Possessively.

Thanks again for having me here, Cynthia! And thank you to everyone who has stopped by!

A little about me: I’ve been reading romance from a young age—ever since I discovered my mom’s hidden stash. Luckily the addiction stayed with me into adulthood. I write paranormal romance and sexy romantic suspense for Carina Press, Harlequin Nocturne, and NAL/Signet Eclipse. To learn more about me please visit my website, my blog, facebook or find me on twitter @katiereus

This entry was posted on Monday, April 2nd, 2012 at 7:00 am and is filed under Romance. You can follow any comments to this entry through the RSS feed. Both comments and pings are currently closed.