A Deadly Future Back to Blog

Posted in Romance, Contests on January 22nd, 2011 by guest

Robin K. is the winner!

Robin, please email me: contact AT carrielofty DOT com. Select one of Ann’s available solo works (here: http://www.annaguirre.com/books/the-list/) and one of mine (here: http://carrielofty.com/Books.html). I’ll send you your selections to the address you provide. Congratulations!

Thanks to Cindy for inviting me here, and to everyone for stopping by!

Hi, everyone! Carrie Lofty here. Thanks so much to Cynthia for inviting me to stop by today! Her holiday celebrations are almost as much fun as her books are to read.

I’m also in good company. Like Lisa Renee Jones from yesterday’s post, I also have five books coming out in 2011. Hard to believe! The Regency-era Portrait of Seduction will be released in May from Carina Press, and in November I begin a new Victorian series from Pocket, which kicks off with His Vows to Keep. All very lovely and historical.

But not very deadly. I think only one villain bites in between the two books.

With Ellen Connor however…that’s where the deadly fun really starts. 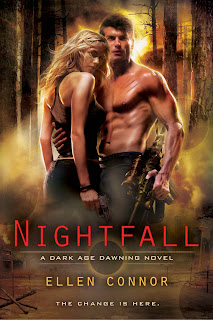 Ellen Connor is the pseudonym I share with my friend Ann Aguirre. In late 2008 we decided to give co-writing a try, when Ann had an idea for an apocalyptic romance. Vicious monster dogs. Shapeshifters. End-of-the-world horrors. Oh, and amazingly hot sex between our tough chick, Jenna, and her ex-military partner, Mason. Thus Nightfall was born, the first of our “Dark Age Dawning” trilogy from Berkley.

Writing it was a blast. We wrote for ourselves, just enjoying the freedom of tackling a project without any expectations. We didn’t even know if we could work together long-term! But the deeper we climbed into our apocalyptic world, the more fun we had. And the more bodies piled up.

It was quite the change for me. My medieval romances had a slightly higher body count–you know, all those random guards that have to be fought when escaping a castle–but this was entirely different. We had to figure out how to kill evil monsters using WD-40. We had to decide how people would go about eating while trapped in a bunker with no electricity. And as a bonus, we even managed a way to make having sex in a Home Depot ultra hot. Doubters! Fear not! It is very possible! 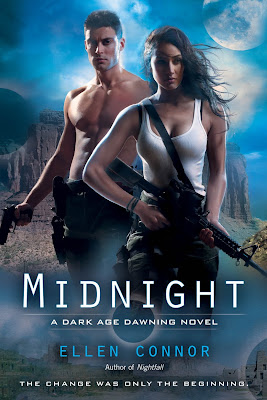 What I learned is that there are just as many difficulties in writing a fictional world as there are in recreating an historical setting. (I’d never done this before, so the process was surprising.) When we had a question about what was happening, I couldn’t consult a book or find a primary source. Nope. Just…make it up? Really? The answers to all of our deadly, nasty, drooling, shapeshifting problems were all in our brains. Sometimes two brains gave us a problem-solving edge. Sometimes we had two very different ideas about how the story should proceed.

So needless to say, it was unlike any writing experience either of us had ever had. We successfully recreated the magic formula when we tackled Midnight this past summer, and we’re hip-deep in Daybreak right this moment. The trio hits the shelves in June, September and December. Here’s a little taste of Nightfall:

From out of the enveloping darkness, Jenna caught the faint baying of distant hounds. Only they didn’t sound like any dogs she’d ever heard. Their howls echoed with an unwholesome wetness, as if they keened through blood. Her heart skipped a beat, and the cold cut through her jacket like icy knives.

The second scariest part? Mason was about the most harmless thing in the woods.

“We have to get back to the cabin.” He tugged her hand. “You’re not ready for a fight.”

He leveled a steady look on her, his confidence and secrets almost hidden in the near dark. “Yes.”

Jenna had no time to think about that, stumbling as he pulled her back toward the cabin. She hunched into her jacket, feeling naked and undone. They sounded closer now. She smelled them too, a noxious stench that reminded her of graveyards. In her mind’s eye, she could almost see them, hideous skeletal things with flesh barely clinging to bone.

But that was crazy. They were just dogs, some strays that had gone feral.

Shadows flashed in her peripheral vision. She put on more speed, the feeling of life or death hitting her hard. The threat was intuitive, on a soul-deep level, and kicked her flight response into high gear. Dry, brittle branches whipped her face as they ran. They felt like bony fingers clawing at her skin, and she swallowed a scream.

I want to wake up now. Time to wake up. The only reply to her desperation came in the form of Mason’s warm fingers twined with hers.

Are you a fan of apocalyptic romances? Does the idea of a happy ending even at the end of the world work for you as a romance? Leave a comment or question and I’ll give one random winner a book from my backlist and one from Ann’s. Your choice. Good luck!

This entry was posted on Saturday, January 22nd, 2011 at 9:00 am and is filed under Romance, Contests. You can follow any comments to this entry through the RSS feed. Both comments and pings are currently closed.

61 responses to “A Deadly Future”