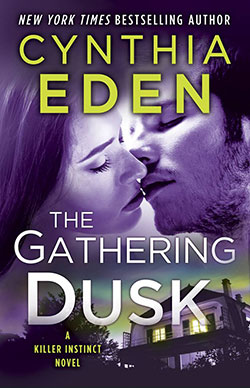 When untried FBI profiler Samantha Dark is face-to-face with a killer, there’s no room for fear. Her best weapon is her instincts. Those same dark impulses that allow her to get inside the mind of a murderer, to locate victims—or to pull the trigger before she’s next. She can’t afford to have those instincts clouded by anything…especially her far-too-sexy new partner.

Former SEAL Blake Gamble plays everything by the book. Except, of course, when it comes to the increasingly simmering attraction between them. But when a vengeful serial killer targets them both, Samantha once again reaches into the sinister, shadowed part of herself. Even as she begins to fear that the only way to catch this killer is to become one…

Look for After the Dark, the first in the Killer Instinct series, from HQN Books!

Author’s Note:  I am very excited to launch my new “Killer Instinct” series with HQN.  For the Killer Instinct titles, the main characters will all have deep, intimate connections to serial killers. The killers could be their family members, their friends, or even their lovers. Just what happens to a person who is so closely tied to a killer? You can find out in the books…

Books in the “Killer Instinct” series published by HQN:

In addition, there are two Harlequin Intrigue novels that are set in the same Killer Instinct “world” for readers:

Sam. Just the way he said her name was like a caress. Her eyes opened. They were walking a very thin line, she knew it. The attraction was there, just waiting between them. But FBI partners couldn’t get personally involved. They couldn’t sleep together. They couldn’t give in to a hunger that had been there, right from the first touch.

“You’re a former soldier,” she told him. “Enlisted when you were eighteen. Then went to college, studied criminal justice. You fought the bad guys in the war, then you came home to fight the bad guys on our own soil. You requested to work in Violent Crimes because you’re not afraid of a challenge—you want to take down the worst of the worst. A good guy mentality at its finest.” A hero mentality.

He drove in silence.

Her gaze slid to him, and she realized that his hard jaw was tightly clenched. A muscle jerked in his cheek.  “Sorry,” she said. Sometimes, she just did that.  Couldn’t turn off her brain when she met someone. “People are like puzzles to me. I always…I have this need to figure them out.”

He pulled off the road—just pulled right off that quiet highway until they were sitting on the shoulder.  He shifted the SUV into park and then turned to stare at her.

“You have me squared away in your head, don’t you? The safe guy?  The rule follower?”

“Um…there isn’t anything wrong with that.”

His fingers tapped along the steering wheel.  His gaze had turned dark. Turbulent. And that hard stare of his drifted down to the bandage on her arm. “I don’t like you getting hurt.”

“I don’t like being hurt.” She tried to lighten the sudden, thick tension between them.  She could almost see the line between them—a line they couldn’t cross.

“When I saw your blood, I wanted to rip George Farris apart.”

“The dead don’t feel pain,” she said.  She’d given herself comfort with those words so many times over the years.

“No, that luxury is just for us, isn’t it?”  Now his gaze had come back to her face.  “You’re damn good when it comes to killers. Don’t know that I’ve ever seen anyone work quite the way you do. Bass and the other agents on our team—they weren’t looking at Farris.”

No, they’d focused their attention on another man, one county over.  A man who was recently divorced, a loner now, but…He didn’t fit my profile. He still had too many strong ties. He hadn’t been pulling away from society. Not like George.

“You see things that others don’t…” A slight pause. “When it comes to killers.”

“You’re saying I don’t understand you?”

His fingers stilled. “Do you think I’m a killer?”

Oh, yes, she would need to tread very carefully here. “Just because you fought and fired in the line of duty, it doesn’t mean—”

“You read my fucking confidential files.”  Anger thickened his voice. It was the first time his anger had been directed at her. She didn’t like it.

“No,” Samantha fought to keep the emotion from her voice. That was one of her talents. When it came to locking down her feelings and giving the world a perfect mask to view, she was at the top of the class. “I didn’t.” But his words had just confirmed what she’d suspected when she’d begun to build a profile on him.

She cleared her throat. “We need to get back to the office.” They were just outside of Richmond, and the drive back to D.C. wouldn’t be an easy one, not at this time of the day.  “Let’s just go, okay?”

He hesitated, and Samantha thought that he was going to push her. She tensed, but he gave a grim nod.  He cranked the engine once more.  Shifted to park and—

“Just because you have to fire,” Blake said, not looking at her, “in order to save yourself and your partner, that doesn’t make you a killer, either.”

No, but it did make her into someone…who had killed.