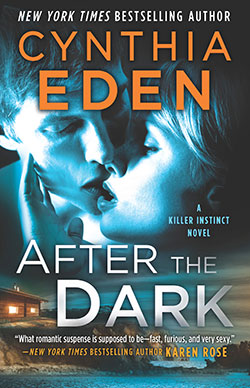 After The Dark Audio Sample

In this gripping new series by New York Times bestselling author Cynthia Eden, a disgraced FBI profiler must save her reputation by stopping a sadistic killer she knows all too well.

Former FBI agent Samantha Dark was one of the most respected profilers in the bureau, an expert on the twisted minds and dark hearts of the most depraved criminals. But when her own former lover turned out to be the serial killer she was hunting, Samantha’s career was destroyed. Blamed for the FBI’s failure on the complex case, Samantha fled Washington, DC, for the quiet anonymity of Alabama.

Now an all-too-familiar killer is hunting once again. She can catch the sadistic assassin, but that means putting her trust in her former partner, Blake Gamble. Ex-military, Blake is tough, protective, precise. With her entire life on the brink, she knows he wants her back in the FBI…and possibly more.

But someone else wants her, too. A threat is waiting in the dark, a killer who has set his sights on the ultimate trophy victim—Samantha.

“Eden shines with this taut romantic thriller, which opens her Killer Instincts series…Eden pulls readers into Samantha’s head from the first page and takes them on a first-class thrill ride, complete with effective red herrings and characters who practically leap off the page. This tale could have been ripped from today’s newspaper headlines; it’s deeply disturbing and impressively believable.”

– Publishers Weekly on AFTER THE DARK

Just seeing him hurt right then. She’d walked away from D.C. for a reason.  She sure hadn’t intended to be seeing Blake again anytime soon. Just looking into his eyes made her feel as if someone had ripped open her heart.

The way he’d stared at her…back in D.C. When he’d found her, half-naked, covered in blood… Samantha cleared her throat. “Why are you here?” she asked him again.

“Because I need you.”

Those words were rough. All rumbly. Her eyes raked over him. She didn’t think he meant that he needed her in a personal way. No, he had to mean—

For an instant, her heart stopped.  She couldn’t breathe, couldn’t move.  And then… “No!” A fierce denial. With that cry, her heart began to race in her chest. Her breath came in quick pants. Even though sweat covered her from the run, Samantha was suddenly freezing. “You’re wrong.”

“I wish that I was. Cameron Latham is hunting again. Playing his sick games. Doing his experiments.”

“And I need you to help me stop him.”

She shook her head. “You came to the wrong woman. I’m not FBI any longer.” Like he’d need that reminder.

“You’re the right woman. You exactly the woman I need.”

Her body was so tense her muscles ached.

Her cheeks burned. Yes, she knew him intimately.

“You can stop him, Samantha. You can build a new profile on him. You were in his head before and I know you can get right back there again.”

She looked away from Blake and grabbed for the handle of her car door. She yanked it open—

“Unless you don’t want to stop him.”

“Bass still thinks you let Cameron walk. He doesn’t believe that you wanted to put your lover behind bars.”

“Ex-lover.”  How many times had she said that? She glanced up at him, knowing that a glare would be on her face. “As I’ve said before, Cameron and I hadn’t been involved that way in a long time.” She climbed into the car. Her hands fisted around the steering wheel.

His question was so low that she barely heard it.

And since she was already walking on the tight-rope of a whole give-him-hell attitude, she offered her former partner a grim smile. Why not? “Because of you, of course.  I met you and didn’t want to be with anyone else.”

His shock was plain to see.

Before he could ask any other questions—questions she didn’t want to answer—Samantha yanked the car door closed. She started the vehicle and headed out of the lot, leaving Blake behind.

She didn’t start shaking until she was nearly home, but then the trembles came, rocking her whole body.  He’s doing it again. She hoped that Blake was wrong. He had to be wrong.

Because if Cameron was hunting again, it would only be a matter of time before he came after her.