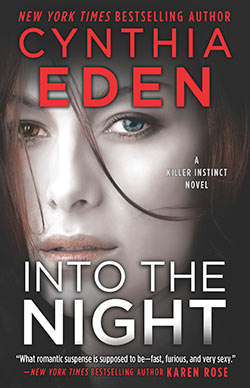 Into The Night Audio Sample

Sheltered in the shadows of the Smoky Mountains is the suspect who’s summoned FBI agent Macey Night’s fears to the surface. Every day that the “Profiler,” a vigilante serial killer, escapes justice is another day she’s reminded of what it is to be a ruthless predator’s prey. Capturing him is a craving deeper than anything she’s felt in a long time. But Agent Bowen Murphy, equal parts sexy and volatile, seems hell-bent on changing that. Working together—needing, living and breathing each other—they’re entwined to distraction.

Bowen’s used to operating on impulse: act, don’t feel. Now Macey and the controlled terror behind her beautiful eyes have him rethinking everything, including his rule to never get close to a colleague. He’s willing to fight for a future with Macey, but the consequences of love could be deadly.

Bowen Murphy had one weakness in this world, and that weakness was named Macey Night. The beautiful, brilliant and very, very untouchable Macey Night.

He watched her now as she headed down the flight of stairs that led to the medical examiner’s office in Hiddlewood. Their flight to North Carolina had been brief—and quiet. Macey wasn’t the kind of person who filled the air with idle chitchat. Macey was intense, Macey was focused…and Macey had been driving him insane for years.

Ever since he’d first walked into the FBI’s DC office and seen her.

He’d heard her story before he met her. The woman who’d escaped from the infamous Doctor, the MD who’d walked away from her medical career so that she could catch violent criminals. Macey came in a small package, she barely skimmed over five feet three inches, but the woman was pure power. She was dead-on with her gun, and when it came to crime scenes, she always seemed to find details that others overlooked.

And as for the bodies…

They’d reached the end of the stairs. Macey looked back up at him, brushing her hair over her shoulders. Her red hair was straight and fell in a blunt cut that framed her delicate face perfectly. Her gaze drifted to him, and that gaze was as unnerving as always. And not because she had two different-colored eyes—something he found oddly sexy—because it was her. Because he often felt as if Macey could see straight into him.

A bad thing. Because inside? He was dark and twisted.

“Dr. Lopez is supposed to have the victim ready for us. I just need to get a look at the vic’s wounds, and then we can go forward from there.”

By going forward, he hoped that meant a fast trip to the crime scene. He wanted to get hunting. Because even if the perp wasn’t Daniel Haddox, that meant they still had a killer out there. One that needed to be stopped before anyone else was hurt.

Macey adjusted her sleeves, a move he’d seen her do dozens of times, and Bowen’s hand flew out, wrapping around her wrist. “You don’t need to hide.”

He felt her pulse jump beneath his fingers.

“Your scars don’t matter, Mace,” he continued, staring into her eyes. “Forget about them.”

“I can’t.” He saw a crack in her mask. A glimpse at the pain she always carried on her own. “They remind me that I let him get away. That I didn’t stop him.”

Fuck that. “You were a victim who escaped a sadistic bastard.” And his fingers slid under her right sleeve. He felt the faint line of raised skin there. “The only thing these scars should do is tell you how strong you are.”

Her lips parted. She stared up at him and he was leaning in toward her. Too close. He should back away. He should let her go. But her sweet scent—Macey always smelled like lavender—had wrapped around him. He didn’t want to back away. He wanted to get closer.

The door opened down the hallway. “Dr. Night?” A feminine voice called.

Macey pulled her wrist from his grip. “Yes, I’m Special Agent Night.” She nodded toward Bowen. “And this is my partner, Special Agent Bowen Murphy.”

The woman hurried forward as she offered her hand first to Macey, then to Bowen. “Sofia Lopez.” She wore a white lab coat and her dark hair was pulled into a bun at the base of her neck. Dr. Lopez was young, probably close to thirty, and her dark gaze was steady. “I’m so glad that you both came down here. As soon as I saw the body…those marks on the arms…” Her gaze slid right back to Macey. “I immediately thought of you.”

But Dr. Lopez shook her head. “That sounded wrong. Let me try again.” She offered Macey a weak smile of apology. “I remembered your story. A few years ago, it was splashed all over the news. I always follow the big crime stories. I’m something of a crime buff. But with my job, guess that makes sense, huh?”

Very few stories had been as big as Daniel Haddox’s gory tale. The public had an unquenchable appetite for darkness. At least, that was how it seemed to Bowen. And the handsome doctor who’d been slicing up his patients? Hell, three movies had been made about him.

Dr. Lopez cleared her throat. “The wounds you received on your arms were very specific, and when it was revealed that Dr. Haddox marked all of his victims that way—”

“Why don’t you show us this victim?” Bowen cut in. Macey looked uncomfortable and she was back to tugging at her sleeve.

“This victim, right!” Dr. Lopez said. She spun on her heel. “I have her waiting on my table.”

Bowen followed the ME and Macey into the exam room. As soon as he stepped inside, the smell hit him like a punch. He hated the odor that he always found waiting within the labs of coroners or medical examiners. Bleach, bodies, hell.

But he approached the exam area determinedly, his gaze sweeping over the woman on the table. The woman had pale blonde hair, delicate features and appeared to be in her early twenties. “Do we have an ID for the vic yet?”

“Yes.” The ME pulled up a chart. “The crime team actually recovered her driver’s license at the scene. She’s Gale Collins, twenty-two, a college student at the University of North Carolina.”

“Where was she found?” Bowen asked.

The ME’s lips pulled down. “She was…she was dumped in town. Literally. Her body was just tossed behind one of the motels. She wasn’t killed there,” Dr. Lopez added quickly. “Not enough blood at the scene. Someone just wanted to get rid of her body.”

Macey’s brows furrowed. “That wasn’t part of Daniel’s MO. He didn’t give up his prey.”

No, the sick prick had sealed them in the walls of his hospital. But since the guy didn’t have a hospital any longer, maybe he’d had no choice.

“Based on the body decomp and lividity, I think our vic was killed within the last forty-eight hours.” The ME blew out a quick breath. “I’ll be able to narrow down that time frame with more testing.”

“Were there any signs that she’d recently had surgery?” Macey asked quietly as she pulled on a pair of gloves. Bowen stood back. Macey was the one who worked on the bodies. He had a rule about the dead—he gave them justice, but he didn’t examine them. Hell, no, that wasn’t his department. So Bowen locked his arms over his chest and watched her work.

“Nothing that I could detect with a preliminary exam,” Dr. Lopez replied.

Macey pulled back the sheet and her eyes narrowed.

Bowen blew out a hard breath. The Doctor made a mess of her. Anger tightened his body. The son of a bitch sure seemed to like hurting women.

Macey’s fingers trembled around the sheet. “Well, here, at least, he stuck to his pattern.”

“He hurt her for a very long time,” Macey added softly. She cleared her throat. “I’m assuming you’ve already started the blood work to find out what mix of drugs he gave to the victim?” Her fingers slid toward the victim’s wrist. “The bruising here is consistent with straps being used to secure the patient. He locked the straps very tightly.” She swallowed. “Probably because he wanted to be sure that he never made the same mistake again with a victim.”

Her gaze slid to Bowen. He knew exactly what she meant. The mistake he made with you, Macey? When you were able to slip away from the bastard?

Macey moved around the table and lifted the sheet so that she could study the victim’s ankles. “More bruising,” she murmured. “The Doctor secured his victims both by their wrists and their ankles so that they could not escape his procedures.”

“His procedures?” The words burst from Bowen. “You mean his tortures.”

The ME’s eyes widened as she stared at him, but Macey’s expression never altered.

Shit. Get the control back. He knew how to handle a scene like this. By the fucking book. The problem was that when he looked at the victim on that exam table, he kept seeing Macey. Kept seeing what could have happened to Macey five years ago if she hadn’t managed to get away.

And he saw what had happened to her. And if that perp was up there, if he was still in the small mountain town…