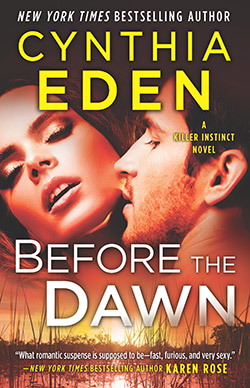 Before The Dawn Audio Sample

The Killer Instinct series from New York Times bestselling author Cynthia Eden continues as an FBI profiler tracks a case that resurrects ghosts from his past.

Ex-SEAL Tucker Frost knows that the world is full of evil. He saw it in the face of his own brother, Jason Frost, a cold, methodical, sadistic killer. A killer Tucker put down with his own hands in order to save Jason’s final victim—Dawn Alexander, the only girl who got away from the infamous “Iceman.”

It’s Tucker’s up close and personal experience with evil that’s made him perfect for Samantha Dark’s experimental profiling division in the FBI. Samantha wants agents who have personal ties with killers, who have unique insights into the minds of monsters. And when women start turning up murdered with the same MO used by the Iceman, Tucker is sent back to Louisiana to investigate.

The last person he expects to see is his ex-lover, Dawn. Seven years have passed since the night that Tucker faced down his brother…and since he last saw Dawn. But the dark need still burns just as hot between Tucker and Dawn. As they grapple with a desire that never died, they must also face the shared shadow from their pasts. Both Tucker and Dawn have the same question—has Jason Frost come back from the dead to hunt again? And this time, will he succeed in killing the victim who got away?

Dawn took a step forward and she shut the door behind her.

Tucker kept his hands at his sides. He tried to figure out just what in the hell he was supposed to say to her. The silence stretched a little too long—uncomfortably long. Her gaze was on his face, sweeping over his features one at a time, and he knew what she was thinking.

I look even more like him now. Time had thinned his face more, hardened him, and when he looked in the mirror, most days Tucker swore he saw his brother staring back at him.

Shit. That had been the wrong thing to say. He wanted to yank his hand over his face or pace or do something to get rid of the fierce energy pulsing through him.

“That’s what you have to say to me? After all this time?” Her voice was still husky but he could have sworn he heard an echo of pain in it.

“Why didn’t you come in there to tell me about this case?” She put her hands on her hips as she stared up at him. “Why send in your partner?”

He wouldn’t lie to her. “Because I knew you didn’t want to see me.” That was the same reason he’d left her so long ago. Why he hadn’t talked to her in the last seven years.

“You know bullshit.” She shook her head. Her blonde hair hit her sharp cheeks. “No, you just know your own fear. You don’t know anything about me or what I want.”

Her words surprised him and he took a quick step toward her. But…

She tensed. He saw it and the telling movement knifed right through him.

No, Dawn. I do know you. Better than you know yourself. I always knew you.

The problem was that she hadn’t truly known him. He’d been afraid for her to know the truth. He was still afraid. You won’t like who I really am.

“What’s happening in this city? Who killed that poor woman?”

“I don’t know.” He’d be finding out soon. “We thought you had a right to hear about the crime first, before any news leaked to the media.” He hadn’t wanted her learning about this killer when she turned on the five o’clock news.

“Maybe that’s true, but I also think you wanted to see my reaction. You know, just in case I’d gone psycho and started killing like Jason.” She pursed her lips, as if thinking about that situation. “What would that be? Some serious PTSD shit, right? Your buddy Macey sure acted as if it were a possibility.”

He’d always thought she was the strongest woman he’d ever met.

“I’m strong,” she said again, “and I want in on this investigation.”

It took a moment for her words to register. Then he could only blink and shake his head. “What?”

She pulled her ID out of the small bag that was slung over her shoulder. She advanced toward him and her scent—soft, vanilla—wrapped around Tucker, reminding him of things he should forget. Of things he had no business remembering right then. “I’m a PI now. A damn good one. I know this city, I know the people here, and I want in on the investigation.”

He glanced at her ID, but he’d already known she was a PI. He’d researched her… He’d peeked into her life many times over the years. He’d always thought that, one day, he’d check up on her and discover that she was married. That she had a family. That she was happy.

He’d both longed for her happiness and feared it. Because I couldn’t imagine her with anyone else.

“I want in,” Dawn said again, her expression determined.