Marked By The Vampire 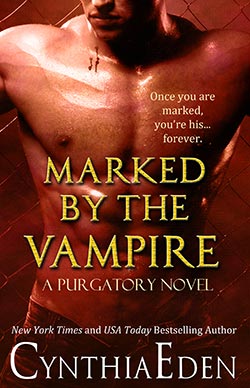 Vampires exist. So do werewolves. The creatures that you fear in the darkness? They’re all real. And the baddest of the paranormals…those who love to hurt humans…they’re sent to Purgatory, the only paranormal prison in the U.S.

His job is to stop the monsters.

Deadly forces are at work within Purgatory. The monsters are joining together—and their plans have to be stopped. FBI Agent Shane August, a very powerful vampire with a dark past, is sent into the prison on an undercover assignment. His job is to infiltrate the vampire clan, by any means necessary.

She wants to help the prisoners.

Dr. Olivia Maddox wants to find out just why certain paranormals go bad. What pushes some vampires over the edge? Why do some werewolves turn so savage? If she can understand the monsters, then Olivia thinks she can help them. When she gets permission to enter Purgatory, Olivia believes she is being given the research opportunity of a lifetime.

To survive, they have to rely on each other.

When the prisoners break loose, there is only one person—one vampire—who can protect her, but as Olivia and Shane fight the enemies that surround them, a dark and dangerous passion stirs to life between the doctor and the vamp. Shane realizes that Olivia is a woman carrying secrets—powerful, sinful secrets. Secrets that a man would kill to possess.

And Olivia realizes that—sometimes—you can’t control the beast inside of you. No matter how hard you try. Some passions can push you to the very limits of your control…and the growing lust that she feels for her vampire…it’s sending her racing right into a deadly storm of desire.

Excerpt from MARKED BY THE VAMPIRE (Available 6/9/14)

The waves were starting to get rough, and the boat rolled beneath her. “I’m so sorry that I’m late,” Olivia began, voice breathless, “I had to rush back to the university to—”

Her words ended in a dead stop because she’d just gotten a look at the other passengers on that ferry.

Three armed guards, all wearing black, all with their weapons out and pointed at the man who stood just a few feet away from Olivia. At the man who was currently watching her with a predatory stare. His green eyes seemed to glow with an unholy hunger…a dark need…as they swept over her.

“Well, well,” the man said, his words low and rumbling. “This trip just got one hell of a lot more interesting.”

He was shackled. The chains circled his hands and his feet, but the shackles just seemed…ridiculous on him. Useless. Power emanated from him, and the guy’s strong body made a mockery of the restraints. He was big, easily six foot three or four, and his shoulders were wide, his arms rippling with power and—

“Like what you see?” he asked, lifting one blond brow. “Because I sure do.”

Olivia sucked in a sharp breath then she jerked her gaze off that prisoner. Instead, she focused on the nearest guard. “I-I didn’t realize a prisoner transport was occurring today.” Her heart thudded too hard in her chest.

A shiver slid over her, and it wasn’t caused by the cold rain.