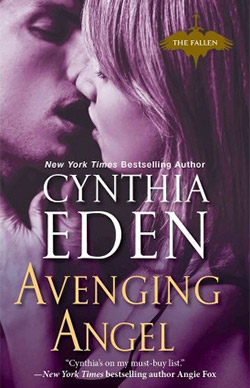 With a messed up family background and a tendency to grow claws and fangs, Tanner Chance isn’t exactly the boy next door. But he’s a decent cop, and he keeps himself on the side of the good guys. Convenient, because when he rescues a survivor of a horrific shifter attack he finds himself instantly smitten—with an honest-to-goodness angel, as innocent as she is irresistible.

Marna may be angelic, but she’s not stupid or weak. She can take care of herself. Tanner is more temptation than protection anyway. Or so she thinks, until someone wearing her face starts taking out some of New Orleans’ more unsavory paranormals. With police and predators both gunning for her blood, Marna has no choice but to trust Tanner…even though what’s sparking between them is hotter than anything holy.

The delicate angel had broken.

Did she even realize that tears slid down her cheeks? Tanner Chance kept guard by her side. His hand was on her arm, stroking her.

He couldn’t seem to stop touching her.

They’d found her body in the swamp. At first, he’d thought that she was already dead.

Then she’d moved, and he’d realized just what his sick freak of a brother had done.

Sliced the wings right off an angel.

Her lashes lifted and her eyes, the palest blue he’d ever seen, locked right on him. No, those eyes seemed to see right through him. Tanner cleared his throat. He was a cop. He’d spent too many years seeing blank expressions like that on the faces of victims. “You…you’re safe now.” He’d keep her safe. “You just need to rest.”

She didn’t speak, and he didn’t know what else he was supposed to say to her. He never knew what to say to the victims. He just knew how to make the bastards who hurt them pay.

He was very good at delivering justice. But this time…

She had to hate him. She knew who he was. Knew that his brother was the fucked-up asshole who’d tortured her. Tanner cleared his throat and finally managed to tell her, “I’m not like him.”

Her eyes never left his.

And he was still touching her. Her skin was the softest he’d ever felt. The smoothest. Her flesh was golden and perfect.

Or, it had been, until claws had ripped into her back and torn that flesh wide open.

Tanner leaned closer because he could barely hear her words. “What is it? What do you need?” Anything. He’d do—

“When I’m stronger, you should…stay away from me.”

He glanced at her small hands. They’d had to bind her wrists when they strapped her down. Not to hurt her, but to keep the little blond angel from hurting them.

The angel before him—Marna—she wasn’t some sweet and gentle guardian angel.

She was an angel of death. One who could, and had, killed with just a touch.

He could touch her all that he wanted. That was the way the game worked with angels. But the instant her hand touched him…

If she wanted him dead, all she had to do was touch him, and she could send him straight to hell.

She smiled at him. The smile made her seem even lovelier and then the angel said, “When I’m stronger, when I’m free…get as far away from me as you can.” The faintest of pauses then, “Because I’ll have my vengeance.”

She didn’t look so broken anymore.

He didn’t move, and he damn well kept touching her. “I’m not the running kind.” Not anymore. The scared kid he’d been had died long ago. Now he fought any bastard who came his way—and he made sure to win his battles.

His angel kept her cold smile and told him, “Wait and see…you will be…”

“Eden returns to her alternate New Orleans in the red-hot fourth installment of the Fallen paranormal series (after Angel in Chains)…Eden delivers a satisfying tale full of pulse-pounding action and passion.” —Publishers Weekly

“Marna goes through a metamorphosis, beginning the book as an angel who’s vulnerable and scared, tortured by memories of losing her wings, and finishing with strength, power, and conviction…They have a steamy relationship and will quickly become a favorite in the Fallen series.” 4 1/2 Stars, RT BookReviews