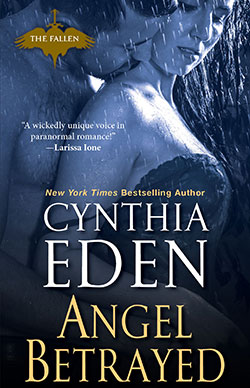 Sammael–call him Sam–was an angel once. An Angel of Death. But the dispassionate, watch-from-above thing just wasn’t working for him when it meant watching evil torture innocent souls day in and day out. It might have cost him his wings, but these days he gets to apply the direct method on the bad guys. Problem is, what’s making his life difficult is a bad girl…

Seline O’Shaw needs protection, and with the hounds of hell on her tail, she’s not going to quibble too hard about where she gets it. Sam’s virtue is questionable, but he’s smoking hot, massively powerful, and owes her a favor. So what if she’s getting a little case of angel lust? There are some damn deadly sins after her hide…

“So you need protection.” His stare narrowed on her. “What, exactly, does that mean?” He paused. “Do you need a guard? Someone to watch over you? Or…” His left hand rose. His fingers curved under her cheek and his thumb brushed over her lips. Her breath caught, and her heart raced in her chest. “Do you want me to kill someone for you, Seline?”

Killing would be easy for him.  Sometimes, she worried it might become too easy for her. “I-I don’t know what do to.  I’ve been hiding, and I thought I was safe, but they found me.”

“They?”  His right hand still cradled her thigh and seemed to scorch her flesh.

“His friends. They know what I did, and they aren’t the kind of men you can just walk away from.”  She let fear seep into her voice. The better to sound weak. Such a lie. “They’re dangerous, Sam, and they’ve got a lot of power.”

His gaze searched hers.  Then his mouth dipped close to hers.  Seline stopped breathing.  He was going to kiss her and her hormones would go wild. Control. She had to stay in—

He didn’t kiss her. He smiled. And dammit, she’d actually been pressing up on her toes to get closer to him.

Heat stained her cheeks. I don’t blush. But she was—or rather, she’d started blushing since she met Sam.  He made her too uncomfortable.

“What makes you think I’m the kind of man who offers protection?”

She didn’t think he’d give her protection. She wasn’t a fool. He wasn’t the protecting kind.

He was the killing kind.

She wet her lips and felt the tension mount in his body. “I know what you are.” Half-truth. She knew what he wasn’t. She was still working on the rest.  Out of a thousand possibilities, she’d narrowed down the choices to a top five list—and nothing on that list was good.

Now this was the dangerous part. If she’d calculated wrong, he could attack her.  Good thing she wasn’t very easy to kill. “You’re not human.” This she knew with absolute certainty. Demons didn’t play guard bitch to humans.  The food chain didn’t work that way.

No change of expression crossed his face.  But his head came closer to hers and his lips—why would that cruel edge be sexy?—pressed against her mouth.  She expected the kiss to be hard and rough. What else? But when his mouth took hers, it was just…a taste.

His tongue licked her lips and stroked inside her mouth.  Slow. Easy. As if he were sampling her.

Her tongue slipped to meet his. To taste.  To want.

His gaze studied her a moment, and she barely dared to breathe. “I’m not human,” he finally agreed, his voice a deep rumble. “But neither are you, sweetheart. Neither are you.”

“The second installment of Eden’s action-packed, dark paranormal series the Fallen (after Angel of Darkness) centers on a deposed angel of death and his half-breed succubus flame. Kicked out of Heaven for extralegally punishing a group of rapists and killers, an unrepentant Sammael ends up in New Orleans. There he meets Seline O’Shaw—daughter of an angel and an incubus—who has her own dark agenda…Eden offers compelling characters, sizzling sex, and breakneck action in this solid effort that sets the stage for the third book, due November 2012.”–Publishers Weekly