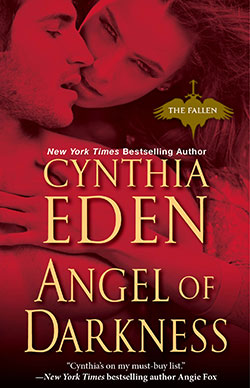 As an angel of death, Keenan’s job is to collect the souls on his list. He’s carried out his duty for two thousand years and never faltered once. Until he meets Nicole St. James.  When the moment of death comes, Keenan hesitates, and instead of taking Nicole, Keenan touches the vampire who’s attacking her.

Cast out of heaven for disobedience, Keenan plummets to earth. Six months later, he finally manages to track Nicole to a bar in Mexico. He’s stunned to discover that the woman he remembers has undergone a dramatic change—she’s become a vampire. And when he realizes that she’s the target of all manner of enemies—other vampires, demons, even shifters—he’ll do whatever it takes to protect her, even if all hell breaks loose…

He’d been created for one purpose—death.  He was not there to comfort or to enlighten.

Keenan’s only job was to bring death to those unlucky enough to know his touch.

And on the cold, windy New Orleans night, his latest victim was in sight.  He watched her from his perch high atop the St. Louis Cathedral. Mortal eyes wouldn’t find him. Only those preparing to leave the earthly realm could ever glimpse his face so he didn’t worry about shocking those few humans who straggled through the nearby square.

No, he worried about nothing. No one. He never had. He simply touched and he killed and he waited for his next victim.

The woman he watched tonight was small, with long, black hair, and skin a pale cream.  The wind whipped her hair back, jerking it away from her face as she hurried down the stone cathedral steps.  The doors had been locked. She hadn’t made it inside.  No chance to pray.

He slipped to the side of the cathedral, still watching her as she edged down the narrow alley way.  Pirate’s Alley.  He’d taken others from this place before.  The path seemed to scream with the memories of the past.

That wasn’t the past screaming.  His body stiffened.  His wings beat at the air around him. It was her.

A woman who was dying tonight.

His eyes narrowed as he leapt from his perch.  Time to go in closer.

Nicole’s attacker had her against the wall. One of the man’s hands was over her mouth, the better to make sure she didn’t scream again.  His other hand slammed against the front of her chest and held her pinned against the cold stone wall.

She was fighting harder than Keenan had really expected.  Struggling. Kicking.

And Keenan watched—as he’d always watched. So many years…

The man holding her leaned in and licked them away.

Keenan’s gut clenched.  Knowing that her time was at hand, he’d watched Nicole for a few weeks now.  He’d slipped into her classroom and listened to the soft drawl of her voice.  He’d watched as her lips curled into a smile and a dimple winked in her right cheek.

Now, her green eyes were filled with the stark, wild terror that only the helpless can truly know.

He didn’t like that look in her eyes. His hands clenched.

Don’t look if you don’t like it. His gaze jerked away from her face.  The job wasn’t about what he liked.  It never had been.

There’d never been a choice.

They have the choices. I only have orders to follow.

That was way it had always been.  So why did it bother him, now?  Because it was her? Because he’d watched too much? Slipped beside her too much?

“This is gonna hurt…”

The man’s grating whisper scratched through Keenan’s mind. Neither the attacker nor Nicole could see him.  Not yet.

One touch, that was all it would take.

But the time hadn’t come for her yet.

“The wind’s so loud…” The man lifted his hand off Nicole’s mouth. “No one’s gonna hear you scream anyway.”

Keenan truly hadn’t realized she’d struggle so much against death.  Some didn’t fight at all when the time came. Others fought until he had to drag them away.

Fabric ripped. Tore.  The guy had jerked her shirt, rending the material. Keenan glimpsed the soft ivory of her bra and the firm mounds of her breasts.

Help her. The urge came from deep within, but it was an urge he couldn’t heed.

Her attacker lifted his head. Keenan stared at him, noting the gaunt features, the black hair, and the eyes that were too dark for a normal man.  “No, baby. I’m not lettin’ you go.”  The guy licked his lips. “I’m too damn hungry.” Then he smiled and  revealed sharpened teeth that no human could possess.

Vampire. Figured. Keenan had been cleaning up their messes for centuries. A mistake. That’s what all those parasites were. An experiment gone wrong.

Nicole opened her mouth to scream again and the vamp sank his teeth into her throat. Then he started drinking from her, gulping and growling and Nicole’s fingernails raked against his face as she struggled against him.

But it was too late to fight.  She’d never be strong enough to break away from the vampire. She was five feet six inches tall. Maybe one hundred thirty five pounds.

The vamp was over six feet. He was lean, but muscle mass and weight didn’t really matter—not when you were talking about a vamp’s strength.

Keenan stared at the narrow opening of the alley. Soon, he’d be able to touch her and her nightmare would end.  Soon.

“You’re just going to stand there?” Her voice cracked.

His head whipped back toward her.  Those green eyes—fury and fear—were locked on him.

She shouldn’t see me yet. It wasn’t time.  The vamp hadn’t taken enough blood from her.

Nicole shoved her hands into the vampire’s chest, but he kept his teeth in her throat and didn’t so much as stumble. Her neck was tilted back, her head angled, and her stare was on—

“Help me.” She mouthed the words as tears slipped down her cheeks. “Please.”

She could see him.  Every muscle in Keenan’s body went tight. “I will.”

“Cynthia Eden’s Angel of Darkness is the perfect blend of red-hot sex and supernatural suspense driven by a rockin’ plot. Pick up Ms. Eden’s book today and be just like me—waiting in breathless anticipation for another story in her highly innovative Other universe.”–Victoria of TwoLips Reviews

“Cynthia Eden has quickly become one of my favorite adult paranormal authors and Angel of Darkness just reaffirms why I love her books so much! It was filled with all the elements we have come to expect from her, fast paced action, intriguing mythology and an alluring romance that will leave you craving more.”–A Bookworm’s Haven

“Eden’s angels are as flawed and compelling as the humans they tend, and in ANGEL OF DARKNESS we get just the first glimpse of how every one’s world is changing. Eden’s mythology has nuances and secrets that I’m eager to explore further alongside her characters. Visceral and violent, The Fallen series has introduced a new breed of angel that has their feet planted firmly in a dark world so hauntingly similar to our own.”–Julia of All Things Urban Fantasy