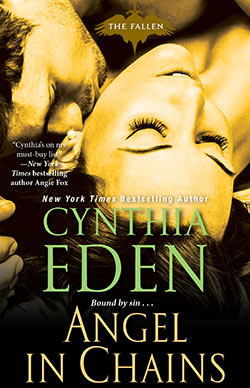 As a fallen Angel of Death, Azrael is cursed to walk the earth alone in search of redemption. One night, as he wanders the streets of New Orleans, he discovers a woman surrounded by panther shifters.  No longer able to contain the anger simmering within, Az summons his dark powers and attacks, determined to protect this innocent human from certain death.

Only Jade Pierce is no delicate flower.  She’s spent years learning to survive and fight the evil forces sent by her ex-lover who refuses to let her go. But after seeing Az in action, she figures she could use a little supernatural help. And so she plans a course of seduction guaranteed to arouse his interest and his angelic passions…

**Unedited Excerpt from ANGEL IN CHAINS**

“They’re probably hunting you now.” He walked away from her and headed toward the window that looked out over the street. “Hunting us,” he added quietly and realized he was anticipating the fight. When had he come to crave the fury? When had the bloodlust grown so within him?

She stood as still as a statue before his door. Her hand was up, hovering above the doorknob, and he could almost feel the fear rolling off her in waves.

But then she took a deep breath, and he saw her small shoulders straighten. She shoved back the heavy tangle of her hair and turned to face him. “How did you get us away from them?”

Amusement flared in him.  “I did notice the claws.” Rather hard to miss those.

She blinked, and her eyes narrowed as she studied him. He’d never seen quite that shade of green before. She crept closer, bringing that light scent of strawberries to him. When she stopped, she was less than a foot away from him. It would be so easy to touch her.

Though he knew well just how dangerous a touch could be.

Yet she stood close enough to kiss. But angels weren’t supposed to kiss mortals . . .

You’re not an angel anymore. The whisper came from deep inside of him. The same tempting whisper that he’d been fighting since his fall.

You’re not an angel. Do what you want.

You’re not an angel. Take what you want.

He was discovering that he could want many things.

The top of the woman’s head barely reached his shoulders. She tilted her head and stared up at him. Then her gaze swept down his body.

Az stiffened even before she whispered, “What are you?”

Rather insulting question. “I’m the man who saved your life.” Did she need to know more? He didn’t think so.

Her hand lifted and pressed against her mouth. A small trace of blood still rested near her lips. “There were three of them, and, you’re big and all, but there’s still just one of you.”

She might just be one of the most ungrateful humans he’d ever encountered. Stifling a sigh, Az inclined his head. “You’re welcome.”

She stared in surprise for a moment. Then she laughed. A soft, strangely lyrical sound spilled from her lips, and her wide smile lit up her face.

Az tensed as the wave of need hit him. Not lust for blood or death. This time . . .  the lust was just for her.

You’re not an angel anymore. Take what you want.

“Yeah,” she said, as her laughter faded but the smile still lingered on her lips, “thanks for saving my ass.” Then she held out her hand to him. “My name’s Jade. Jade Pierce.”

He stared at her hand. She wiggled her fingers at him. Slowly, Az lifted his own hand and caught those wiggling fingers. Soft. “I am Azrael.” He dropped her hand. He hadn’t used the name Azrael in centuries. “Most just call me Az.”

“Well, Az, it’s a pleasure to meet you.” Her gaze slid over his body again. “But I’m gonna have to ask, once more, just what are—”

The door crashed in behind her. She didn’t scream this time, but maybe Az just didn’t give her a chance to scream.

Because as the three black panthers—fully shifted panthers—leapt into the room, jumping over the broken door, Az grabbed Jade and threw her toward the couch.

Then he ran right for the snarling beasts.

He should have known better than to let down his guard. Shifters and their damn acute senses. They’d caught his scent, her scent, and followed them right through the Quarter.

“I warned you,” Az snapped and leapt at the nearest panther. He caught the beast’s front paws and shoved the giant cat back. “You should have listened.” There would be no more warnings now. Only death.

“Eden is a master of suspenseful paranormal romance, and her Fallen series is full of sexy alpha angels, all ready to sin for the right woman. Az and Jade’s chemistry is practically combustible, beginning in lust and growing toward love. And with fast-paced action, readers are in for a wicked ride.”  –RT BookReviews, 4 Stars