Something New…THE BETTER TO BITE (With Giveaway) Back to Blog

Posted in Romance on October 4th, 2012 by Cynthia Eden

Update: Thank you all SO much for sharing your stories with me!  You had me fighting the urge to try the Bloody Mary routine once more. 😉 I randomly picked a winner, and that commenter is…latisha depoortere. Congrats!!!  (Psst..more contests are coming soon!)

I’m very excited about a new book that I hope to release very soon (it’s October–come on, I HAD to release a paranormal during this spooky month!).  Here’s the cover for the book: 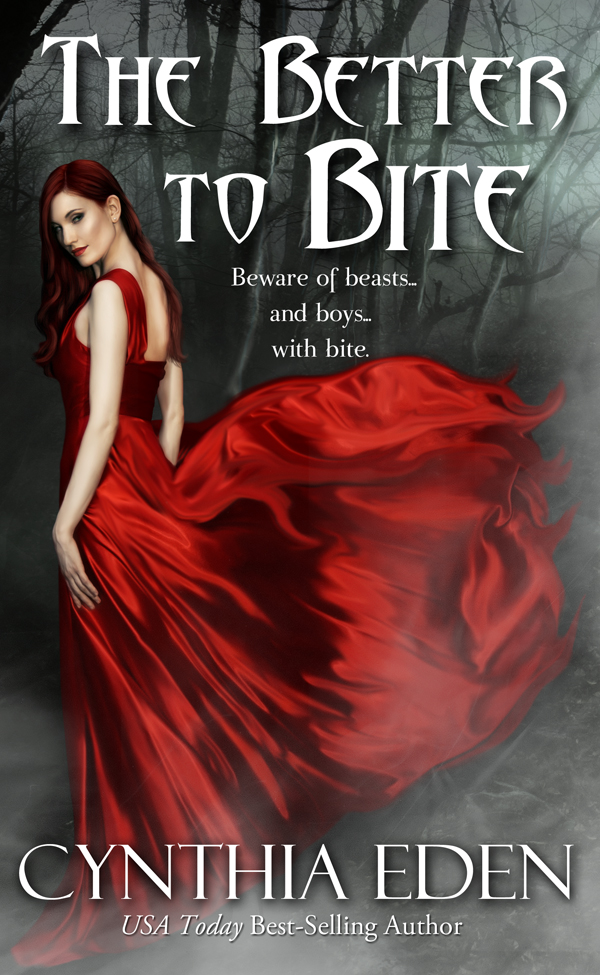 And here’s the blurb:

Don’t go into the woods.

Sixteen-year-old Anna Lambert knows that the woods near her new home aren’t safe. She’s seen the wolves that stalk through that dark forest, but Anna doesn’t scare easily.

Anna is cursed–or gifted, depending on how you look at it–with the ability to find anyone or anything that is lost. So when folks start disappearing in the small town of Haven, Anna’s father, the sheriff, has to use her special skills as they begin to hunt for a killer.

But the killer isn’t exactly human. As Anna is pulled deeper into the secrets of Haven–a town that is truly cursed–she finds herself falling for two, equally mysterious boys. With the danger closing in, one of those boys may just turn out to be her savior. And the other? He could be a very big, very bad…beast.

As I wrote THE BETTER TO BITE, I thought of it as Veronica Mars meets Little Red Riding Hood–with werewolves.  I had such an incredible time writing this story, and I’m crossing my fingers and hoping that readers enjoy it, too.

And just because I’m releasing a YA novel, it does not mean that I won’t be writing adult stories, too. I promise, I’m definitely still doing them! Actually, I’m working to have an adult paranormal romance come out in just a few weeks, too, and then I have a December release with Kensington Brava (ANGEL IN CHAINS)…and in 2013, well, I’ve got at least 7 adult releases scheduled.  I love writing–and I love to write in several areas, so no worries on that score.

I will be planning some giveaways  with THE BETTER TO BITE, and as soon as the book is available, I will be back to spread the word.  In the meantime…since it is the Halloween season, why don’t we do a giveaway today?  I’ll give a $15 Amazon gift card to one commenter. You just tell me…what’s your favorite spooky ghost story to tell around Halloween?  My heroine, Anna, in THE BETTER TO BITE, sure does enjoy spooky tales. And so do I!  I’ll pick the random winner on 10/6 at noon (Central time). Good luck!!!

(And I’d like to send out a big thank you to my wonderful cover artist, Pickyme!)

This entry was posted on Thursday, October 4th, 2012 at 8:41 am and is filed under Romance. You can follow any comments to this entry through the RSS feed. Both comments and pings are currently closed.

54 responses to “Something New…THE BETTER TO BITE (With Giveaway)”