Posted by: Jessa Slade
Currently working on: Revisions on Book 3
Mood: In praise of gritted teeth

Hello, Cynthia and friends!  Thanks so much for letting me come enjoy your Deadly Days of Summer.  And may I say that once again, your heroes for I’LL BE SLAYING YOU and DEADLY FEAR are looking hot, hot, hot!  Just right for the season 🙂

I’m glad to take this break from launching the second book of my Marked Souls series (FORGED OF SHADOWS June 2010) and revising the third book (VOWED IN SHADOWS April 2011) because I’ve been having a little trouble lately.  Well, not a little trouble.  Actually, about 6’4″ of muscular, brooding, smug trouble.

And to make matters worse, he’s not even a hero I’m supposed to be writing! 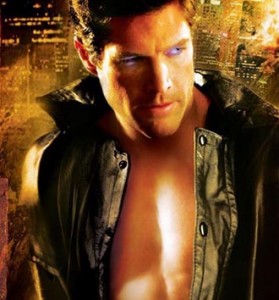 The hero of the first Marked Souls book, SEDUCED BY SHADOWS, was Ferris Archer.  He was quite the Southern gentleman.  Well, okay, he was an angry, wounded, marginally suicidal alpha warrior.  But still.  He is intense and driven, but coldly clear, like a river of glacial run-off that lures you in with its crystal beauty… only to sweep you away with down-the-mountain speed

He wasn’t always easy to write, but I felt I knew him, and he knew himself.  Didn’t always like himself, but he was a man of principle and action. 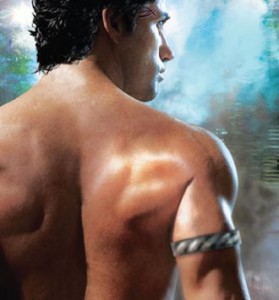 The hero of the second Marked Souls book is Liam Niall.  He was more conflicted than Archer. Liam has more doubts, more responsibilities, and a softer heart despite his old life as a blacksmith and now as leader of the Chicago league of demon-possessed warriors.

But he is a man of deep yearnings, and once I found his desire to share his life, he also wanted to share his story with me.

I don’t have a cover for my third hero yet.  I imagine somewhere in New York City, a graphic designer is cursing me because my Book 3 hero suffered an, um, accidental maiming in Book 2 that might be hard to portray on the cover.  But he too has been a fine hero to write.  Finer than most, actually, because at his core he is a righteous man, with a steady, unwavering light in his soul that just needed a little judicious fanning.

So where’s my problem, you ask?  There’s another man, another warrior in the Chicago league that several readers have asked about already, even though I only have two books out.  They want to know, which one is Ecco’s book?

Oh geez.  Ecco isn’t a hero.  At least, I never meant him to be.  I have this series all plotted out, you know.  I plan to write nine books (God, publisher and readers willing! — not necessarily in that order) and none of those books, according to my handy-dandy Excel spreadsheet, shows Ecco as a hero.

Why not?  Well, here’s a little excerpt of why not, taken from SEDUCED BY SHADOWS, where the heroine, Sera, is assigned supply chain duties with the talyan warriors Zane and Ecco:

When it came to snacking, Sera discovered the terrible talyan junk food habit that filled up cart after cart.  When Ecco groused about the length of the checkout line and the lack of good magazines, she just about lost it.

“Then quit eating so many doughnuts.”

“I’m supposed to save the world on yogurt and baby carrots?”  He looked appalled.  “Must be a woman thing.”

He crossed his arms.  “And shirk my duty, risking my soul?   Assuming Archer didn’t just shred me for compost.”

“Then I’ll wait for you.”  She marched for the door.

“Go with her,” Zane said softly to Ecco, as if she might explode if he jostled her with loud words.  “I’ll finish here.”

She plunked herself down in the driver’s seat and stared at the first flakes of snow whipped in the wind.

Ecco disappeared into the back.  After a few minutes, he cleared his throat.  “Do you think you and Archer are compatible outside the bedroom?”

She glared into the rearview mirror.  “Excuse me?”

“Does he listen to your dreams?  Do you like his friends?  You’re a cute couple and all, but that trick you did together with the malice in Bookie’s lab seemed a little kinky as the basis for a long and loving relationship.”

She twisted around.  “Are you smoking something back there?”

“You gotta have things in common besides the zing, you know?”

Before she could answer, Zane emerged with his conga line of shopping carts.   Zane shot Ecco a hard look.  “Why’d you let her drive?”

“I had my magazine.”  Ecco waved the glossy pages with the voluptuous brunette on the cover promising “Ten Ways HE Can Please YOU In Bed.”

See?  What do you do with a “hero” like that?  Didn’t he sound kind of serious about wanting a deeper relationship than sex?  But what kind of hero eats only doughnuts?

Ecco is opaque to me.  He originally stepped onto the stage to say things the other characters wouldn’t say aloud.  And he says them in an honest-to-the-point-of-rude way.  But I suspect he’s hiding something from me, some damage that he’d never, ever, in a thousand years share.  Those heroes are trouble.

Besides, what sort of heroine would put up with a man taking her magazines?

And yet…  He keeps teasing me.  I even have a hint what he looks like.  Kinda like this: 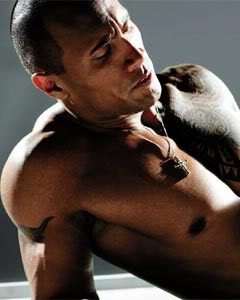 Oh man, really?  You’re kidding me.  The Rock?  What am I supposed to do with that?  I don’t know…  What do you think?  What does one do with a maybe hero?  Do we redeem him?  Kill him horrifically?  Give him his own Twitter account and hope he doesn’t get us arrested?  Who are your favorite heroes who you didn’t think could ever be heroic?

Leave an answer in comments and two random readers will win a copy of either Archer’s chest or Liam’s butt, your choice.  Heck, if we got man chest on Book 1 and man behind on Book 2, what’ll be on the cover of Book 3?!

This entry was posted on Thursday, June 10th, 2010 at 12:05 am and is filed under Romance. You can follow any comments to this entry through the RSS feed. Both comments and pings are currently closed.

Kiss Me This Christmas
A Steamy Holiday Romance