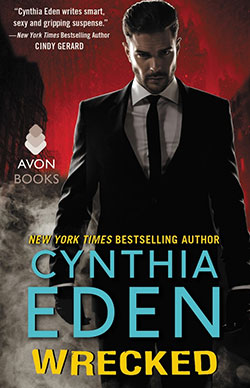 SHE LEFT HIM ONCE.

LOST Agent Ana Young was only fourteen when she was abducted by a madman, but unlike many kidnapping victims, she did go home. Now, her mission is to find the missing. But her new case has her on the hunt for the escaped convict who’s obsessed with her. And Ana has an unlikely partner—the sexy, supposedly-by-the-book FBI agent she had one amazing night with and had to forget.

FBI Special Agent Cash Knox knows that Ana, the petite, tough-ass former bounty hunter, can get the job done again. But this time, someone else leads them to “Bernie-the-Butcher,” someone who’s been watching Ana. Waiting for her.

FROM A CRAZED KILLER.

Now, catching a deranged murderer means Ana must trust her guarded heart to the gorgeous, complicated G-man she wasn’t supposed to fall for.

“Your boss gave you the company jet,” Cash murmured as he sat across from Ana—in one very plush company jet. “You must have a lot of pull with him.” And, yeah, that was jealousy twisting his guts up but he couldn’t help it.

At his words, Ana stopped looking at the clouds outside of her window and her head turned toward him. When she locked her dark gaze on him, Cash felt that stare like a punch straight to his gut. Ana wasn’t the kind of woman that a guy forgot, though Cash had sure as hell tried to put their night behind him.

She was the kind of woman who could wreck a man.

“If you have a question about my relationship with Gabe,” Ana said, her voice clear and easy, “then ask. But don’t make snide-ass comments that are only going to piss me off, okay?”

That was Ana. Straight to the point. A woman who didn’t play games. He could sure respect that. “Are you involved with him?”

“Am I sleeping with my boss? No. He’s married, actually. Quite happily.” Her lips kicked up into a quick smile. “To a former client.”

His gaze darted to her lips. Her lips were truly incredible—red and full. And her scar shouldn’t have been sexy. Cash hated that Ana had been hurt. Hated that she was scarred in any way. If he’d had his way, she would have never known a moment of pain or fear.

Ana had a habit of lightly licking the faint line of her scar when she was in deep thought. A quick swipe of her pink tongue across her top lip.

Not that she knew it. Not that he’d tell her. It had been two years, for fuck’s sake. He’d moved the hell on. And even if Ana wasn’t sleeping with her boss, a woman like her would sure be sleeping with someone.

Whoever the guy was . . . he was one lucky bastard.

“What about you, Agent Knox?”

His brows rose. Since when was he Agent Knox?

“You involved with someone?” Her gaze dipped to his left hand. “I don’t see a ring, but that doesn’t mean anything. You certainly strike me as the marrying kind.”

He flexed his fingers. “Not involved. Definitely not married.” But her words were nagging. “What do you mean about me being the marrying kind?”

She waved her hand toward him. “Oh, you know.”

He had no clue.

“You’re the true-blue type. The white knight. So I just figured you’d have a white picket fence and an adoring family waiting for you by now.” Sadness flickered in her eyes, just for a moment. “I rather wanted that for you.”

Wait, what? “Ana Young,” he said, rasping out her name. “You confuse the hell out of me.”

Her long lashes fell, casting shadows against her cheeks.

“So . . . are we going to talk about it at all?” Cash drawled, aware that his Texas accent had just slipped out. Ana had grown up in Texas, too, though she’d certainly never talked to him about her life. Not that they’d done a whole lot of talking when they’d known each other before.

Her lashes slowly lifted. Her gaze swept over his face. “You look the same.” Her head tilted a bit as she studied him. “Though the stubble is new. Kind of gives you a rough edge.” She paused. “I like it.”

“As far as talking about ‘it’ . . . I’m assuming you mean the case? Because we really don’t have anything else to talk about.”

That was cold and clear. And Cash found himself smiling. “You seem the same, too.” Direct. Sexy as all hell. But . . . “Prettier, though. How is that possible? How do you get better with time?”

She stared back at him. Her eyes were so dark, but he could see the gold hidden in their depths. That gold had ignited when he’d been inside of her and she’d been coming for him.

Focus on the case, man!

Because he wasn’t there for a walk down memory lane. He was with Ana because she truly was the best.

So maybe I lied to Ana a bit. He lied to people all the time, and they had no clue. Ana had just said he was the white knight type.

That was hilarious. He was as far from a white knight as it was possible to be.