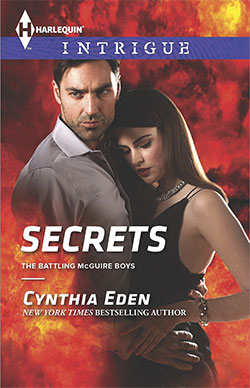 In a world of lies, he’s the only man she can trust

Navy SEAL Brodie McGuire’s orders were clear: Get the hostage out alive. After spiriting Jennifer Wesley to safety, their terror and need ignited into passion. Mission over, haunted by memories of their night together, Brodie didn’t expect to see the Louisiana society girl again. Then she showed up at McGuire Securities.

Six years ago, Brodie saved Jennifer’s life. Now she needs his protection again. But he has no idea who she really is. On his family’s Texas ranch, attraction flares, taking them over the edge. As Jennifer’s violent past explodes in the present, she has to find a way to earn Brodie’s trust before her deadly secrets get them both killed.

A ghost from his past had just walked right through his office door. Brodie McGuire shook his head, an instinctive response, because he could not be seeing that woman. There was no way she was standing there. No way.

Usually she only appeared in his dreams.

She couldn’t have just walked into his office at McGuire Securities. She was far away, some place safe and no doubt with—

“We have a walk-in appointment that I was hoping you could handle,” Brodie’s older brother, Grant, told him. “This is Jennifer—”

“Wesley,” Brodie finished, then cleared his throat because that one word had sounded like a growl.

Grant’s brows climbed. “You two know each other?”

Yes, they did. Intimately.

“Well, that just makes things easier.” Grant flashed a broad smile. “Ms. Wesley, I will leave you in my brother’s capable hands.”

Brodie realized that he’d leaped to his feet as soon as he’d gotten a look at Jennifer.

Grant glanced over at him, a faint frown on his face.

Brodie offered what he hoped was a reassuring smile as he hurried around his desk and toward Jennifer.

Grant hesitated a moment more; then he slipped from the office. The door shut quietly behind him, and, just like that, Brodie was alone with the woman who’d been in his dreams for far too long.

Brodie almost reached out and touched Jennifer, just to make sure she was really there, but then he remembered the way desire had burned so hot and wild between them before.

To play it safe, he tucked his hands in his pockets and just inclined his head toward her. “Been a long time, Ms. Wesley.” He was impressed that his voice came out sounding so calm.

Her laughter sounded the way he’d thought it would. Sweet, light, musical. She hadn’t laughed when they’d been together in the Middle East. She’d been far too afraid for laughter. He’d hated her fear, and he was damn glad to see her like this…happy.

“And here I was worried you wouldn’t remember me,” she murmured. Her smile flashed, a wide, slow smile that made her deep brown eyes light up. “But I really think you can drop the ‘Ms. Wesley’ part, don’t you?”

She fit against him, perfectly so. He’d thought that before, on that long-ago night.

Jennifer eased back and stared up at him. “You haven’t changed. You look exactly the same, even after all this time.”

He’d changed plenty. Most of those changes were on the inside, though, because he was good at keeping his mask in place. Brodie forced himself to let her go, when he wanted to hold on to her tightly.

That part hasn’t changed, either.