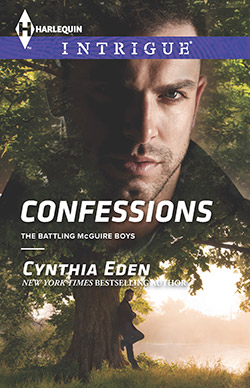 Desperate to prove she’s being framed for murder, Scarlett Stone entrusts her reputation—and her life—to the man who once broke her heart. Grant McGuire, a sexy former army ranger turned detective, has never been the same since military action. But behind his cold demeanor, he still burns for Scarlett.

Taking her case is an easy but dangerous decision for Grant. Together they must race against the clock to find the real killer, who now wants them both dead. More dangerous, however, is their sudden, reignited passion. Grant will do anything for a second chance with Scarlett…while she’ll do everything to keep the secret she never wants him to know…

Grant McGuire was heading out of the place, more than ready to go meet his brothers at a local bar in Austin, Texas. It had been one hell of a week, and he needed to let off some steam.

So when he opened his office door and stepped into the lobby, he thought the place would be deserted.

A woman was there. She stood just two feet away, as if she’d just entered the lobby and had been making her way directly to see him. Her blond hair was pulled away from her face, secured in a little twist at her nape. Her eyes—dark, wide, deep—flared when she saw him.

And the world seemed to stop for Grant.

Without speaking, he drank her in. His gaze swept over her face. The soft curve of her cheeks, the delicate jaw, the light sprinkling of freckles across her nose. Scarlett had always hated those freckles, but he’d loved them. Had wanted to kiss every single—

“Grant? Um, do you…do you remember me?” Her voice was halting.

As if he could ever forget her. The woman starred in pretty much every fantasy he’d ever had.

She’d changed over the years. She wasn’t wearing dusty jeans and a loose T-shirt like she’d favored back in her high school days. She was dressed in black—expensively cut pants and a close-fitting turtleneck. Her feet were encased in high heels—red heels that made him think of sex.

“Uh…” Pink flashed across her cheeks as she seemed to decide that no, he didn’t remember her. “I’m Scarlett… Scarlett Stone.”

A growl built in his throat. “I damn well know who you are.” Had he really just been staring at her like a lovesick fool? But… Scarlett shouldn’t be here. She should be far away from him. Safely away.

He’d made the sacrifice before. Done the right thing by her. So why was she back? In his office?

He glanced over her shoulder, his focus shifting to the McGuire Securities entrance. “How did you get in here?” He’d thought the place was locked up.

“Your assistant met me. She was leaving when I was arriving. She told me that you were still here.” Scarlett’s hands clenched around the small black bag that she carried. “Can we…can we go inside your office to talk?”

The tremble in her voice pierced right through him. Scarlett’s voice had shaken like that before. When she was scared, it was a dead giveaway to her emotions. Grant backed into his office, holding the door open for her. When she passed by him, he caught her scent—vanilla.

Did she know that he couldn’t smell vanilla without thinking of her?

He pulled in a deep breath, took in more of her delectable scent, and made sure his mask was in place. The mask he’d always tried to wear around her.

Ten years… He should have gotten over her by now.

“Have a seat,” he told her as he turned on more lights and then shut the door.

Scarlett slowly settled into a chair across from his desk. She looked so polished and perfect. Not like the young girl who’d always had her hair streaming over her shoulders and a smile on her face. A smile for him, anyway. A smile that had lit her dark eyes and made—

“Do you recall what you told me? The last time we were—were together?” She fumbled a bit over those words.

He didn’t sit behind the desk. He leaned in front of it, positioning his body a few feet from Scarlett. “I’m afraid you’re going to have to be more specific for me.” He kept his voice controlled. “It’s been ten years.” Ten years, and wasn’t she supposed to be married? His gaze darted to her left hand. No ring.

But she’d been scheduled to get married two months ago. He knew she had. To a lawyer named Eric Turner.

Grant might not be in Scarlett’s life, but he kept tabs on her.

But he’d been out of town for the past few weeks working on a case. He’d just gotten back to Austin last night, and he didn’t know if he was staring at a married woman…or a single one.

“More specific?” Her fingers were white around that black bag. “Right.” She cleared her throat. “Okay, you said that if I ever needed you, you’d be there for me.” Her gaze held his, and was full of hope. “Now do you remember?”

He’d always been afraid that her eyes could see into his soul. See straight into the darkness that lurked there. “Yes, I remember.” He remembered that he’d always been willing to do anything for her.

Scarlett’s breath whispered out. “Good. Because, Grant, I’m going to have to call you on that promise.”

He frowned at her.

“I need you,” she told him as she wet her lips. “I’m desperate, and without your help…I don’t know what’s going to happen.” She glanced over her shoulder, her nervous stare darting to the door.

“Scarlett?” Her fear was palpable, and it made his muscles tense.

“They’ll be coming for me soon. I only have a few minutes, and please, please stick to your promise. No matter what they say.”

He shot away from his desk, his relaxed pose forgotten as he realized that Scarlett wasn’t just afraid. She was terrified. “Who’s coming?”

He stepped toward her, touched her and felt the jolt slide all the way through him. Ten years…ten years… and it was still there. The awareness. The need.

Did she feel it, too?

Focus. “Slow down,” Grant told her, trying to keep his voice level and calm. “Just take it easy. You’re safe here.” With me.

But that wasn’t exactly true. She was in the most danger when she was with him. Only Scarlett had never realized that fact.

“Say you’ll help me,” she pleaded. Her tone was desperate. She had a soft voice, one that was perfect for whispering in the dark. A voice that had tempted a boy…and sure as hell made the man he’d become think sinful thoughts.

“I’ll help you,” Grant heard himself say instantly. So he still had the same problem—he couldn’t deny her anything.

Her shoulders sagged in apparent relief. “You’ve changed.” Then her hand rose. Her fingers skimmed over his jaw, rasping against the five o’clock shadow that roughened his face. They were so close right then. And memories collided between them.

When she’d been eighteen, he’d always been so careful with her. He’d had to maintain his control at every moment. But that control had broken one summer night, weeks after her eighteenth birthday.

I can still feel her around me.

She wasn’t eighteen any longer. And his control—

He heard voices then, coming from the lobby. “Keep your promise,” Scarlett said.

He pulled away from her and walked toward the door. Those voices were louder now. Because they were. shouting for Scarlett?

“They were behind me.” Her words rushed out. “I knew they were closing in, but I wanted to get to you.”

He hated the fear in her voice. “You’re safe.”

Grant opened his office door. Two men were in the lobby. One wore a suit—expensive, well cut. The other was wearing a faded leather jacket and had a badge clipped to his belt.

Why is a cop looking for Scarlett? And it wasn’t just any cop. Grant recognized Shayne Townsend because he and the detective had worked a few cases in the past.

The guy in the suit narrowed his eyes on him. “Who are you?”

Grant’s brows rose. He sure didn’t like that arrogant, demanding tone. “Grant McGuire. This is my business you’re in.”

Shayne looked over Grant’s shoulder. His eyes narrowed and Grant knew he had spied Scarlett. “Ms. Stone,” the detective murmured, his face determined. “You need to come with us.”

Us? Was the other guy a cop, too? Because Grant didn’t recognize him.

But when the suit advanced, Grant braced his legs apart and gave the guy a go-to-hell stare. “She doesn’t need to go anyplace. But you two…unless you have some sort of reason for being on my property, a warrant—”

“We’re here for Scarlett,” the suit said. His blue eyes were blazing with fury. “You can’t run anymore, Scarlett.”

She had been running.

Shayne pulled out a pair of handcuffs. “Scarlett Stone…” His voice was heavy, emotionless. Grant knew the detective tried to never let emotion influence him on the job. “You’re under arrest.”