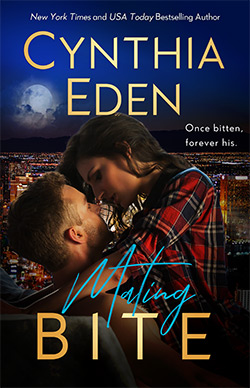 Werewolf Carter Sinclair is on the hunt. He’s tracking a newly turned vamp, a beauty with bite named Lauren McIntosh. Hunting her is the easy part. After all, no one can hide from a wolf. But once Carter gets the vamp in his arms, his easy mission suddenly goes straight to hell.

One taste, one bite that should never have happened…and Carter is hooked—mind, body, soul. Nature has plans for him and Lauren. They’re to be mates, but a vicious vamp is waiting in the dark—a killer who has already claimed Lauren as his.

Now Carter has a new mission—keep Lauren safe at all costs. Make her fall for him. And hide all of the very dark and dangerous secrets that fill his closet. He needs Lauren to trust him, he needs her to stay with him, and the last thing he wants is for Lauren to know just how deeply he’s already betrayed her. What she never knows can’t hurt her, right?

Their mating is forbidden, but Carter is about to break every werewolf and vamp rule out there in order to claim Lauren. And those fools who try to get in his way will find out just how deadly his beast can truly be…because there is no one in the world more important to a wolf…than his mate.

She fiddled with her seatbelt. It had been nice of him to secure it for her. “You, uh, I bit you.”

“Hell, yes, you did.” His eyes were on the road. “I can still feel the bite on me,” he added, voice deepening even more. “It’s like a brand on my skin.”

Lauren winced. Some of her control was coming back—a bit—and she was pretty sure it was because of his powerful blood. She’d never felt this way after drinking. Every cell in her body felt alive.  No, not just alive. Amped. “Sorry about that. I’m new at this vamp business, and I…may have been a little too rough.”

He slanted her a quick glance. “I like rough.”

His hands tightened on the wheel. “Told you already, Carter Sinclair. If you’d come back to me at that bar like you were supposed to, then none of this would have happened.” His jaw hardened. “You wouldn’t have gotten stabbed right in front of me, and I wouldn’t have started a new war.”

Um, a new war?  That was kind of dramatic, but she’d circle back to that part, later. For the moment… “Why aren’t you freaking out?”

“Don’t really have time for that, do we?” He glanced in the rear-view mirror. “They’re going to follow us. They aren’t going to let either of us just vanish.”

“Why aren’t you freaking out?” Lauren demanded again. “I’m a vampire! You get that, right?”

“Hard to miss when you sink those sexy fangs into my throat.”

“You should be freaking out.  You should be running from me.” She blinked because tears had muddied her vision. “Or maybe you should be the one trying to take my head.” Her hand rose to her neck. “I think that’s what she was doing—not stabbing me, but trying to cut my head straight off.”

He growled. The sound was dark and animalistic, and it sent a shiver over her.

“No one,” he said, the words rasping from him, “is taking your head. I’m not going to let that happen.”

“You’re…helping me?”  He was—obviously. That was why they were racing away in a stolen truck, and he’d gotten her out of that alley.  “Why?”

He took a hard turn. Didn’t even slow as he took that turn, and her body slid in the seat.

“All these questions,” he murmured. “Shouldn’t you just be glad I saved your ass?”

No, because there was a price for everything. She knew that. She also knew that fear had settled heavily in her gut. He was so strong—stronger than she was, and that was saying a whole lot. “Are you a vamp?” She held her breath as she waited for his response. Held her breath, but prepared to rip out of the seatbelt and throw her body out of the truck.  If he was a vamp, she’d have to run.

“No damn way,” he added, and there was a note of rage underlying his words—a rage that had her shoulders stiffening right back.

He looked into the rear-view mirror again.

“If you don’t like vamps, why are you helping me?”  Nothing was making sense to her. “I mean, what, is this your deal? You go out of your way to help a stranger who bites you and then you steal a truck and then you—”

“If you don’t want my help, I can stop the truck and let you out right here.”

Her lips snapped together.  The Dealer had been her last option.  She hadn’t realized the witch was going to go all knife crazy on her. “Keep driving,” she urged. “Drive really fast.”

And Lauren…she stopped asking questions. Mostly because she wasn’t sure she was ready to hear any answers from him.