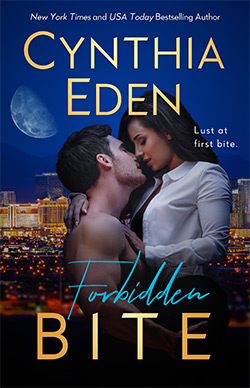 “Don’t look into her eyes. If you do, she’ll take your soul.”

Werewolf Griffin Romeo has new prey—a sexy female vamp named Isabella has been hunting in Sin City, and it’s Griffin’s job to stop her. Tracking Isabella is easy work for an alpha wolf, but once he gets close to gorgeous Isabella…Griffin’s careful plans go straight to hell. Because with one bite, he’s absolutely hooked on her, lost…mated.

Vamps and werewolves are supposed to be sworn enemies. They aren’t supposed to feel a white-hot attraction that burns soul deep. Now that he’s found his mate, Griffin isn’t about to let Isabella go, especially not when he learns that Isabella isn’t the killer who is attacking humans in Vegas. Griffin’s mate has been set-up, and he’ll fight with a wolf’s fury to find the enemy who is working against them both. Someone wants Isabella to be judged guilty by the wolves in Vegas, but Griffin won’t let that happen.

Their mating may be forbidden, but Griffin and Isabella are about to show the paranormal world just how fiercely a vamp and werewolf can fight for each other—because mates bond forever. And nothing will come between them.

Author’s Note: FORBIDDEN BITE is a short, sexy story (32,000 words) about one hot werewolf and his sexy vamp mate. Lust comes first (and fast!) in this tale, and then love is close behind. If you enjoy a hero who will gladly sacrifice everything for his lady, hot times, and a happy ending…then maybe you should take a BITE.

He took a step toward her.

Isabella immediately backed up. “Stay away from me!”

He stilled. “I’m not going to hurt you.”

They were on the side of the bar, on a street that looked empty, and she knew better than to believe his lies. “So says the werewolf.” She licked her lips because they were desert dry.

His gaze immediately fell to her mouth and…heated?

Why was his gaze warming while he stared at her lips?

She threw out her hand and hit the brick wall, steadying herself right before her knees would have buckled.

“You’re…hurt. I smell the blood on you.”

“Right. Yeah. That happens when you jump from a seventh floor window.” Her breath rasped out. “But don’t worry. I’m all healed. No more wounds.” Just weakness. A weakness that will go away when I get a little liquid power in me.

He took a step toward her.

“I’m not a threat to you.” His voice was deep and rumbling, and it seemed to sink right beneath her skin. “And in case you missed it when we met before, my name’s Griffin.”

No, she hadn’t missed it. She hadn’t missed anything about him. Her wrist throbbed. Burned.  That was so weird. The closer he got to her, she could feel his bite actually warming her skin.  “You’re not a threat?” Isabella lifted her chin. “My mistake. I wrongly assumed the guy who tried to stake me before might be dangerous.”

She shivered. Why am I shivering? Growls aren’t sexy. This guy isn’t sexy. He’s probably a werewolf psychopath!

Isabella had no idea what that was supposed to mean. “Just get out of my way, okay? You say you’re no threat. Fine. If that’s the case, then leave. Because I’ve got places to go.” And people to bite.

Instead of leaving, she blinked and the guy was right in front of her. Griffin reached out and his fingers curled beneath her chin. As soon as he touched her, a surge of electricity pulsed through her entire body. She found herself gasping, and—very, very embarrassingly—her nipples hardened. She also realized that rich, woodsy scent that she’d detected moments before? It was coming from him. A wild scent…an oddly, alluring scent.

“Your heart is beating too slowly.”

“You can hear that?” And she’d thought she had good hearing…

Since when was she sweetheart?

“Your breathing is labored, and you’re trembling.”  Griffin lightly stroked her chin with his thumb.  “Why did you jump? Were you so upset by what happened between us that you thought the only alternative was—”

“You’re insane.” Isabella just broke right through his words because she’d come to that important realization—the werewolf is crazy. “I jumped because some assholes with guns broke into my hotel room and tried to kidnap me. The only way to escape happened to be through my window.”

A faint furrow appeared between his brows.

Her gaze dropped to his throat. “What I wouldn’t give for a taste,” she whispered as she stumbled toward him.

Quite a few things happened then…

Footsteps raced toward them.

And bullets blasted into the night.

Isabella opened her mouth, prepared to scream as those bullets sank into her. The assholes had found her. As weak as she was, they were going to take her. She was helpless.

But the werewolf lifted her into his arms and he leapt up into the air. The move was insane, so incredibly fast, and Isabella was sure she felt the heat of the bullets race by her skin—yet those bullets didn’t strike her.