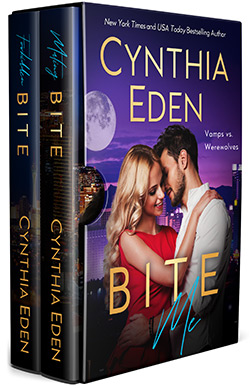 Vamps and werewolves are supposed to be sworn enemies. They aren’t supposed to feel a white-hot attraction that burns soul deep. Lust comes first (and fast!) in these tales, but love is close behind. Are you ready for a bite?

“Don’t look into her eyes. If you do, she’ll take your soul.”

Werewolf Griffin Romeo has new prey—a sexy female vamp named Isabella has been hunting in Sin City, and it’s Griffin’s job to stop her. Tracking Isabella is easy work for an alpha wolf, but once he gets close to gorgeous Isabella…Griffin’s careful plans go straight to hell. Because with one bite, he’s absolutely hooked on her, lost…mated. (Word Count: 32,000)

Werewolf Carter Sinclair is on the hunt. He’s tracking a newly turned vamp, a beauty with bite named Lauren McIntosh. But once Carter gets the vamp in his arms, his easy mission suddenly goes straight to hell. One taste, one bite that should never have happened…and Carter’s whole world changes. Nature has plans for him and Lauren. They’re to be mates, but a vicious vamp is waiting in the dark—a killer who has already claimed Lauren as his. (Word Count: 52,000)