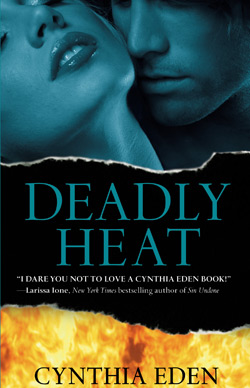 Six months after her lover died in an arsonist’s blaze, firefighter Lora Spade calls in the FBI’s elite Serial Services Division to track the elusive killer. When Special Agent Kenton Lake is lured into a violent inferno, Lora pulls him to safety and is stunned – not by the fire, but by her own searing attraction to Kent. For the first time in months, she longs for something other than vengeance.

Kenton’s interest in Lora should be purely professional. But one fleeting kiss and he can’t get her out of his mind. Her combination of strength and vulnerability makes him want to protect her, and that means solving this case – and fast. For even the passion igniting between them can’t hide a terrifying truth: Lora is the next target in a murderer’s sadistic, fiery game.

Choosing to run into a burning building probably wasn’t the smartest decision he’d ever made. Then again, sadly, it wasn’t his dumbest either.

Kenton Lake choked in a deep breath of air—already tasted the smoke–then lifted his arm over his mouth. Some jobs just sucked.

He went into the wall of smoke. Ah, hell.

His nostrils burned. Heat scored his flesh, but he heard the voice calling, the same voice that had lured him to the building, lured him across the street and into this inferno.

His informer. Upstairs. In the middle of the flames and fury.

He jerked off his jacket, covered his mouth, and tried to stay as low to the floor as he could.

His eyes burned, and the ash and fire singed his nostrils. How the hell had this happened? He was investigating arson, not supposed to get drawn into—

Part of the ceiling fell behind him.

Kenton glared up at the long row of stairs. Ten-to-one odds they’d fall away before he got to the top.

He took the stairs. One. Two. Three.

And, yep, they gave way just when he reached stair number four. Kenton went down, hard. The broken wood bit into his arms and legs, and the fire flew toward him.

A blast of water shot out, hard and fast, slamming into the flames.

Someone grabbed him, hauled him up, and a hand locked tight around his arm. Kenton found himself staring right at a firefighter.

He caught a smoky glimpse of narrowed eyes behind a clear eye shield. Kenton had a fast impression of a thick, black helmet and a brown uniform—

The firefighter shoved him forward, obviously trying to send him toward the front of the building.

More firefighters swarmed around him, battling the fire. Some struck out with axes, some scrambled into the rooms.

Couldn’t they hear the voice calling for help?

He tried to break free and jump for those stairs. There was a gap, he could make it, he might—

The firefighter who’d grabbed him before dragged him right back and gave a hard negative shake of that black helmet.

Screw that, he wasn’t leaving a victim behind—

Then the firefighter slugged him. Hard. Right in his jaw. Damn, one hell of a hit.

Then they dragged his ass out of the flames.

“Idiot!” The snarl came at him the minute the oxygen mask was shoved onto his face. Kenton looked up, gaze narrowed against the smoke that still burned his eyes, and saw the firefighter—the asshole who’d slugged him—jerk off his helmet and mask—

Um, her helmet and mask. Not a man, there. No way.

He swallowed and choked a bit.

He could make out her eyes better now. Gorgeous, shimmering gold, so clear and deep and—

He threw the oxygen mask aside and leapt to his feet. “You left a man in there!”

Those golden eyes widened. Very slowly, she lifted her right hand, a fragile hand that had packed a whole lot of punch, and pointed to the left.

A fire truck ladder was lowering as it moved away from the building. And a man was on the ladder. Older, with stooped shoulders and a soot-stained face. A firefighter had him in a tight grip, and the guy appeared to be coughing up a lung.

“Got him,” she said sweetly, her voice a slow drawl of the south that reminded him of a team mate at the Bureau.

His gaze flew back to her. He looked now, really looked. Short blond hair, wet from sweat and the heat, was molded to her head. Her face was all strong angles, with a sharp, pointed chin. Wide, golden eyes. Cat eyes. Not conventionally pretty. Not really.

But with those full lips, those cut-me cheekbones and, damn, those eyes–sexy.

Her hands were on her hips now. He couldn’t tell a thing about the shape of her body, not in that thick uniform, but she was tall, just a few inches shy of his own six foot three.

Probably long and lean, and he usually liked them a bit softer around the edges and—

“Wanna tell me why you’ve got a death wish, GQ?”

GQ? He glanced down at his ruined suit. Right. So she was funny. Or wanted to be. “I heard…” He coughed and had to pause to clear his throat and breathe. “I heard…him calling for help.” He wouldn’t tell her the guy was his informant, not yet. That was on a need-to-know basis. Bedroom eyes didn’t need to know that yet.

Those eyes. Impressive really. They were so big that he was surprised she’d gotten them to go so mean and small, so fast. “Firefighters fight the flames.” Ice could have dripped from that drawl. Interesting. Ice in a fiery hell. “Not businessmen with a hero complex.”

He rubbed his jaw. It hurt. So did his ego. “You always punch out your victims? That part of your complex?”

She shook her head. “I only punch when the guys are dumb enough to fight help when it comes.”

Ah, now that was the second time she’d insulted his intelligence. He reached into his back pocket. Yanked out his wallet. The leather stuck a bit when he tried to open it, but he shoved his ID toward her. “FBI, sweetheart. I think I know how to handle a dangerous situation.”

She didn’t even glance down. “I think that’s debatable.”

Fresh Fiction: “Cynthia Eden gives us another riveting novel in the second installment of her Deadly series. Old characters return from her first book and new characters emerge as heroes. This romantic suspense is a real page-turner filled with plenty of ‘heat’ and passion you will not want to miss.”

A Romance Review: “Deadly Heat by Cynthia Eden is a fabulous read that will have you turning the pages keeping you up all night because you can’t put the book down. It is a roller coaster ride of emotions for all involved.”  4 1/2