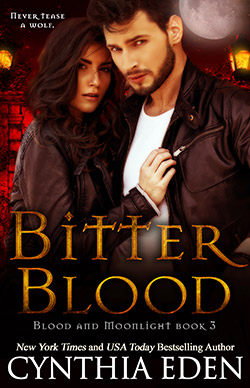 Some bonds go deeper than blood…they go to the very soul.

New Orleans detective Jane Hart is a vampire. She craves blood, has supernatural strength, and when the mood hits her just right, she can grow one killer pair of fangs. She never counted on being a vamp, but she also never counted on falling hard for werewolf alpha Aidan Locke. Now she’s mated to the wolf, and even though she’s living the undead life, Aidan refuses to leave her side.

But Jane is being watched, hunted…tested. And each deadly test that she faces puts Jane—and the people she loves—in the path of a determined killer. She has to find out who is setting her up, before it’s too late. Too late for Jane. Too late for Aidan.

He claimed her…and she obsessed him.

Because now her lover is the one who is changing. Jane’s blood has infected Aidan and the wolf that lives within him is fighting for survival. Each battle…each dark test that their enemy puts in their path…each move slides Aidan closer to the edge. A darkness is growing inside of him. A darkness that is slowly consuming the man he’s been…
And leaving only the monster behind.

When blood and darkness rule, even mates can be torn apart.

In the final book of the BLOOD AND MOONLIGHT trilogy, Jane and Aidan will find out who they can really trust…and who has been waiting to destroy them all along. Are you ready for the end?

The scent of blood hit her—sweet and tempting—and New Orleans Police Detective Mary Jane—just Jane—Hart clenched her teeth as she rushed toward the yawning mouth of a nearby alley. She also prayed that her new fangs wouldn’t decide to burst out right then and there…because that would be bad, very, very bad.

The victim ran toward her and yelled, “He stabbed me! The crazy bastard stabbed me!”

The bleeding victim was young, probably in his early twenties, with bright blond hair and blue eyes. It was dark right then, well after midnight, and the alley was nearly black, but Jane could still see him perfectly.

At least there was one benefit to being a vampire. Excellent night vision.

But that guy is getting way too close to me. Her teeth were aching because the coppery scent of blood flooded her nostrils. “Stop!” Jane ordered as she lifted a hand. “I’m a cop!”

He staggered to a stop. “I need a freaking ambulance!”

Yes, he did. But if he kept coming at her, he was going to get bitten. She didn’t like human blood. Actually, she couldn’t keep it down at all, but her vamp instincts were still kicking in with a vengeance. When fresh blood came running right up to you, well, it was hard to resist a bite.

“Just stay there,” Jane gritted out.

She looked over her shoulder. She’d been walking the street alone, trying to get her damn thoughts together. She wasn’t even on the clock that night. But, no, of course, she would have run into a bloody victim. That was her luck, right?

And helping him is my job, whether I’m on the clock or not. I might be undead now, but I’m still a detective.

“Where is your attacker?” She inched deeper into the alley. Her gun was holstered at her side. With her new vamp strength, she didn’t even need it anymore. Not really.

“B-back there…” His voice stuttered as he glanced over his shoulder. The blood had soaked through his coat.

Her eyes narrowed. The alley was only about six feet wide, but it was long, stretching between the old buildings. She didn’t see anyone back there but…

I can hear him. The faintest rustle of footsteps. The perp was probably hiding, just out of sight. Waiting.

Jane determinedly marched toward her victim. “It’s going to be all right.” Going closer to him meant the smell of that tempting blood just got stronger. Human blood makes you gag. Remember that. It may smell like candy, but you can’t handle that crap. Her gaze slid over him. The blood was all coming from his right shoulder. A stab wound? “The wound isn’t that deep. You’re going to be all right.” A few stitches and he’d be good as new. Provided she got him out of that alley and away from the attacker who could spring again at any moment. “Just stay behind me.” She slid past him and—

“Bitch,” the blond victim whispered. “I know what you are.”

She whirled back to face him.

Too late, she saw him reaching into his coat. The guy didn’t look so scared and hurt any longer. His face was twisted with hate and he was—oh, hell, he was yanking a wooden stake out of his coat!

And she heard the fast rush of footsteps coming from the back of that alley. The guy that she’d thought was the attacker—hell, he must be working with the blond male.

I’m their target. I’m the victim.

Or, at least, that was what they thought. Adrenaline fired her blood and when that stake came slashing toward her heart, Jane grabbed the guy’s wrist in a tight grip, stopping him. “I don’t think so,” Jane whispered. Then she snapped his wrist. One fast jerk. He howled and immediately went down to his knees, clutching his broken wrist desperately.

Jane whirled to face the other threat. “You think you’ll stake me, too?”

The guy coming at her was big, easily over six foot two, and built like a linebacker. He lifted his hand—

She dodged the bullet. Actually freaking dodged it. Jane was still not used to the increased speed she had—moving that way made her feel dizzy, but being dizzy was better than having bullets littering her chest. The guy cried out in fury when he missed her, then he started just firing wildly.

His partner screamed when a bullet hit him. But nothing had touched Jane, not yet.

And she was now close enough to grab the shooter.

She swiped the gun from his hand and threw it against the alley wall. Then she locked her hand around the shooter’s neck and shoved him against that alley wall. He outweighed her by at least one hundred and fifty pounds. He dwarfed her smaller frame but…

He couldn’t get out of her hold. She was stronger. Far stronger than he’d ever be. “Now who is the bitch?” Jane whispered and she flashed her fangs at him.

The bullets slammed into her back, one after the other. Her body jerked, like a puppet on a string, and she spun to see the blond guy on the ground—he’d pulled out a gun from his coat. How many damn weapons did he have hidden in that thing? The blond was still on the ground, the gun still clutched in his shaking hand, and he was preparing to fire at her again. I should have broken both of his wrists. Her mistake.

“Jane!” The roar of her name shook the alley. And she knew the two men who’d come here for her—humans who had made such a terrible mistake—were about to pay.

In the next moment, Aidan Locke was there. Tall, strong, too powerful. His blue eyes glowed with the rage of his beast even as razor sharp claws sprang from the tips of his fingers.

The blond with the gun fired at him, but the fool—he wasn’t using silver bullets and the hits didn’t slow Aidan down for even a moment. Aidan slashed out with his claws, cutting that guy’s wrist, and blood flew into the alley.

Jane’s clothes were soaked with blood. She sagged to her knees. “Aidan…” His name came from her as a rasp.

The blond jumped to his feet and charged at Aidan. He ran right at him and—

Footsteps thudded toward her and a hard hand fisted her hair. “Not so tough now, are you?”

It was the linebacker-wanna-be. Spittle flew from his mouth as he wrenched her hair back even more. “You’re not nearly as strong as I—”

Bam. This time, she was the one who’d fired. Good thing she still carried her service weapon. And here I was…thinking I didn’t need it any longer. The blast went right into his chest, a perfect hit to the heart, and her attacker fell down beside her, gasping out his last breath.

Jane forced her eyelids to stay open a little longer. She was bleeding so much, and an insidious cold swept over her body. Aidan. She needed to get to Aidan…

“Baby, what the hell did they do to you?”

He was above her, no, bending over her. Aidan gently scooped her into his arms and held her so very carefully.

As if she were precious.

As if she weren’t a monster.

Because to him, she wasn’t.

“S-set-up,” Jane managed to whisper. Humans lying in wait for her. Not a good thing. And that could mean… “Need to g-get out of here…could have…r-reinforcements.” She was stuttering. That was bad. She never stuttered and she never felt this cold.

Aidan’s handsome face was locked in lines of fury. “They’ll find the dead when they come looking for their men.”

So he’d killed the blond. Too bad. She would’ve liked to question him. She—

“Shit, baby, how much blood have you lost?”

Enough to make her weak. “Think the bullets…are still…in me…”

He cursed—wonderful, dark inventive curses that had a smile tugging at her lips even as he clutched her tighter and raced from that alley. She hurt, so much, but Jane wasn’t scared. Not when Aidan was there. He’d take care of her. She knew it with certainty.

Death wasn’t an option for her. He’d give her his blood—his wonderful, strong alpha werewolf blood, and she’d heal so quickly.

And once she was healed…

I’ll find out just who the hell planned that set-up in the alley.

And payback would be such a bitch.

Read the rest of the first chapter of Bitter Blood.

Blood and Moonlight
The Complete Series