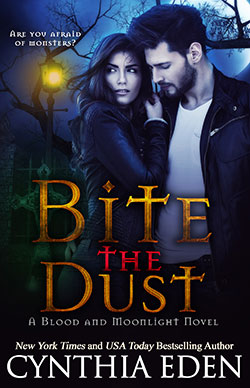 Vampires. Werewolves. Beasts that hunt in the night. When New Orleans Detective Jane Hart investigates her first official homicide case, she never expects to have her world ripped apart. But the murder she’s investigating is part of a deadly war between vampires and werewolves…and now Jane is caught in that eternal battle. A battle that can’t end well.

Werewolf Aidan Locke has been running New Orleans for years. It’s his job to keep the vamps out of the city. But when a Master Vampire comes to town, determined to unleash hell, Aidan knows it’s time to fight with all the fury of his pack. Beast versus vamp, until the last breath. Then he meets Jane…

One look, one taste, and Aidan knows that Jane is far more than she seems. Far more than she even knows herself to be. She’s important in the paranormal war, not a pawn to be used, but a queen to be won. And if he can’t keep her at his side, if he can’t stop the darkness from descending on the town…then Jane Hart will become not just a fierce cop, not some guardian, but something deadlier. Darker. Aidan will fight heaven and hell to change her fate. To change their fate because he is more than just a predator.

And Jane is more than prey. Far more.

The world is changing—for the humans and the monsters. Hot, sexy, and intense, BITE THE DUST is the first novel in New York Times and USA Today best-selling author Cynthia Eden’s dark new “Blood and Moonlight” series.

Jane whirled toward him, her gun drawn and her body surging with a quick, fluid power. Before he could even blink, her gun was aimed at his heart.

“What kind of idiot stalks a homicide detective?” Jane snarled at him.

The woman had bite. He normally liked that, a lot. But this wasn’t about pleasure. This was about business.  Strictly business. “Stalking is a very strong word,” Aidan murmured, “I was merely…hoping for a chat.”

She didn’t lower her gun. “So we could finish our conversation from earlier?”

“Conversation…interrogation…I guess you could call it whatever you wanted, Aidan.”

Ah, so she’d been digging into his life. He wasn’t worried.  The cops knew only what he allowed them to know.  “Aidan Locke,” he said, inclining his head toward her. “At your service.”

The gun still wasn’t lowering.  So, he just stepped forward, and he kept advancing, until the gun pressed into his chest.  “I didn’t kill that poor girl.”

“So your staff at Hell’s Gate told me, again and again. The ME said the victim died less than an hour before she was found.”

Made sense, considering that Aidan knew the killer would have only hunted at night.

“And everyone who works for you was quick to point out that you’d been having some kind of grand opening bash at that time, and you were right at the bar, serving drinks for all to see.”

“Glad you checked out my alibi.”

“I checked out you.” Then, finally, she lowered the gun. But her delicate shoulders remained tense and her chin had notched into the air. “I also sent in one of the uniforms to find you right after that little disappearing act you performed on Bourbon Street, but you were nowhere to be found.”

Light from a street lamp fell onto her face. A rather striking face. Not beautiful, but better.  Her eyes were a bit exotic, turning up at the corners.  Her nose was long, elegant. And her thick hair was slipping out of the ponytail and sliding around her face.  Softening her.

Not now. Business only. Pleasure later.

“I want to help,” Aidan said. The words were true enough. He did want to help. He’d find justice for that poor victim. After all, giving her justice was his job.

“Glad to hear that.”  Jane nodded.

So serious. He knew quite a bit about the new detective. Facts that he’d read weeks ago when she’d first been vetted for the open homicide detective position. Though he doubted the woman realized he’d been the one to approve her promotion. When it came to homicide cops in the Big Easy, he always had final say.  After all, he didn’t want anyone getting in his way.

There was a status to maintain.

“If you’re helping,” she continued, “then I’d like you to turn over your bar’s security footage from tonight.  I could get a court order, but that would just take precious time.  Time I don’t need to waste.”

No, he didn’t imagine that she liked wasting time.

The walk wouldn’t be far.  And the ME would have nothing for her. Aidan had seen to that.

But he fell into step beside her, automatically slowing his faster stride to match up with hers. Her scent wrapped around him—something soft. Feminine. Probably one of those lotions that human women were always using.  He rather…liked her smell.  What was it?  He inhaled again.

Only…there was something more. A deeper, richer scent that was pulling at him. Drawing him closer to her.

“Are you sniffing me?”

“Because that is some weird serial killer shit if you’re doing that. Don’t make me go for my gun again.”

From the corner of his eye, he saw that her hand was already near the holster.

“You smell good,” he said, deciding to go with the truth. “But I’ll try to stop the ‘serial killer shit’ for you.”

“You’d better.”  Her steps didn’t hurry.  She wore boots and jeans. Jeans that hugged her legs and ass ever so well. He’d noticed the ass-hugging earlier, before she’d turned with her gun drawn.  She had on a jacket, one that looked a bit battered, so he couldn’t tell much about her upper body.  He suspected her breasts were as perfect as her ass.

Pity. He only had lies to give her.

Blood and Moonlight
The Complete Series