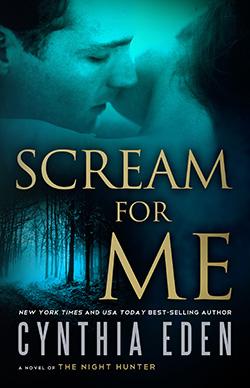 Scream For Me Audio Sample

They were only supposed to have a professional relationship, but FBI agent Kyle McKenzie has been fantasizing about his sexy partner, Cadence Hollow, from the moment they first moment. It takes the darkest case of their careers to finally bring their hidden desire bubbling to the surface. Once they’re in each other’s arms, though, they swear that nothing short of death will part them. The Night Hunter—a cunning stalker whose four-state, fifteen-year abduction spree began in Paradox, Alabama, with Kyle’s sister—may be only too happy to oblige.

In the small town, Kyle must confront the painful past he’s been hiding from Cadence. Kyle vows to put the Hunter behind bars…or in the ground. But the one thing that obsesses Kyle more than his sister’s grim fate—his furious love for Cadence—is the weapon the Hunter will use to lure his pursuers into the mouth of a murderous trap.

Dr. Cadence Hollow was beautiful when she slept. Her defenses were down, her body so relaxed. No fears plagued her, no desperation. All of that was gone in sleep.

Kyle McKenzie studied his partner as the plane slowly descended. Cadence’s head rested on his shoulder. She’d hate that intimate position when she woke. She always tried so hard to keep distance between them.

His fingers skimmed over her cheek. Like touching silk. So soft and smooth. His head had turned toward her, and he was close enough to catch the light scent that always surrounded her.

She was also the embodiment of every fantasy he’d had for the past year.

“McKenzie.” She sighed out his name without opening her eyes. “What are you doing?”

Imagining you naked. Was that such a bad thing? Probably. Since they were partners and they were supposed to have a serious hands-off rule in effect. But a guy could still dream.

The plane jerked a bit. Cadence’s lashes lifted. Her big, golden eyes were startlingly aware for someone who’d been asleep. That was Cadence. Instantly alert.

“We’re touching down,” he told her.

Her head rose, a faint furrow appearing between her brows as she realized she had been sleeping on his shoulder.

Not that he minded being her pillow. Not at all. Especially because she’d been the one to move closer to him.

Then she hurriedly straightened in her seat. “I didn’t realize we’d arrive so soon.”

“It’s been two hours.” Not that he’d been counting. They’d left their base in Quantico early that morning, heading out on another case he already knew would hit too damn close to home.

Hell, he’d taken the case because it hit close. When he’d gotten the phone call from the police captain in Paradox, Alabama, everything had changed. It wasn’t his first time talking to Captain James Anniston.

Because fifteen years ago, Kyle’s sister had disappeared in that same small, southern town.

Vanished without a trace.

There had been no way he could have denied Anniston’s request for assistance. Kyle hadn’t told Cadence about his connection to the town, not yet.

He knew Cadence. She would think he was going to the town for the wrong reasons. To find my sister.

Cadence would be right.

Other Books in Montlake - For Me Series