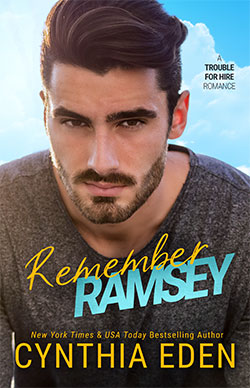 New York Times and USA Today best-selling author Cynthia Eden has a scorching new romance for readers…the dark and dangerous Ramsey is about to have his world shattered.

He doesn’t deserve a second chance.

Second chances and happily-ever-after endings aren’t meant for men like Ramsey Hyde. He’s a criminal mastermind, a cold-blooded heartbreaker, and certainly no one’s idea of a dream guy. Except…once upon a time, this heartbreaker lost his heart.

She can’t remember their time together.

Dr. Whitney Augustine is considered by many to be one of the luckiest women in the world. She survived an attack that should have killed her. But her miraculous rescue came with a twist…she lost the memory of the last six months of her life.  Whitney thought that when she returned to her home, her memories would follow…Unfortunately, they didn’t.

He remembers everything about her…

Whitney is desperate to figure out what happened during the missing six months of her life. So desperate, in fact, that she hires Trouble for Hire Private Investigations to help her out. The last thing Whitney expects is to discover that she was spending all of her nights with the most notorious—and dangerous—man in the area, the inscrutable and infamous Ramsey. Surely there is no way that she and Ramsey were involved in some hot and heavy relationship? They are total opposites and…

She’s never fallen for the bad guy before. Just not her usual style.

Whitney is a criminal psychologist. She profiles bad guys. She doesn’t date them. But all of the evidence—and her own wild, undeniable attraction to Ramsey—sure seems to indicate that she may have been involved with the gorgeous bar owner.

But if they were involved, why the heck didn’t Ramsey tell her sooner?

Ramsey has been keeping secrets from Whitney—and keeping a close watch over her. She might not believe it, but he’s trying to do the right thing for once in his life. He’s trying to protect her by keeping his hands off her. But, surprise, surprise, Whitney has her own secrets, too.   And when Ramsey learns the life-changing secret that she holds so close to her heart, he will risk everything to claim her.

Ramsey has always known he could never, ever be good enough for Whitney…only now things have changed. A target is on her back because others have realized how very important she is to him.  Staying away from her didn’t save Whitney before, so now Ramsey will have to step from the shadows as he pulls her into his world. He will surround her with his protection and if he just works hard enough, maybe one day, she will remember him…and maybe, just maybe…she could even love him.

Author’s Note: It’s time for Ramsey to come out and play! Only Ramsey isn’t exactly the kind of guy who plays nicely with anyone. He’s been obsessed with Whitney from the moment they met, and he’s already had to deal with having his heart ripped apart when he thought she’d died. But Whitney is back in his life again, and this time, Ramsey is determined to protect her.  Get ready for danger, romance, fun, and scorching hot romance! Ramsey is going to fight—hard and dirty—for the woman he wants.

Other Books in Trouble For Hire