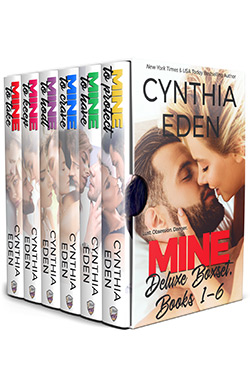 Some desires will push you to the edge…and beyond. Find out just how dark a forbidden need can go in New York Times bestselling author Cynthia Eden’s fast-paced MINE romantic suspense series!

This boxed set includes the following dark and sexy romantic suspense titles: MINE TO TAKE, MINE TO KEEP, MINE TO HOLD, MINE TO CRAVE, MINE TO HAVE, and MINE TO PROTECT. All books in this boxed set are stand-alone reads.

One man will kill to protect her…and another will kill to possess her. When a gorgeous ballerina is stalked by a deadly predator, she must turn to her ex-lover—a powerful billionaire with dangerous secrets of his own—for protection…but is he really her savior or is he the man she should fear the most?

Skye Sullivan is trying to put the pieces of her life back together. She survived a brutal stalker and escaped his abduction, and now she is looking to the future—a future that includes Skye’s lover, billionaire Trace Weston. Skye thinks the danger is finally over for her.

When Trace’s past comes back to haunt him, Skye discovers that the man she loves isn’t quite who he seems to be. Trace has been leading a double-life. And when she discovers the secrets that he’s tried to keep hidden, Skye’s pain and rage may send her running directly into the cross-hairs of a killer…

Nine years ago, Claire Kramer’s lover brutally killed her family, and he tried to kill her. She escaped, but she’s been haunted ever since that attack. Too afraid to trust another man and too worried that her past will catch up with her, Claire never gets too close to anyone. But then she meets Noah York.

Noah York is a man with secrets. The world sees him as a billionaire hotel tycoon, but Noah has a dark and dangerous side. For years, he worked covert military operations before he built his fortune. When it comes to death, Noah is a master. He knows that he should steer clear of Claire, but the white-hot attraction Noah feels for the delicate beauty is instant—and consuming.

From the moment that billionaire casino owner Drake Archer sees Jasmine Bennett, he’s obsessed. Consumed by desire for the mysterious redhead, Drake will do anything necessary to claim her. Yet as desire rages between them, danger is stalking ever closer. Drake’s past isn’t dead, and the ex-Special Forces agent will soon have to face the ghosts he left behind.

Jasmine isn’t who she pretends to be. She’s a woman on a mission—and she’s supposed to be stealing secrets from the mysterious Drake. Falling for him isn’t on her agenda, but when lust and love tangle together, all the rules get broken.

When Elizabeth Ward sees Saxon Black rushing into the backroom of The Blade—a low end bar in Miami—she isn’t sure if he’s there to save the day…or just to raise some hell. But she’s being held hostage, and he’s her best hope of survival. Within minutes, she’s away from the jerks with the guns and riding fast and hard on the back of Saxon’s motorcycle.

Saxon has been working undercover for far too long. When he finds sexy Elizabeth—with a gun to her head—he knows he will do anything to keep her safe. But once he gets her away from her abductors, the threat to her isn’t over. Someone has put a price on Elizabeth’s head, and if Saxon can’t keep her safe from the danger stalking her, then she’ll be dead.

Victor Monroe left behind a brutal past when he decided to become an FBI Agent. He knows that other agents think he’s too cold, that he has ice in his veins, but he doesn’t care what folks say about him. He gets the job done–always. No matter the cost. But then he’s blackmailed into guarding Zoe Peters…ex-showgirl, daughter of a mob boss and drug dealer…a witness who wants to vanish.

Zoe is wild, beautiful, and on far too many hit lists. It’s now Victor’s job to keep her safe–a job that Zoe makes damn difficult. But keeping her alive is his number one priority. It’s supposed to be strictly professional between them. Just another case. Only…Victor never counted on falling for Zoe.