How To Heal A Heartbreak 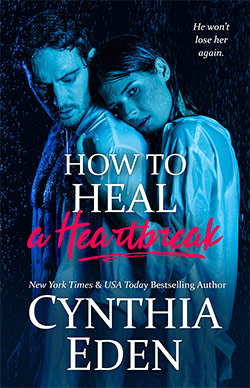 He’s never run from a fight, and he’s not about to start now.

Holden Blackwell, former MMA fighter and current all-around problem solver for the rich and famous, never expects for his ex to appear in his office, asking for his help. Sure, Claudia Fairmont haunts his dreams—and his waking hours—but she hates him, with good reason. Once upon a time, she swore that he’d be the last man she ever needed.

Unfortunately, he’s the only one who can help her now.

The fighter with the tats and muscles for days broke her heart. Crushed it in his powerful fist. She’d vowed never to go back to him, but, now she has no choice. Danger is stalking her. And if there is one thing that Holden can handle? It’s danger. After all, he was the one person who always made her feel safe. She could very much use some safety in the madness of her life. But safety comes with a heavy price.

Temptation. Secrets. And a second chance?

To unmask the threat, Holden has to slip into Claudia’s life and stay intimately close. Luckily, he has the perfect plan already in mind. They’ll pretend to be reunited lovers. He’ll act as if he wants her desperately. That he can’t live without her any longer…A situation that is not far from reality. Because while he’s more than ready to eliminate any and every threat to her, Holden also has plans of his own. An agenda that is long, long overdue.

Step one: Get close to Claudia.
Step two: Prove that he can be the man she needs.
Step three: Eliminate every threat.
Step four: Heal the heart he broke.

This is the biggest and most important battle of his life. It doesn’t matter how many rounds he has to fight, he will go to the mat again and again for Claudia. There is no one who matters more to him, and he will prove himself to her. So ring the bell and let the match begin…

Danger. Romance. Steam. Fun. Another Wilde adventure is waiting for you as this hero goes rogue in order to reclaim the love that he lost. Fight dirty? Get bloody? Bring it. Holden is more than ready to show just how bad he can be for the good girl he lost. No cliffhangers. HEA guaranteed.

How To Protect A Princess
Wilde Ways: Gone Rogue, Book 1