“Once again, the author brings her story to life with well written words that paint brilliant images that make it easy for the reader to imagine and really get a feel for the characters and their emotions in this stirring romantic suspense.”
— Stormy Vixen's Book Reviews, ★★★★★

Her dress was blood-red. A fitting choice. She glided into the ballroom, the red dress hugging her figure, then swirling out near her long, long legs. A thousand white lights glittered around her, making her seem to shine. To fucking sparkle as she lifted her chin high and acted as if she owned that whole room.

There were whispers. Of course, there were whispers. She was Kennedy Clarke, the scandal of the hour, and even though she’d been the one to spearhead this charity party, half the folks there hadn’t thought that she’d actually show for the big event. Not with all the dark and twisted drama surrounding her missing brother Kyle.

But Kennedy just strolled right through the crowd, pausing only to pick up a slender champagne flute. She had to hear the other voices. Remy St. Clair could sure as hell hear them, and he was standing alone near a back wall.

“Kyle killed his fiancée, did you hear? Tortured that poor girl…”

Kennedy paused to watch the band.

“I don’t think they found his body. Do you really believe he killed himself rather than go to jail?”

Her head tilted back. Her long, black hair trailed over her shoulders. She took a sip of her champagne and then went to study the giant Christmas tree that sat in the middle of the room.

“There could be other victims. The police think there are more.”

She smiled as she stared at the tree. At all of the presents underneath it. The charity gala was to raise money for the local children’s hospital. All the guests there had donated hefty sums, and they’d brought in presents for the children.

“Do you think she knew? Did she help him to vanish?”

Her delicate shoulders stiffened. Her head turned, but she didn’t look at the gossiping woman with the overly loud voice. Instead, she looked—

Eyes that seemed to hit him with the force of an electric shock.

He’d seen pictures of her before. He always studied his prey carefully before he moved in. Remy had known that Kennedy was beautiful. Rich, gorgeous, smart. Sexy.

He’d prepared for all of that, and yet…

Seeing her in person somehow made him feel caught off-guard. He didn’t look away from her. Didn’t even force a fake smile. He couldn’t. All he could do was stare into her eyes and realize that he wanted the beautiful and dangerous Kennedy Clarke.

He felt the lust burn through his body. Felt the white-hot attraction that would be a serious problem. But he just went with it. He let the desire burn for her, and he knew it would show in his eyes.

It would show, and the next step would be up to her.

For a moment, she seemed to hesitate. Her chest rose and fell too quickly, but then Kennedy headed toward him. A waiter passed her, and she put her barely-touched champagne flute on his empty tray. Her gaze stayed locked on Remy. And when she was close enough, he caught her scent. Strawberries. She smelled like sweet strawberries.

She offered her hand to him. “I’m Kennedy.”

His fingers took hers. And when he touched her, a deep, hot awareness flooded through him. A primitive attraction that he knew would prove problematic.

Her hand was small in his, soft. Delicate.

She didn’t try to tug her hand free. Just kept studying him. “Thank you for coming to the gala tonight. It’s a very important cause, and I appreciate your support.”

Ah, was that why she’d come across the room? Because this was her event, and she was doing her society princess bit and thanking him for—

The question surprised him. He blinked.

Then she tugged on her hand. “Or not.” Her smile came and went, a flash that never made it to her incredible eyes. “Sorry, I didn’t mean to—”

“I would love to dance with you.” His hold tightened on her hand. He wasn’t letting her go that easily.

Some of the tension seemed to leave her shoulders. But then she bit her lower lip and glanced over her shoulder. “Are you new to this town?”

“You’re Kennedy. You just introduced yourself to me.” He finally let a faint smile curve his own mouth.

When she glanced back at him, her gaze went to his mouth. She stared for a moment, seeming to gather her thoughts, then her gaze lifted to meet his. Her stare sure packed one hell of a punch.

“Let’s have that dance,” he murmured, and, keeping his hold on her delicate hand, Remy led them onto the dance floor. Like the other men at the ball, he was dressed in a tux. High-end. Too damn expensive. He’d even put on the bow tie, though he hated the thing. Made him feel like he was choking. But he’d needed to blend.

Kennedy wasn’t blending, though. The woman was shining bright.

The band started playing a slow, sexy tune. Just as he’d bribed them to do. Because, yes, he’d intended to dance with Kennedy that night. Only he’d thought that he’d be the one to approach her.

He curled one hand around her slender waist and brought her closer to him, so that their bodies brushed. She moved easily in her heels, her steps matching his perfectly.

“You’re a good dancer,” she whispered.

He was passable. She was polite. He inhaled her delectable scent and wondered if she’d feel the growing hard-on that he had. “People are watching us.”

She put her head on his shoulder. Didn’t look at the people around them. “Yes.”

“Because everyone loves a good scandal.”

His hand moved toward her back, and he realized—shit, there was no back to her daring red dress. His fingers touched her silky, bare skin.

“Beauty is only skin deep. Beneath the surface, I could be a monster.”

Yes, she could be.

But then, so could he.

He kept dancing, moving her easily, and enjoying the feel of her in his arms far too much. As far as jobs went, this one didn’t suck.

At least, not yet.

“I guess men don’t usually care, do they? Sometimes, it’s just about what you see.” Now she lifted her head. Gazed into his eyes. “What do you see when you look at me?”

“A gorgeous woman with lips made for kissing and eyes I won’t ever be able to forget.” All true.

Her tongue swiped over her lower lip. “You don’t see the right thing.” Her words sounded like a warning. But then she whispered, “Would you like to come home with me?”

Holy fuck. She’d just asked him to take her to bed? Okay, Kennedy had just thrown his game plan to hell and back. “Uh, Kennedy…”

Oh, shit. The woman was—

Her eyes flew open. A mask had slipped over her face. She stared at him with the cold, expressionless mask of—of a doll. “Thank you for the dance, Remy St. Clair. Good night.”

Then she lifted her dress a few inches—the better to run from the dance floor and head for the door. For a moment, he just stood there, feeling too much like Prince Charming must have felt when Cinderella cut out in the middle of their grand ball.

Only he wasn’t Prince Charming.

And she wasn’t going to escape from him that easily.

He immediately turned to follow her, only to find a tall, curved blonde in his path. She wore a dress of emerald green, one that matched her eyes perfectly, and she put a well-manicured hand on his chest. “Want to dance?”

He wanted to find Kennedy. His gaze darted over the blonde’s shoulder. Kennedy was sure moving fast. She was already at the door.

The blonde followed his stare. Gave a light, mocking laugh. “Trust me, I am saving you from a fate…” Her voice dropped dramatically. “Worse than death.”

His gaze slid back to her. “Don’t remember saying I wanted to be saved.”

Her lips parted. She blinked.

“And thank you for the offer of a dance, but I have other plans for the night. I’m sure a woman as lovely as you will have an easy time of finding a partner.” He gave her a nod, stepped around her, and left her there with her mouth gaping.

He hurried across the floor. The whispers were louder now.

“Sickness can run in a family.”

He was almost at the door.

Anger hummed through his body as he shoved open the door. The ballroom was located in an elegant New Orleans hotel. A curving staircase—one lined in lush, red bows—led down to the first floor. Kennedy was already stepping off the stairs.

He hurried after her.

She was fast. Impressive, in her heels.

She turned onto a narrow corridor. One filled with small Christmas trees and pale, white lights. She rushed forward, her dress trailing behind her with a rustle of silk.

She hesitated at his call, pausing only a moment, and he saw that a doorman waited nearby. When Kennedy looked back at him, Remy could have sworn he saw tears on her cheeks. Impossible, of course.

Kennedy Clarke was supposed to have a heart carved from ice. She couldn’t be crying. Not there.

Kennedy whirled away from Remy and hurried for the door. The man there opened it quickly, holding it for her as she disappeared into the night.

A moment later, Remy shoved past the doorman, too. He burst into the night air—air that held only the faintest chill. The holidays might be coming, but this was still the Big Easy. Temperatures barely dropped at all in December.

Kennedy was hurrying toward a waiting limo, one that sat near the opposite street corner. She was moving so quickly—

So quickly that she didn’t notice the car speeding toward her. A car with too bright lights that was moving helluva fast.

She froze. Seemed to get caught, like a deer in the headlights, as she gaped at the car hurtling toward her.

She leapt forward, but that car—it changed positions and shot toward her.

The driver is aiming for her.

Not on his watch. Using all of his energy, Remy raced for her. He grabbed Kennedy, and they both flew forward as he shoved them toward the limo. They hit the ground, and he grabbed Kennedy, hauling her behind the rear of the limo, getting her out of the way just as the crunch of metal filled the air.

That sonofabitch had just hit the limo. The other vehicle hit the limo and careened down the road.

That sonofabitch had almost killed Kennedy.

Tires squealed, and the smell of burning rubber filled the air as the vehicle raced away.

“Jesus, baby…” Remy’s hold on her tightened. “Are you all right?”

A tear slid down her cheek. 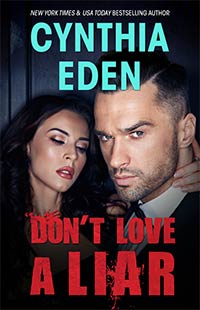