Wrapped Up In You 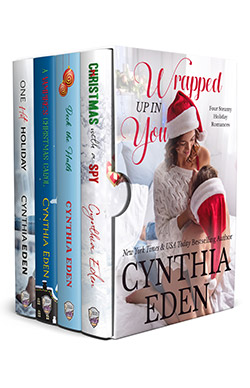 ONE HOT HOLIDAY:
On the run from her dangerous ex, Haley Quick escapes to the tiny town of Point Hope, Alabama—a place gone crazy for the holidays. This grinch feels like she doesn’t belong, but then Haley meets sexy sheriff Spencer Lane. Spencer is determined both to protect Haley and to show her that the holidays can be magical for her again…

A VAMPIRE’S CHRISTMAS CAROL:
Ben Prescott hates Christmas—he’s a vampire, and to him, there’s certainly nothing jolly about the holiday season. But three visitors are coming Ben’s way…A demon who will force Ben to face his past, a ghost who will show Ben the present he could have, and a shifter who will reveal the darkness that waits in Ben’s future. Ben’s redemption rests in the hands of the one woman he loved and lost—Simone Laurent. If Ben is going to have a chance at being more than just the beast in the darkness, he has to prove himself to the lovely Simone.

DECK THE HALLS:
Christie Tate is so over being good. This year, she’ll be topping the naughty list, thank you very much. And step one in her grand scheme? It’s seducing the man she’s always wanted…sexy police detective Jonas Kirk. For years, she’s wanted Jonas, but he’s her brother’s best friend, and she thought he was off-limits. Will he help her to get her naughty Christmas wish?

CHRISTMAS WITH A SPY:
Everyone in town thinks that Jemma White is as sweet as the delicious treats she makes at her chocolate shop—but they’re wrong. Jemma is ready to let her wild side out, and she’s just found the perfect man to make all of her fantasies come true. Grayson Cole is a too-sexy-to-be-true stranger who has escaped to Holly for the holidays. He is her perfect temptation, and Jemma can’t wait to steam up the cold winter nights with him. But when danger from Grayson’s past follows him to town, she realizes that the man she is falling for has been keeping some very dark secrets…secrets that may just get them both killed.

Author’s Note: Merry Christmas! I absolutely love this season! So I have bundled four of my sexy holiday romances together in this box set. Gift yourself some hot stories and some cozy reading!