“Wicked Ways” in When He Was Bad 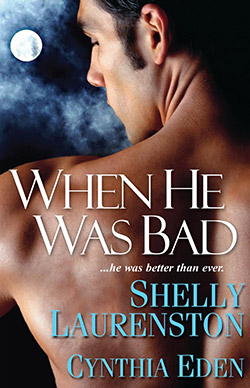 “Wicked Ways” in When He Was Bad Audio Sample

Blurb told from the POV of Cain Lawson, the hero of Wicked Ways…

I’m too dangerous for her. I know it, but I can’t get my sexy new neighbor out of my head. When I hear her scream one night, the absolute last thing I expect to see is Miranda Shaw–star of my hottest fantasies–being attacked by a vampire. Now the undead jerk is after her, and I’m the only thing standing between the beautiful lady and a killer who just won’t stop. Well, too bad for him, because that vamp has just made the worst mistake of his afterlife–he’s tangled with a shifter. And Miranda, well, she’s so busy watching out for him that she won’t see me closing in on her–not until it’s too late–and I’m about to show her just how wild I can get…

“You don’t have to thank me.” A deep rumble of sound, almost like a growl.

The man had the deepest, roughest voice she’d ever heard. One that made her toes curl and her thighs quiver.

Her hormones were going crazy and her mind was turning into mush. Had to be the excitement of the night.

“I did what any man would have done.”

She shook her head at that. “Uh, no.” Miranda could still see the men locked in brutal combat. “I don’t know many guys who would have kicked down a door to save me.”

He caught her hand. Brought her fingers to his lips and pressed a kiss to the knuckles. “Then you don’t know the right kind of men.”

Oh, damn. Now her knees were shaking. And was he staring at her with hunger in those golden eyes?

He kissed her hand again, and for a second, she felt the warm brush of his tongue against her fingers. Miranda tensed. “I-I should be going to bed.” Alone. Because while her hormones might be jumping on the adrenaline party, she wasn’t about to go falling into bed with her neighbor. Even if he had quite probably saved her life.

And even if he was sexy as all hell.

And even if just the sight of him did have her whole body tightening with arousal.

She pulled her hand away from Cain’s warm grasp. Stepped toward the guest bedroom he’d shown her earlier.

“If that’s what you want…” The words were soft.

For an instant, she imagined him. Following her into that dark room and stripping.

Miranda swallowed, felt the faint sting along her throat. “Thank you, Cain. Really.” Her fingers wrapped around the door frame.

He gave a faint nod.

Miranda turned away from him, stepped over the threshold.

“Just got one quick question for you, baby,” he murmured, and the floor squeaked beneath his feet.

Glancing back over her shoulder, she waited.

His dark brows pulled down low over his eyes. “Why the hell were you out with a vampire?”

“Wicked Ways” is a wild ride through the paranormal world of vampires, shapeshifters and things that go bump in the night. Ms. Eden has combined a sexy, sizzling hot story with an edge-of-your-seat mystery thriller all rolled up in good ole down-home humor that will keep you alternating between sitting on the edge of your seat and falling off your chair in laughter.” –Affaire de Coeur, 4 1/2 stars for WHEN HE WAS BAD

“WHEN HE WAS BAD is magically original with blazingly scorching storylines and characters who will long be remembered…’Wicked Ways’ is instantly entrancing from the first attention-grabbing scene and will keep readers highly anticipating every engaging word.” –Amelia of Sensual

“Cynthia Eden grabs your attention from the very first page and keeps you immersed in the storyline until the very end…WICKED WAYS brings out the sexiness in the truly Alpha male while still presenting the evilness that lurks in the hearts of others.” –Chrissy of Romance Junkies, Blue Ribbon Rating of 4.5