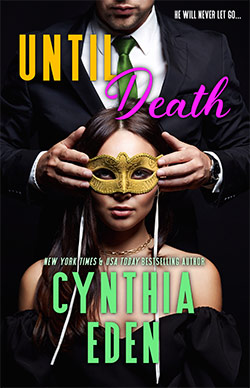 When Ivy DuLane witnesses a murder during the madness of Mardi Gras, she enters a deadly cat and mouse game with the killer. The city has gone wild with the annual celebration, and Ivy has to rely on sexy homicide detective—and her ex-lover—Bennett Morgan for help. But with every moment that passes, the killer grows bolder, and the body count starts to rise. It soon becomes very hard to tell the innocent from the guilty…especially since Bennett is keeping dark secrets of his own.

Author’s Note: UNTIL DEATH was originally released in the SWEET DREAMS thriller anthology (an anthology compiled by author Brenda Novak to raise money for diabetes research). The anthology is no longer available for purchase, and UNTIL DEATH is now available as an individual read. UNTIL DEATH is a complete story, and it does not contain a cliff-hanger ending.

Ivy DuLane was trouble. Always had been, for as long as he could remember.

Did she really think no one would notice her? The damn woman couldn’t go any place without being noticed.

Bennett put his hands on his hips and glared up at the escalator.  Its occupants were slowly descending to the ground level of the convention center, a line of women in their designer dresses and men in their tuxes—with tails.  The men had perfectly knotted bow ties. The women had dresses that fit like gloves.

And right in the middle of that crush, wearing a green gown with a slit that exposed far too much of her gorgeous leg…was Ivy.

She was supposed to be home, safe!

Instead, she was walking right into danger, and damn if the woman wasn’t on the arm of a bozo wearing a white mask. A mask that far too many other men at that ball were also wearing.

As soon as she reached the ground level, Bennett stalked right toward her.  Fury pumped through him. Did she think this was all some kind of game? The woman was crazy, way out of her league.

He stepped into her path.

Her eyes widened. Eyes now lined with shadow and mascara. Eyes that looked even darker than he remembered.

I’m not the one wearing a mask.  And I am not even close to being your buddy.

Cameron slapped his hand on Bennett’s shoulder. “It’s been too long.”

Actually, Bennett rather thought it hadn’t been long enough. “She shouldn’t be here.”

Over their shoulder, he spotted the other couple. Ivy’s twin brother Hugh and a curvy redhead.  Hugh didn’t look overly happy to see him. Not surprising, really. Hugh had once ordered him to stay the hell away from his sister.

Bennett had stayed away, for a time.

But he was back, and everything was about to change.

He reached for Ivy’s hand. “When I send you home with police protection, you’re supposed to stay home.” He walked right around to the other escalator—the one that would take her back up to the second level and away from the crush of people. “You’re not supposed to just stroll in here and—”

“You think the killer might be here, too, right?” Ivy asked.

For an instant, his eyes squeezed closed.  Maybe he should have anticipated that she’d show up there. It had really only been a matter of time before she connected the guy’s white mask with the Order of Pharaoh’s ball.

Bennett had made the connection as soon as she told him about the mask, and he’d known that he would be scouting around that ball scene.

“When I saw Cameron’s mask, I knew the guy could be here tonight,” Ivy added.

His eyes snapped open. “And, what?” Bennett growled. “You thought you’d use yourself as bait here to lure out the killer?”