The Thief Who Loved Me 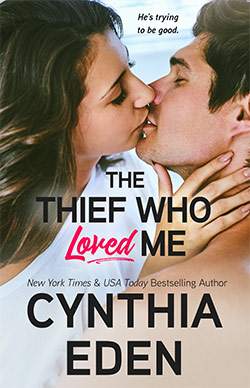 It’s hard to be good. And rather exhausting…

After a lifetime of sin, Rembrandt “Remy” Stuart is finally on the road to redemption, but a former bad guy must always watch out for temptation. His temptation? It comes in the unexpected but ever-so-seductive package that is Jacqueline Peters. One look, and he’s hooked.

From the moment he sees her, Remy is inspired.

He’s never been one to rush to the rescue—not really his thing—but when a shoeless Jacqueline enters the crowded bar, Remy can practically feel her fear. The beautiful woman is running from something—more like someone—so Remy decides to be her knight in severely tarnished armor. For a price, of course. Because nothing is ever free. Certainly not him.

His price? Jacqueline will be his muse.

He’ll give her a job and a safe place to stay, but, in return, she has to pose for him. She’ll be his model as Remy finally tries to create work of his own and not, ahem, just incredible forgeries that can be used by all sorts of dangerous criminals—the people that Remy knows too well. And if Remy and Jacqueline happen to give in to the burning hot attraction between them, attraction that grows even hotter with every moment that passes, then who is he to argue with fate?

She needed a hero. She got the bad guy.

Jacqueline is sweet and good, careful and controlled, and she may just be everything he ever wanted. And she mistakenly thinks he’s some kind of hero. Adorable but…so not the case. When danger from her past follows her to Remy’s, he’ll have to show her who he really is. Because there is no way that he’s going to let anyone hurt his muse. Being good can only get a man so far.

Author’s Note: THE THIEF WHO LOVED ME is a stand-alone romance with a guaranteed happy ending. Sometimes being good can be so very hard, and Remy was never really cut out for the “good” life. Remy is about to have his world turned upside down, but don’t worry, some of his “Wilde” friends will be there to help him out.

Other Books in Wilde Ways

Fighting For Her
Wilde Ways, Book 5

Chase After Me
Wilde Ways, Book 9

The One Who Got Away
Wilde Ways, Book 12